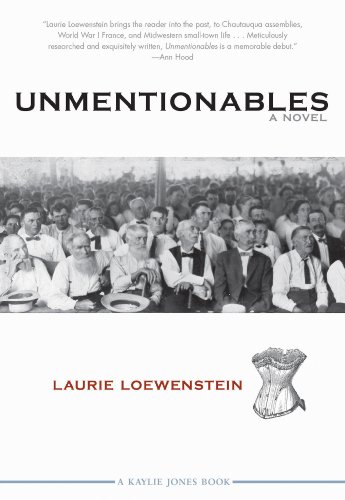 “. . . a sweeping and memorable story of struggle and suffrage, love and redemption, . . .”

Women’s underwear isn’t the only unmentionable in Laurie Loewenstein’s debut novel. Restrictive and confining as it was in the early part of the 20th century when this fascinating story is set, it’s actually a metaphor for all sorts of other unmentionables of the time—including votes for women.

But it’s not underwear that’s uppermost in the minds of the townsfolk gathered in a large tent in the small mid-western town of Emporia on a muggy August night in 1917.

Greeting neighbors and fanning away the heat and the midges with their programs as they wait for the night’s event to begin, a few might wonder what “Barriers to the Betterment of Women”—a lecture to be delivered by Chautauqua circuit speaker Marian Elliot Adams—is all about but most are just looking forward to a sociable evening out.

Those who give it any thought at all assume it will be a call for more female colleges, or for women’s voting rights.

At worst it might be a blip in the season’s entertainment, tucked between orchestras and elocutionists, adventurers and chalk artists—all part of a tradition of travelling edutainers whose appearance is eagerly anticipated.

Originally a retreat for Sunday school teachers in western New York, the Chautauqua movement has evolved into a commercialized venture dedicated to taking “edification and culture” into America’s rural heartland. Now the circuit’s presentations are a vital element in the lives of the country folk it serves, to be pulled from the depths of summer memories and relived through winter’s bleak boredom.

Marian’s is a speech those who heard it wouldn’t have to delve too deeply to recall:

“I am here tonight,” announced the striking woman in the striped silk caftan and red Moroccan sandals, “to discuss the restrictive nature of women’s undergarments.”

She had their shocked attention.

“Did you know,” she continued, “that a woman preparing to go out in public routinely dons 25-pounds of clothing? Imagine! And of that, almost all of it is hidden from view. And almost all of it serves no practical purpose.”

While hourglass figures and tight lacings were thankfully a thing of the past, the constricting combination suit, petticoat, corset, corset cover, hose supporter, and hose still worn daily were both symbolic as well as real hindrances for women.

That was why, explained Marian firmly, dress reform was such a vital tool for the modern woman.

Ironically, it’s her own unconventional dress that is almost Marian’s undoing that night. Right after her talk, bending down to speak to an admiring young woman, her outfit catches on a loose nail sending her tumbling down the stage’s wooden stairs.

She’s forced to remain in the small town for a week, with far-reaching and permanent consequences for practically everyone she meets—from Negro youth Emmett who drives her around, to widowed newspaper editor Deuce Garland, who shies away from the shameful but open secret of his bloodline.

Unmentionables is a sweeping and memorable story of struggle and suffrage, love and redemption, encompassing small-town prejudice, big-city artists and anarchists, and remarkable acts of courage far away in First World War France.

Anchoring her story in accurate historical fact, Loewenstein has skilfully woven a story and a cast of characters that will remain in the memory long after the book’s last page has been turned.