Unmask Alice: LSD, Satanic Panic, and the Imposter Behind the World's Most Notorious Diaries 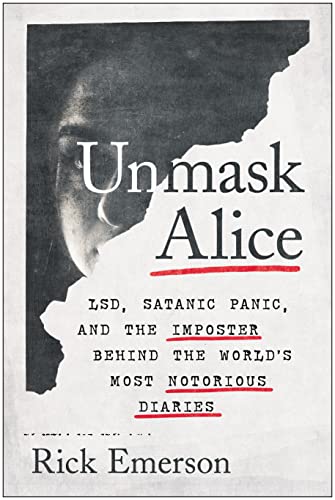 From the very start of Unmask Alice: LSD, Satanic Panic, and the Imposter Behind the World’s Most Notorious Diaries, Rick Emerson makes big promises. In the author’s note that precedes the prologue Emerson acknowledges that media hypes of deep dives and new revelations often fall short. He argues that Unmask Alice, in contrast, will not disappoint—if readers follow him. It is an important clue to how this nonfiction account of a diary, a con artist, and a devastated family will unfold. The story is very much through Emerson’s mind’s eye, which wanders in many directions. This can be extremely rewarding as well as occasionally exasperating.

The storylines are so numerous it is hard to sum up Unmask Alice in a few lines. The main focus is the woman the narrative starts and ends with, Beatrice Sparks. It is Sparks’ story that stands at the center of almost every fascinating tendril Emerson introduces.

Sparks is the “anonymous” author behind the 1971 bestseller Go Ask Alice, which, according to Emerson, has sold nearly six million copies. Advertised as the diary of an actual 15-year-old drug user, its various editions have been marked as fiction, “not fiction” and “autobiography” over the years. The mystery of what is real and what is not in this enormously successful young adult book drives the first part of Unmask Alice. Emerson is interested not just in unearthing the falsehoods of Go Ask Alice but also in finding the reasons behind its existence and popularity. To do this he explores psychedelic drug history, covering it not through legislation and policy but through people. LSD is introduced via the Swiss chemist who first synthesized it, Albert Hofmann. After testing his creation Hofmann sees a stream of colored figments for two hours.

“They moved and merged without friction, collapsing and growing like liquid flowers.”

Hofmann is left experimenting and Emerson moves on, delving into former US President Richard Nixon’s “war on drugs” through the story of a father—celebrity Art Linkletter. In 1969 Linkletter’s 20-year-old daughter Diane died after jumping out of a sixth-floor window. Linkletter claimed she was on LSD or having an LSD flashback at the time. According to Emerson, the coroner never tested Diane for LSD. So the truth remains a mystery.

These mini stories about Hofmann, Linkletter, and others help lure the reader in. The larger mystery of who the Alice of Go Ask Alice is surfaces at the end of most chapters where Emerson sprinkles clues propelling the narrative forward. Although much of what Emerson recounts occurred in the previous century, observations about the media and audience remain relevant today. Readers of Go Ask Alice were “primed to see Alice as true, whatever its flaws and gaps.”

The same seems to have held true for Sparks' next big successfully edited teenage diary, Jay’s Journal. The mystery behind Go Ask Alice is set aside for the story of Alden Barrett, the teenager behind Sparks’ edited diary. It is all fascinating and richly detailed, but at times it seems like it should be another story entirely. Emerson deals with this by separating his book into five parts.

While Emerson uses an almost journalistic style, his former role as a radio host comes through in his outrage and sometimes snarky asides. Some readers will find this attractive. Others may find it distracting. There is so much here though that before a reader becomes too annoyed by a detailed side story, Emerson is on to something else.

Emerson does his best to answer the questions raised about the girl behind Go Ask Alice and the truth behind Jay’s Journal, doing far more than previous media, if his own account is to be believed. He interviews Alden’s younger brother and provides details of the aftermath of Alden’s suicide without holding back.

“Blood soaks through everything given time, and dried brain matter might as well be superglue—even chisels won’t take it off.”

The specifics and details make Emerson’s final revelation all the more difficult to understand. After a book that focuses on the murkiness and untruths of authors and the publishing industry, Emerson gets muddy. He uses pseudonyms. His reasoning makes sense, but it remains disappointing—all the more because it comes late in the book after we have been waiting so long for an answer. Yet that section may be what makes the book more real than all the sections that precede it. There is no clear answer. This book, in the end, is about humans and no one can truly know another. As Beatrice Spark’s own son LaVorn Jr. told Emerson of his mother: “No one knows her story . . . including me.”