The Universe Versus Alex Woods 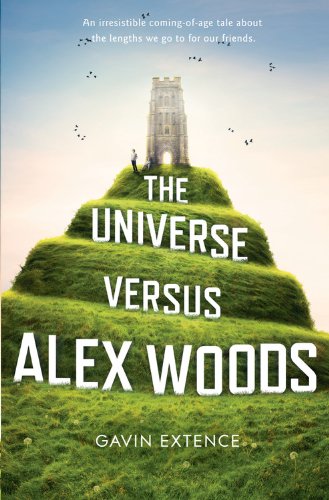 “Gavin Extence has written a book that is richer, more lucid than it seems on its surface.”

The British newspaper The Observer summed up Gavin Extence’s new novel The Universe Versus Alex Woods with few words:

The reference to present-day poet and novelist Haddon aside, it is the shout out to Kurt Vonnegut that registers if only because it is all but insisted upon by Extence that KV get at least mentioned in every review (if not seen as a spiritual godfather to our adoring young author) given the fact that Vonnegut seems to be identified as everything from touchstone to mentor to chief metaphor throughout the text.

It’s Vonnegut this and Vonnegut that, as young Alex Woods discovers Sirens of Titan, which leads him on to Cat’s Cradle and then to (a personal favorite) Breakfast of Champions, which incites him to form “The Secular Church of Kurt Vonnegut:”

“A book club for people interested in all or some of the following: morality, ecology, time travel, extraterrestrial life, twentieth-century history, humanism, humor, et cetera.”

All of these topics, of course, are contained within the writings of Kurt Vonnegut, whose 14 published works are the topics under discussion at the “church.”

Much of Versus Alex Woods reads like a term paper entitled “The Person I Admire Most, Writer Kurt Vonnegut.”

“What I really liked about Breakfast of Champions was this: unlike most books, it didn’t assume that the reader knew very much about anything—neither about human beings nor their customs nor the planet they inhabited. It was written as if its reader were, most likely, an alien from a distant galaxy, which is to say that it explained everything, from peas to beavers—often in rather eccentric detail, often with accompanying pictures and diagrams.”

Perhaps because of this Versus Alex Woods comes complete with a few diagrams of its own, as well as the occasional poster and sections printed as if written by hand.

Thus it seems, in its way, something less than an homage to be beloved author and something more like a case of literary stalking.

In fact, nothing has been quite so Vonnegut-ty as this since the man’s own last novel, Timequake.

References to the man and his work are to The Universe Versus Alex Woods what wild flowers are to the Texas highways—they are scattered nearly everywhere and provide what little color you are able to discern as you look out into the void.

If only Extence were less reverential toward Vonnegut and instead were, like Vonnegut, more irreverent in general or, also like Vonnegut, seemingly incapable of writing anything old school, of aping anything typical or tired in modern fiction.

Instead, in Versus Alex Woods, we are given a trio of bullies who are, jointly and singularly, only a magic wand away from those who plagued poor Harry Potter through all those books. And a grubby, angry little Goth girl with a loving heart who seems to lurk on every playground in modern British fiction. And a muggle of a single mother who dabbles in the wiccan way of life.

And there’s a good bit that is Potter-ish in Alex Woods as well. There’s the distinctive scar, for example (although, admittedly, each boy got his own in a unique manner—in this case, Alex manages to be struck in the head by a meteoroid, an encounter he miraculously manages to survive, just as Harry did that nasty spell). Both Alex and Harry have them, and in each case they become a jagged banner of survival.

Both are special as well. Linked to fate. Destined for Great Things.

You get the idea.

On first read, for all its humor, for all its lighter-than-air zip and quip, The Universe Versus Alex Woods (such an awkward, unfortunate title) is a B-picture of a thing. Readable, even enjoyable. Nothing more.

But then there’s this as well: the fact that Extence, in setting the universe against little Alex Woods, manages something like a hat trick, something downright Vonnegut-esque.

Just when Alex is set upon by the bullies and, in escaping them, manages a “meet cute” with an irascible, if eccentric, old guy named Mr. Peterson and his loveable old dog named, wait for it, “Kurt,” and just when the entirety of the narrative (which has, to this point, been doing little more than piling eccentricity upon eccentricity—meteor boy becomes epileptic due to the blow to his head and suffers his malady colorfully, meteor boy is raised by a single mother who believes in kooky alternative things like homeopathy and tarot cards, meteor boy is visited by a British scholar who dresses “as if she selected all her clothes at random from a 1950s jumble sale”) seems likely to give the lad type II diabetes in addition to everything else he’s suffered, the world rotates on its axis, the tides turn and the universe plays its trump card.

Suddenly, without the tonal shift of a Terms of Endearment, the book manages an exploration of not only death but of doctor-assisted suicide as well, all without cutting back on the whacky, and, in doing so, manages to get the reader to root for the painless death.

All of which is a very Vonnegut-tory thing to do. And recalls very nicely the words that KV inscribed on his character Billy Pilgrim’s tombstone:

“Everything was beautiful and nothing hurt.”

Which seems a likely explanation for the universe in The Universe Versus Alex Woods is located as well—a place in which it may be argued that enlightenment comes by virtue of being meteor-addled.

But what can the reader take away from this text, one that borrows nearly as much from books of astronomy and physics and neuro-biology as it does from Vonnegut?

Perhaps this, where Alex, as he often does, addresses the reader directly:

“There are two ideas I want you to think about at this point.

“(1) In life, there are no true beginnings or endings.

“Events flow into each other, and the more you try to isolate them in a container, the more they spill over the sides, like canal-water breaching its artificial banks. A related point is that the things we label ‘beginnings’ and ‘endings’ are often, in reality, indistinguishable. They are one and the same thing. This is one of the things the Death card symbolizes in tarot—an end that is also a new beginning…

“(2) The universe is at once very orderly and very disorderly . . .

“It’s possible to find order in chaos, and it’s equally possible to find chaos underlying apparent order. Order and chaos are slippery concepts. They’re like a set of twins who like to swap clothing from time to time.”

Or perhaps simply this: that by smearing his writer’s lens with essence of Vonnegut before using it to show us the universe of Alex Woods, Gavin Extence has written a book that is richer, more lucid than it seems on its surface. That perhaps is better than it actually is. In that the concepts (many lovingly borrowed from you-know-who, whose books we may all be better off reading) contained within are so much stronger than the words that contain them.

Which makes The Universe Versus Alex Woods a hard book to like.

And a harder book not to.