Universe of Two: A Novel 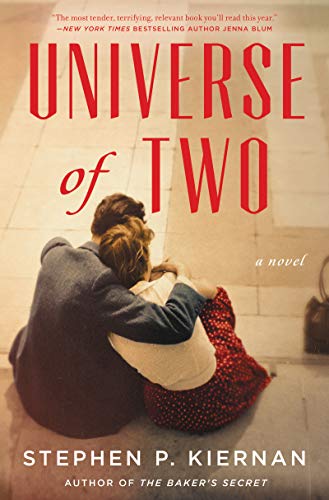 “Universe of Two is a love story. . . . It is an honest, compelling tale of the human cost of war and the fight that occurs when war ends and redemption begins.”

War changes everything. Charlie Fish is a brilliant mathematician at Harvard with a bright future ahead of him. But it is World War II and the country needs soldiers, not mathematicians. Charlie is not soldier material, and his mother arranges for him to be a “math boy” working for his uncle in snowy Chicago. Charlie doesn’t understand the scope of what he’s doing, but he knows he doesn’t want to kill anyone.

Brenda Dubie dreams of attending a music conservatory, but the war has taken both her father and her brother for the effort, and she is left behind to help out in the family music store. Used to having plenty of dates, Charlie Fish is not what Brenda is accustomed to. But when Charlie finds his way to her music store they fall in love.

When Charlie is called away to the deserts of New Mexico, Brenda finds a job as a church organist and follows. After a disastrous first meeting, where she harshly criticizes his misgivings about the project he is working on, they mend their relationship. He had been contemplating resigning from the project, but she convinces him that what he’s doing is the right thing for the country.

But Brenda is unaware of the scope of the project that Charlie is working on and the importance of the mechanism he is responsible for. Conflicted, Charlie continues working on “The Gadget” that will detonate a bomb like none seen before. His success only fills him with unease, but with the war winding down in Europe, he hopes it will not be used.

After witnessing first hand the destruction “The Gadget” is capable of on the desert sands of New Mexico, Charlie’s doubts and the understanding of his own complicity overwhelm him. When the bomb is finally used, the devastation and death toll are breathtaking in their scope.

Once the pictures and details of the bombings in Hiroshima and Nagasaki come to light, Brenda understands Charlie’s crisis of conscience and realizes her own culpability in convincing him to compromise his integrity.

After the war, Charlie’s uncle arranges for him to attend Stanford and obtain his Ph.D. in physics. But his past follows him, and he is spoken of as a hero. His notoriety makes him uncomfortable, and realizing that anything he works on will have military implications, he is conflicted. In the end, it is Brenda who convinces him to follow his conscience. After her disastrous persuasion for him to continue working on “The Gadget” she urges him to do something he will love. He leaves Stanford and, together, they spend the rest of their lives seeking redemption in the creation of something sacred.

In Universe of Two, author Stephen Kiernan frames his narrative in alternating chapters of first-person accounts by both Charlie and Brenda. With Charlie’s narration being told through present-tense war time, and Brenda’s looking back through older and wiser eyes, this telling is an effective tool to merge both the urgency of the moment and the lessons learned from it.

Through Charlie’s present moment doubts and Brenda’s future reflection, the reader is able to feel the frustration and fear that occur when an enemy will not surrender while friends and neighbors are dying, along with the weight of the aftermath of Hiroshima and Nagasaki.

Sadly, the predictions that atomic weapons would end war did not come true. But Universe of Two is neither a justification nor an apology. Rather it is an even-handed examination of the urgency of war against our own complicity in the violence we visit upon others.

Ultimately, Universe of Two is a love story. It carries within it a powerful story of hope without minimizing the weight of the effects of war. It is an honest, compelling tale of the human cost of war and the fight that occurs when war ends and redemption begins.