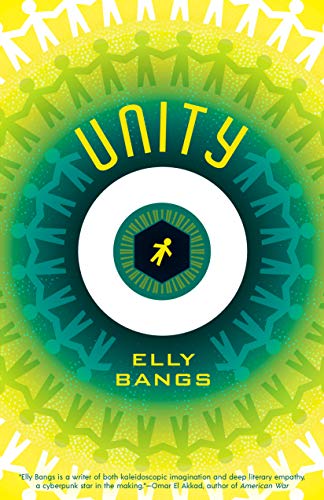 “Elly Bangs has created a vivid, fascinating, and utterly believable future world, and she immerses the reader into it skillfully and seamlessly.”

In 2159, humanity has survived multiple near-annihilations, but in the process the earth has become nearly uninhabitable. Danae, a techservant in the underwater Bloom City, hires Alexei, a newly retired enforcer for Bloom’s cruel leaders, to escort her and her lover Naoto to her homeland in the wastes of Arizona. What starts as a straightforward if not simple task rapidly devolves into a desperate race across the barren desert, pursued not only by Bloom’s legions of bloodthirsty trackers and a looming, unstoppable wave of destruction from across the sea, but also by their own personal ghosts.

The novel shuttles back and forth largely between the POVs of the two main characters, Danae and Alexei. Both individuals are damaged, carrying the guilt of atrocities past, and the novel does an excellent job gradually and delicately exposing these atrocities as well as their emotional costs.

Danae appears physically as a 30-something woman of African descent, though in fact she contains multitudes—a statement which is neither hyperbolic nor metaphorical: thanks to a cybernetic nanobot-implant, she is the vessel for hundreds of unified minds, and she is capable of unifying with more. This condition gives her the capacity for near-universal empathy and the potential to meld the knowledge and intellects of hundreds of people, but it has also made her a target, forcing her to go into hiding. After years of isolation in Bloom City, she longs to find the rest of her selves and rejoin them.

Alexei’s appearance is likewise misleading: he is an imposing, scarred warrior, and upon first meeting him Danae “shuddered with the instinctive knowledge that the sight of him had been other people’s last,” but after a lifetime of carnage his only remaining desire is his own death. Finding himself unable to perform that act personally, he agrees to Danae’s proposal under the presumption that it will be, in essence, a suicide mission.

Two other characters arise as occasional narrators: “Borrower,” a figure from Danae’s past whose reliability could best be described as “questionable,” and “I,” whose identity is less defined and more fluid.

The various narrative strands weave together toward an inevitable confluence, as Danae and Alexei struggle to stay a step ahead of their pursuers while chasing a desperate hope. Meanwhile, a long-simmering war between the two major global powers, Epak and Norpak, ignites and releases a distant but unstoppable apocalypse: a wave of destruction that promises to completely eradicate all life on the planet entire.

Beyond the immediate tension of their plight, however, Danae is called to question the true effects of her unified minds. If all minds join in harmony, would it lead to a utopia, technologically advanced and free of hatred and strife? Or could there be darker consequences? Early in their adventure, Danae meets an artist with whom she discusses the challenges of expressing meaning through imperfect means, and she proposes:

“‘. . .what if there were no translation? No medium, no middleman? You could have a thought, a feeling, and you could share it with someone else. No loss or misunderstanding. No noise.’

Their exchange, while brief, foreshadows the complexity of Danae’s condition as it reveals itself throughout the novel’s arc.

Elly Bangs has created a vivid, fascinating, and utterly believable future world, and she immerses the reader into it skillfully and seamlessly. This is the sort of novel that demands attention and often benefits from revisiting earlier chapters, as hundreds of tiny clues can be easily overlooked on a first pass. The subject matter may be bleak, but the novel is never anything less than captivating.

With subjects that explore the possible connection—or disconnection—between minds and bodies, the novel has echoes of Richard K. Morgan’s Altered Carbon or the Netflix series Sens8, but this is an entirely original and ambitious creation. Philosophical questions raised by the novel tend to worm their way into the reader’s brain like cybernetic nanobots, lingering in the subconscious long after the novel’s conclusion.