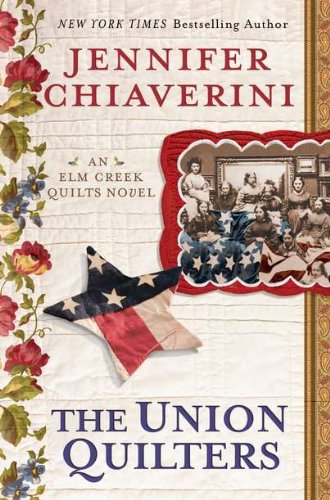 Consider the women of Water’s Ford, Pennsylvania, in Jennifer Chiaverini’s newest novel, The Union Quilters. While their men prepare to heed President Lincoln’s call to abolish slavery, these women are stoically preparing to send them off to possible deaths while tending the hearth, caring for the children and everyone else left behind, and supporting each other through the interminable wait for those husbands and sons, fathers, and brothers to return.

Little wonder that President Lincoln—whom Ms. Chiaverini quotes at the beginning of the novel—had such a reverence for American women like these. Speaking of the relief efforts undertaken for soldiers, Lincoln noted that: “In this extraordinary war, extraordinary developments have manifested themselves … and amongst these manifestations nothing has been more remarkable than these fairs for relief of suffering soldiers . . . and the chief agents in these fairs are the women of America.”

The women in Ms. Chiaverini’s novel play their part in this relief with the quilts they make. Their gathering in quilting circles is not only a way to help the soldiers, though, but also a way to keep each other strong through frightening and uncertain times.

Among these women is Dorothea Nelson, who sends her school-teacher-turned-farmer-husband off to battle with her favorite quilt—appropriately named Dove in the Window—to keep him warm. Still, she wishes that she could tell him not to go, as she is pregnant with their second child and wants him home and safe. There is also Constance Wright who knows her husband Abel would fight in this cause but the army won’t let him enlist because he is black. Gerda Bergstrom has a different dilemma; she has to watch as Jonathan Granger, the man she loves, is sent off to war by his wife.

These—among others—are the kind of strong female characters that Ms. Chiaverini has created in her Elm Creek Quilts series of novels. A New York Times bestselling author, her strength is not only writing such characters, but also placing them in interesting lives and times. In The Union Quilters, her characters live in a pivotal moment in American history—the Civil War. Ms. Chiaverini also provides them with an iconic symbol of warmth and safety and home—the quilt —which may also come to symbolize the stitching together of a torn-apart nation.

Moving back and forth between the women at home and the men on the battlefield, Ms. Chiaverini not only knows her characters well, but obviously likes them even more, investing care in the details that make up their lives. Surprisingly, though, there is not as much discussion of quilts and quilting as I thought there would be, but with more than 1.5 million copies of her Elm Creek novels in print, Ms. Chiaverini’s devoted audience is unlikely to be disappointed by this newest addition.

The Civil War was a time of great passion, of love and sacrifice, of incredible heroism and a belief that mankind could be better; womankind, such as those in The Union Quilters had a strong hand in making that happen.

Sharon Hunt is a freelance writer and book reviewer whose work has appeared in various publications such as the The Globe and Mail and Halifax Chronicle-Herald newspapers.