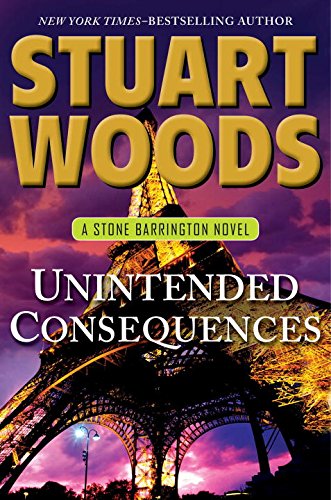 Should you be in the mood for a light but intelligent read, try Stuart Woods’ Stone Barrington novels.

Now up to 26 volumes in the series, they remain consistently entertaining without being vapid, and always take the reader someplace they’ve never been before while holding true to character and style.

The latest, Unintended Consequences, opens in France then returns Stone to his normal turf, New York City. In both places he’s more at sea than usual, for somebody slipped him a mickey on the plane, and he lost four days from his life. He is determined to fill in those blanks before the missing information kills him.

Originally an underpaid NYPD cop with a knack for getting into trouble, Stone has risen in his fortunes to be a very wealthy lawyer hobnobbing with very wealthy and powerful people—including top-secret government agencies.

The agency he consults to is responsible for him being the “unintended consequence” of title: He happened to be the wrong seat at the wrong time when the agency tried to take down a villain. Stone ends up working with them toward the same end, with a few side trips and red herrings along the way.

It may be that Stone has gone up in the world because he’s always and forever an honest gentleman. This makes him him trustworthy and likable, for readers as well as characters. What stretches credulity is that everyone Stone deals with is similarly endowed.

Dialogue among characters is astonishingly direct and articulate (and almost identical in tone and vocabulary—they may as well have graduated from the same exclusive school). They make complex, sometimes world-affecting deals in minutes, conducted in utmost courtesy. And once allied, they have the resources they need to solve major crimes at the snap of fingers.

It’s all very fantastic, though believable in the context of each novel. Mr. Woods is a careful plotter so he keeps all bases covered. Despite clear and present dangers to selves and country, Stone and his compatriots are well equipped to bypass bureaucracy and come out on top.

On top is one of the many positions he enjoys in his sex life, as well. Talk about fantasy! Stone hits the sheets with just about every beautiful woman who comes on stage, with nothing resembling courtship save for his gentle integrity.

Female readers may feel that this book and all the others are sexist, but if they look closely they’ll see that each female character is empowered as much as or more than in contemporary women’s fiction. Mr. Woods’s gals are extremely intelligent; occupy high-level positions; are savvy in business and relationships; and in complete control of their bodies.

It just so happens that in every Stone Barrington novel they are gorgeous and willing, too. In Unintended Consequences, they’re also connected with international agencies and crucial to taking out the bad guys. Without his women, Stone would probably struggle to get the job done.

Mr. Woods is a master of the no-superfluous-words style of writing. Most of the story is conveyed through dialogue, which is why it rips along so fast and the wheelings and dealings are so crisp.

Setting and emotion are sketched or implied, and sexual capers are conducted discreetly off stage after tantalizing lead-ins. They never interfere with the story; rather, Stone’s liaisons are always with key players and simultaneously portray his character.

Another constant through the series is at least one scene where Stone goes somewhere in his own airplane. Mr. Woods is a pilot himself and shares his love for flight with the reader. Instead of glossing over the travel portions of the adventure, as many novelists do, he adds interest by giving a snapshot of the direct flying experience. The fact that it adds some glamour doesn’t hurt.

Unintended Consequences and its predecessors, therefore, are reliably fun and intriguing. Through lean prose and uncomplicated storylines, these books engage a broad spectrum of readers. And since Mr. Woods cranks out at least two a year, we can look forward to more of the same.