Undocumented: Immigration and the Militarization of the United States-Mexico Border 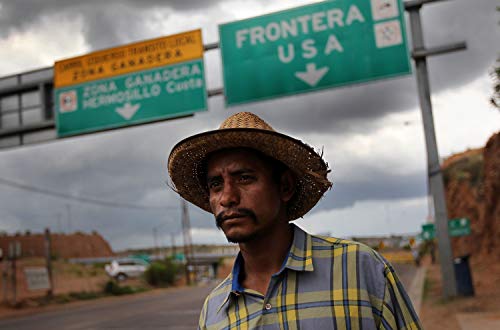 “an empathetic, timely, and thought-provoking collection of memorable photographs documenting the entire experience of illegal immigration across our southern border from beginning to end.”

A young woman on crutches, one empty pant leg pinned up, confronts the camera with desperate determination in a migrant shelter on her journey through Mexico. But will she be able to survive the dangerous trek across the border to the United States? Would-be illegal immigrants sprawl on the roof of a freight train known as “the Beast” (la Bestia) heading north from Chiapas, Mexico hoping that they will not fall to their deaths or maiming, or be robbed, raped, or kidnapped by gangs who prey on the vulnerable.

Empty plastic water bottles line a brush path used by immigrants walking into Texas’ Rio Grande Valley. If the blistering heat doesn’t get them, most likely the treacherous river or ubiquitous Border Patrol will! A heavily armed civilian paramilitary volunteer patrols the Arizona border. He prefers not to be called a vigilante. A young Honduran boy is transfixed by a movie playing on a suspended screen in a chain link cage detention facility in McAllen, Texas.

These haunting and often harrowing images were captured by award-winning photojournalist John Moore, a special correspondent for Getty Images, who has taken photographs throughout the world but focused on undocumented immigration to the United States for the past decade. He has covered the entire length of the U.S. southern border, traveled extensively throughout Mexico and Central America, and is intimately familiar with both the inhospitable terrain and those who frequent it.

Undocumented: Immigration and the Militarization of the United States-Mexican Border Moore records the grueling illegal migration experience of Mexicans and Central Americans attempting to escape the grinding poverty and vicious gang and cartel violence of their homelands. He accompanies them on their perilous journey north and is with those who make it to the border where they may wade the river or climb a fence or pay a guide to lead them through the desert. And he is with them when they are detained by Customs and Border Protection (CBP) Agents and deported, often determined to make the attempt again.

As such, Undocumented is Moore’s personal visual memoir of a contemporary enactment of an age-old human diaspora drama. But it is not a one-sided perspective, even though his sympathies clearly lie with the migrants. Moore’s work is set apart from other photographers in the burgeoning borderlands photographic genre, which often verges on victimography, not only by his unparalleled access to immigrants, but also to the U.S. agents charged with deterring them.

Moore accompanies federal agents on ride-alongs, fly-alongs, and foot patrols while performing their routine surveillance, apprehension, and lesser-known humanitarian duties such as providing first aid and picking up human remains.

He documents high-tech surveillance systems. He is allowed inside migrant detention facilities, observes recruit training, and takes head shots of trainees at a U.S. Border Patrol Academy boot camp, where he depicts the transformation of out-of-shape recruits into highly trained grunts in the war on illegal immigration. “From training to technology, the U.S. border has become America’s militarized zone on the home front.”

The photographs are organized into six short sections covering the whole phenomenon of Mexican and Central American illegal immigration from its roots in the migrants’ homelands through an epilogue highlighting the triumphant American naturalization ceremonies of a fortunate few.

The first section contains a graphic portrayal of why undocumented immigration happens. Endemic poverty and increasing gang violence fuel emigration from both Central America and Mexico.

One photograph shows the heavily attended funeral procession accompanying the caskets of two young Guatemalan boys kidnapped on their way to school. “A ransom was demanded, and when the families could not pay, the boys were murdered, stuffed into plastic bags, and tossed along a path.”

In neighboring Honduras, San Pedro Sula has been called “the murder capital of the world” as rival gangs control the majority of the country, at least at the street level. Two of the best known—Mara Salvatrucha (MS-13) and Barrio 18—control drug trafficking and extortion respectively, both having their origins in immigrant communities of Los Angeles. In San Pedro Sula, Moore photographs masked hit men in a safe house. They look like desperate youths with few options for survival, not the “animals” referred to by President Trump in one of his recent anti-immigration tirades.

The second section covers the long journey north and the hazardous border crossing. Here Moore participates in the ultimate extreme ride-along, climbing onto the roof of a moving freight train to join hundreds of migrants clinging to their precarious perch.

“When I climb down at the next stop, I am parched, exhausted, uneasy on my feet. I had ridden The Beast for only three hours. The migrants ride for weeks on their journey ‘al norte.’”

Many migrants never survive the arduous journey. Moore photographs personal effects at a Medical Examiner’s office in Tucson, Arizona, used to attempt to identify remains and reunite the deceased with loved ones. A belt buckle, a crucifix, a wedding ring, travel toiletries, dollar bills, a photograph of a young couple—poignant mementos of lives cut short by a desperate dream.

The next part traces the border from east to west, from the Gulf of Mexico over 1000 miles along the Rio Grande, then almost 1000 miles more of electronic or physical fence ending as an ugly groin dipping into the Pacific Ocean. The construction of a tangible wall from sea to sea as promised by President Trump would be an engineering nightmare incurring incalculable ecological, cultural, and social as well as economic costs.

The fourth part depicts the militarization of the frontier via myriad federal agencies under the umbrella of U.S. Customs and Border Protection (CBP). Photographs here highlight the vast majority of apprehensions made at night, when smugglers prefer to attempt the crossing. These photos suggest a strong sporting element in the hunting of undocumented immigrants, with agents preferring “good aliens” who put up a spirited chase before being caught like deer in federal truck and helicopter floodlights.

The last section deals with illegal immigrant life in a divided America where increasingly popular anti-immigration rhetoric is being mobilized to protectionist political and economic ends.

“When he later won, the world was surprised. But for many of the 11 million undocumented migrants living in the United States, the results were more terrifying than surprising. The anti-immigrant fervor had been brewing for much of the previous decade. They had seen this coming.”

Photographs here include a devastated “dreamer” hearing the news that Trump intends to end Deferred Action for Childhood Arrivals (DACA). Other show migrant workers from Mexico performing the back-breaking agricultural stoop work in our fields that American citizens refuse to do as migrant labor continues to be an essential component of American farming as well as the construction and service industries.

The unfortunate consequence of this is that many long-term illegal immigrants grow deeply rooted here with productive family lives—de facto Americans but not de jure--living an American nightmare more than the American dream because of the constant fear of deportation and family separation.

In sum, Undocumented: Immigration and the Militarization of the United States-Mexican Border is an empathetic, timely, and thought-provoking collection of memorable photographs documenting the entire experience of illegal immigration across our southern border from beginning to end. And, for the vast majority, the end of the story is not a happy one, neither is their sojourn here, marred by escalating anti-immigration sentiment.

The photographs are captioned in both English and Spanish. And each of the book’s sections has an introductory summary mini-essay in both languages. This device effectively underscores that all borders are porous, no matter what physical barriers are constructed. As then Arizona Governor Janet Napolitano observed in 2005: “Show me a 50-foot wall, and I’ll show you a 51-foot ladder.”

Perhaps even more to the point is the reminder by former Florida Governor  Jeb Bush that many illegal immigrants who come to the United States to provide for their families are not committing a felony but an “act of love.” The hauntingly beautiful and frightening photographs in this collection admonish us on every page that this kind of compassion is what should distinguish us from President Trump’s “animals” and that there should be no winners and losers in the human race.