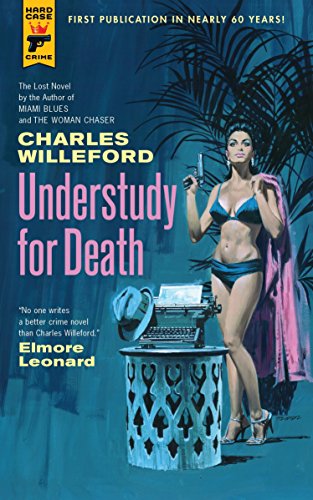 “fans of Willeford in particular will be pleased that Hard Case Crime has put their man back on the book rack once again.”

A woman in the city of Lake Springs, Florida, murders her two small children and commits suicide. Covering the story for the Morning News, reporter Richard Hudson resists his managing editor’s insistence that the woman’s motives are not properly understood. Once he’s forced into a follow-up assignment on the case, however, Hudson ends up learning more about his own life and marriage than he expected.

Newsstand ran into trouble in 1960 when the U.S. Postal Service refused to deliver 18 of their titles. One of Willeford’s fellow authors on their list, Elaine Williams (writing as Sloane Britain), committed suicide after disapproval of her lesbian novels became an amplification of the censure she increasingly faced in her personal life.

The novel’s importance, though, lies in the opportunity to study Willeford’s early development as a writer. Since Understudy and his other early titles are long-since out of print, and copies of the original paperback editions sell online for anywhere from $200 to $600, Hard Case Crime has once again provided an invaluable service to crime fiction lovers by putting an affordable copy of Understudy into our hands for consideration.

Willeford’s fame, of course, was cemented by his hard-boiled Miami-based crime novels, primarily Miami Blues (1984) and the three other Hoke Moseley novels that followed it. While Understudy surely must be read as domestic suspense rather than hard-boiled crime fiction, it shows an early attempt to develop an understated, rather hard-edged male protagonist.

At the same time, it sparkles with the occasional humor and calculated irony that became a hallmark of his more famous work. When an old man is led over to Hudson’s desk in the newsroom, he “sat down on the first fourth of the chair beside my desk.” Describing the body of water for which the city is named, our narrator remarks that “Lake Springs had a white, sandy bottom: the water was clear enough to spot a lost wristwatch at three fathoms.”

Understudy for Death reads very quickly, as did most pulp novels of the period. While the roughness of some of the sex scenes are questionable for today’s readership and the tendency toward domestic suspense rather than crime investigation may disappoint some, aficionados will celebrate its publication as an important, accessible addition to their crime fiction library, and fans of Willeford in particular will be pleased that Hard Case Crime has put their man back on the book rack once again.