Underminers: A Guide to Subverting The Machine 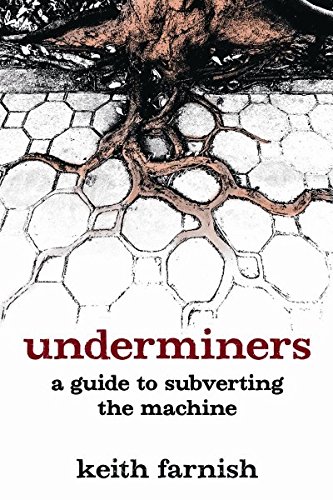 “In all actions, consequences must be anticipated and personal responsibility taken.”

“We are the underminers. And this is our time.”

Not sure why it’s time for underminers? Keith Farnish will explain and convincingly. “To undermine something is to weaken its very foundation in order to bring about its eventual collapse,” he notes. The target is the industrial growth civilization, the modern global juggernaut that swallows everything it touches. As Mr. Farnish says, “What makes us human is we do things that go beyond the simple need to survive. What makes us civilized is not knowing when to stop.”

Which is where undermining comes in. Mr. Farnish ranges broadly through the problems industrial civilization has caused, but suggests that the best way to pull the plug on the system is to recognize, expose, and gain distance from the belief systems that perpetuate it.

The initial part of the book highlights what he calls “The Tools That Disconnect,” meaning they sever us from each other, from working together to achieve a more habitable and equitable system, and from the natural world on which we all depend. These 15 tools include “Lie to us; Praise us for being good consumers; Sell us a dream; Give us selected freedom; Scare us . . .”

It’s not only governments and multinational corporations who use these tools. Thanks to our school systems and mass media, we’re constantly getting hammered, and Mr. Farnish explains the consequences.

Mainstream environmental groups and NGOs are guilty, too, Mr. Farnish says for “partnering” with corporations using the disconnection tool “Make us feel good for doing trivial things,” and failing to call out the impossibility of maintaining an industrial growth system on a finite planet. Symbolic actions such as getting arrested, small actions such as changing light bulbs, are “like putting a Band-Aid on an amputation stump.”

An Englishman who lives with his family in the Scottish borderlands, Mr. Farnish has worked with groups such as Greenpeace and Conservation International and didn’t like what he saw.

On the other hand he has worked with Anonymous and other decentralized groups, whose techniques he considers more effective. (Evidence in the book points to his being a geek, and his description of how Anonymous works is fascinating. Some of the other tech undermining scenarios can make non-geeks’ eyes glaze over.)

One of the book’s most valuable points is the imbalance and destruction inherent in civilization—any urban-based hierarchy system—and how that differs from culture. He also distinguishes between “legal” and “lawful”—the latter derived from Common Law.

So how does one undermine? Although Mr. Farnish describes actions he and others have taken, liability prevents him from going into great detail, leaving this section somewhat vague but prolix.

He does instruct that violence isn’t part of undermining—“Concentrate on the Tools of Disconnection; the system doesn’t recognize those actions as a threat.” He describes simple actions such as remotely turning off a bank of TVs in a big box showroom, more involved ones such as sending out fake press releases in which a corporation apologies for its plunder, and suggests for the tech-sophisticated reader complicated efforts such as swamping corporate computer systems. In all actions, consequences must be anticipated and personal responsibility taken.

A primary reason people don’t admit the harm of this civilization is that they can’t imagine other options. Mr. Farnish suggests how communities can decentralize and handle social needs. (Good luck developing a “community” in a high-rise apartment building—and that’s one of the problems.)

The author admits, “In 2007 I became one of the lucky ones and walked out of the machine. Most of us can’t do this yet.” It would have helped the cause to explain how he managed it so that others might gather how to take the leap. While this book isn’t always a compelling read (at least to someone already versed in these issues) its insights are valuable enough to merit the time to read it.