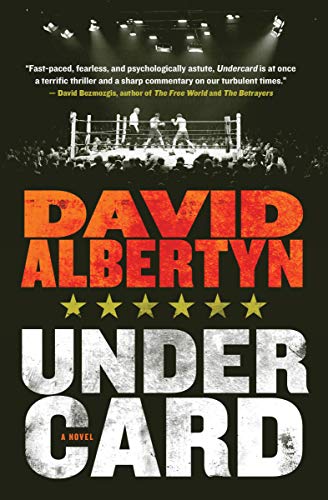 “Undercard is a good crime novel and a solid debut for David Albertyn.”

When Tyron Shaw returns to his hometown of Las Vegas after being discharged from the United States Marine Corps, he expects to reconnect with the small circle of friends with whom he grew up.

What he doesn’t expect is to find that one of them, police officer Keenan Quinn, was driven from the LVPD after the fatal shooting of an unarmed teenager and will be the subject of a protest march. Another, Antoine Deco, is now an ex-convict about to take a giant step forward in his career as a fighter on the undercard of a major boxing event. And Keenan’s wife, Naomi, for whom Tyron still has feelings, wants to end her marriage and is sending signals that she might be interested in rekindling the flames with Tyron.

The quartet grew up in an atmosphere of violence and fear in which Tyron’s parents and Antoine’s father were murdered and the cases never solved. In the next 24 hours, however, the past will explode into a fresh round of killings that threatens to pull them down into the undertow of corrupt casino owners, crooked cops, and social unrest.

Undercard is the debut novel of David Albertyn. An interesting character in his own right, Albertyn was born in South Africa, where his father was involved in the anti-apartheid movement. When he was eight, their next-door neighbor was stabbed to death, causing Albertyn’s family to immigrate to Canada.

A graduate of Queen’s University in Kingston, where he majored in Film Studies, Albertyn soon transitioned to creative writing. He’s also an active athlete, competing in track and tennis. His daytime job, the one that has been paying the bills up to now, is as a professional tennis coach.

The good news is that he successfully generates a gritty, dark atmosphere in the novel that draws on the best elements of noir to keep readers edgy and absorbed. His interiors are dark and gloomy, and his exteriors make us feel agoraphobic and threatened in a vague, undefined way.

It should also be noted in passing that the book itself is a very attractive product, both with respect to the cover design and the interior book design. House of Anansi should be very pleased with the look and feel of this title.

Also good are Albertyn’s characters. Coming from difficult backgrounds, each one in the circle of four experienced enormous challenges that have followed them into this 24-hour maelstrom. Keenan, the disgraced cop, takes the lead for Albertyn’s narrator in the investigation of the past killings, and his weakness plays effectively in counterpoint to his stubborn pursuit of the truth. Antoine is spooky, and Naomi, a former WNBA professional basketball player who’s now coaching kids, could perhaps be the most interesting of them all.

The bad news, unfortunately, is that Albertyn divides his narrative into four points of view that end up diffusing the strength of his story at times when he should be building toward each crescendo within his plot.

Tyron seems to be the primary character, but he’s completely unimportant to the investigation of the murders—a surprise, given that his parents were two of the victims. Furthermore, his flashbacks to a firefight on the outskirts of Baghdad, while intended to flesh out his character, are intrusive non sequiturs that interrupt the flow of the action and should have been left on the cutting room floor.

Antoine, by far the darkest of the quartet, disappears after his fight and a brutal knifing to lurk offstage as a threat until the end, when he re-emerges for a final act of violence. He needed to be worked into the plot as a whole more effectively. At any rate, it appears as though Albertyn is setting him up to be the central character moving forward, a very good idea if the author wishes to continue in the noir groove he’s working so assiduously in this novel.

Naomi, unfortunately, is sadly underutilized, and the cutaways to her point of view don’t really contribute much of significance to the suspense of the story. She functions mostly as an estranged wife, a love interest, and a babysitter for her in-laws, which is a waste of the potential we see at the beginning when she interacts with her teenaged players. In her WNBA career she was only a bench player; the same could be said for her in this story.

Nevertheless, Undercard is a good crime novel and a solid debut for David Albertyn. Once he smoothes out the inconsistencies and finds his voice, we should be able to expect even better things from him in the future.