Under a Silent Moon: A Novel 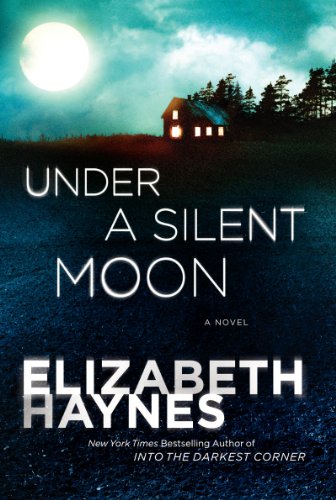 “The fact that Ms. Haynes already has three suspense novels under her belt shows in her solid, clear, and, yes, suspenseful writing. . . . Overall, a strong opening to what promises to be a strong series.”

If so, this one will fit the bill. With a double murder and near murders all driven by sex addiction, and the main character getting into a straightforward affair on the job, there’s hardly a page where something isn’t suggestive or shocking.

In counterbalance, the presentation of this contemporary British police procedural is systematic. The author, formerly a police intelligence analyst, brings verisimilitude to the story by inserting reports and communications like those used by real coppers.

As she notes, the “book is intended to simulate an authentic murder investigation”—a good technique for conveying information without bogging down dialogue or narrative. For readers interested in the technique, she appends charts illustrating the pattern analysis used to sort through leads and evidence, along with explanatory material.

Under a Silent Moon introduces a new series featuring Detective Chief Inspector Louisa Smith. The two murders in a rural village—one obvious, the other disguised as a suicide—at first appear unrelated. But they prove to be deeply intertwined, in a complicated case that forces Louisa out on a limb just one month after her promotion.

Louisa’s voice is not the only one telling the story. The novel head-hops between cops and suspects and witnesses, building suspense as well as the case but leaving the reader confused on occasion. In the opening, too many characters are tossed in too fast, in scenes too short to get to know them. Eventually, though, enough vignettes build up to draw the picture.

The procedural format really helps with this. It identifies time/date/place and other information at each viewpoint change, while counting down tense days. It comes as a surprise that all is resolved within a week, given how much is going on and how many people are involved in this densely packed story.

Despite its salacious over- and undertones, Under a Silent Moon is not a moralistic tale. In the same way that each character is believable in their range of strengths and weaknesses, the steamy elements reflect the myriad ways that sex can enhance or destroy people’s lives.

The fact that Ms. Haynes already has three suspense novels under her belt shows in her solid, clear, and, yes, suspenseful writing. At intervals, one-line descriptions sing out—“a voice that would freeze vodka;” “burned raw with the acid of jealousy”—adding zest to the otherwise dark climate of the novel.

Overall, a strong opening to what promises to be a strong series.