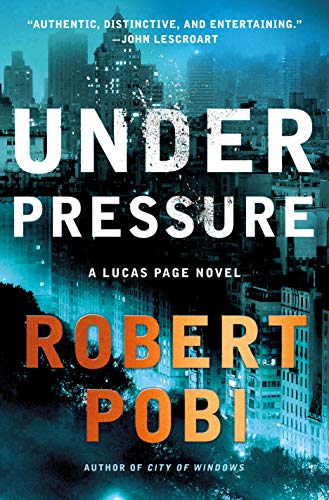 “Under Pressure is a thriller that’s fun, entertaining, and challenging.”

Dr. Lucas Page, an astrophysicist and mathematician, is a former FBI investigator with a special gift. Acute spatial awareness and an intuitive understanding of geometry allow him to convert his surroundings into numerical values. At a crime scene, he has the ability to convert distances and sizes and relationships into patterns of measurement that explain what happened or identify discrepancies where there should be none.

When someone sets off a bomb in New York’s Guggenheim Museum, killing more than 700 people, FBI Special Agent in Charge Brett Kehoe convinces Page to come out of retirement to apply his unique abilities to an especially difficult problem.

With this many victims and a modus operandi that’s highly unusual, Kehoe’s team is swamped with the myriad possibilities presenting themselves. They need Page to cut through the chaff and find the thread that will lead them to the bomber.

But as the explosions begin to multiply, eliminating suspects one by one in spectacular fashion, Page begins to feel an acute sense of pressure to solve the mystery of the bomber’s identity and put a stop to this ongoing terror squeezing New York before more people lose their lives.

Under Pressure is the second Lucas Page novel by Robert Pobi, following up on his highly successful series debut City of Windows (2019). Pobi, who divides his time between Montreal, northern California, and Florida, has published three other novels: Bloodman (2012; previously published as Eye of the Storm); American Woman (2014; previously published as Harvest), and Mannheim Rex (2012).

Lucas Page is the star of the show here, and he’s the reason you’ll want to read both books in this series. A grouchy curmudgeon, his first stint with the FBI a decade ago ended when he was caught in an explosion—dubbed The Event—that left him missing an arm, a leg, and an eye.

Pobi does an excellent job of reminding us as the story progresses what it must be like to live with multiple prosthetics, let alone explore crime scenes with such physical complications, but he coyly withholds the full back story that would provide specific details about The Event. Apparently Kehoe was intimately involved. Beyond this, mum’s the word.

The other piece of Page’s back story concerns his adoption as a child by the wealthy Mrs. Page who, assisted by her general factotum Mr. Teach, provides him with every opportunity to develop his nascent abilities and explore his love of astronomy and numbers. However, it will be necessary to read City of Windows first to pick up this layer of the Lucas Page story in meaningful detail.

Beyond this glitch, there’s no doubt that this series will appeal to readers who enjoy the Orphan X thrillers by Gregg Hurwitz, the Lincoln Rhyme series by Jeffrey Deaver, or the various modernized Sherlock Holmes television series, particularly Elementary, set in New York and starring Jonny Lee Miller and Lucy Liu. There are many echoes here that readers will enjoy.

Pobi’s storytelling abilities come close to those of Hurwitz and Deaver, and Page is a rough-edged know-it-all reminiscent of Rhyme (a quadriplegic) and the contemporary Sherlocks. The chapters are very short—there are 106 of them altogether in Under Pressure—and Pobi takes full advantage of this growing trend in popular fiction to keep the pages moving under our fingers.

The secondary characters are also very good. FBI agent Alice Whitaker is a great partner, slightly reminiscent of Deaver’s Amelia Sachs, and Page’s family—wife Erin and the “Maude squad,” their troop of adopted children—are charming. Writing about children, it would seem, is a strength that runs through Pobi’s entire canon.

The drawback to this novel, however, lies in its writing style. While City of Windows was an exceptionally written thriller in almost every respect, Pobi seems to have felt under pressure, pun intended, to outdo himself this time out. We sense an unrelenting pressure to crank out snappier prose, pressure to zing the reader with an endless stream of clever similes, and pressure to bombard us with insider allusions and product esoterica. Pressure, pressure, pressure.

Characters don’t just sit down on a chair, for example. They drop into a Corbusier chair or a Herman Miller Aeron chair or a Wassily chair. Really, the vast majority of readers won’t be conjuring up highly specific images of designer creations here from their vast knowledge of expensive furniture. A chair’s a chair, for crying out loud. Get your character into a seated position without being too off-putting, thank you, and move the story along.

Granted, this is a convention in many thrillers, something we see Gregg Hurwitz indulge in to a certain extent, for example, with specific high-end brands of vodka and refrigerators and whatnot, but Pobi’s drive to impress with his eclectic awareness of hipness is almost overwhelming in this novel, much more so than in City of Windows. Hopefully in the next one he’ll dial down the pounds-per-square-inch and take the pressure off both us and himself.