Under Jerusalem: The Buried History of the World's Most Contested City 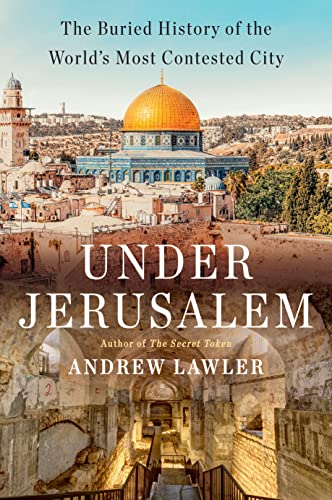 “A comprehensive, even-handed, clear-headed story about one of the most argued over pieces of land on earth.”

Andrew Lawler has tackled big subjects before—the lost colony of Roanoke most recently. But he takes on a particularly complicated one in Under Jerusalem. Fortunately, he’s up to the task, delivering a story of not one excavation but several, not one culture or historical event but many. Just as Jerusalem is itself layered, so is this book:

“Like the marine organisms that created the limestone, succeeding generations created new strata. But Jerusalem is not like the abandoned towns, such as nearby ancient Jericho, dotting the Middle East that left behind high mounds resembling layer cakes, with the old neatly stacked beneath the more recent. Constant human activities jumbled the past; a Roman column might be repurposed for a Byzantine church, and stones cut by Jewish masons two thousand years ago could adorn a medieval mosque. Jerusalem is an old puzzle that reassembles itself in fresh ways, like the faiths that grew from it.”

What’s exceptional about this book, besides delivering fascinating characters and vivid excavation stories, is the way Lawler is acutely aware of the effect the past has on the present. The cultural, religious, and political tug-of-war between Judaism, Christianity, and Islam informs how he describes events. He is careful to show the motivations behind the different powers (from the Ottoman Turks to the French to the British), each with their own reasons to want to claim the holy city. He is equally careful to make clear the claims each religion has on the city, stressing the long-ago peaceful coexistence between Jews and Muslim Arabs, a balance that was changed by the influx of European or Ashkenazi Jews fleeing pogroms and the Holocaust in the late 19th and mid 20th century.

Though the book isn’t one story but several, each excavation serves to illuminate some aspect of archeology, history, or essential character of the city. The scope, however, is broad, allowing the reader to understand the different motivations behind the archeology. Science and historical understanding were rarely in the forefront. Treasure hunting and building reputations took a more prominent role. And politics was never far behind:

“The British empire in the early 1890s was nearing its global zenith, covering a quarter of the globe and dominating a quarter of the world’s population. The threat posed by Russia had faded as Czar Alexander III sought to avoid major international conflicts while grappling with growing domestic challenges. Britain’s purchase of the Suez Canal, meanwhile, had undermined French influence in the Middle East. Egypt was now out of the Ottoman orbit and under British sway.”

This kind of broad view and depth of knowledge undergirds every chapter in the book. Lawler has clearly done his research, and he pulls together all the elements into a fascinating story that presents the city of Jerusalem in all of its facets, much like a kaleidoscope offering us many different views of the same object. It’s hard to imagine a definitive book being written about such a complicated subject, but this one is as close as it gets. Lawler gives a comprehensive, even-handed, clear-headed story about one of the most argued over pieces of land on the earth. But this is no dry treatise. It’s more of an adventure story with the main characters being archeologists and treasure seekers. Lovers of Indiana Jones and the Raiders of the Lost Ark won’t be disappointed.