Under the Cold Bright Lights 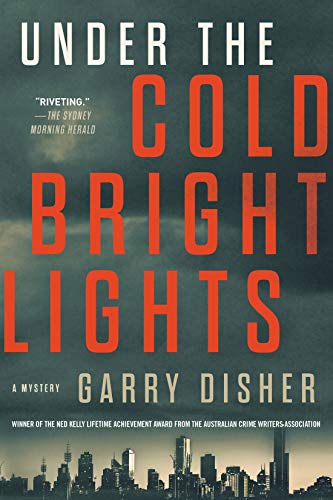 “Under the Cold Bright Lights is well written. It reads quickly and holds our attention throughout. Disher’s characters, as always, pop from the page. . . . don’t you dare miss it.”

Acting Sergeant Alan Auhl is back on the force after five years of retirement, working in the Cold Case unit with a young partner who threatens to pepper spray him if he comes too close to her and enduring epithets such as “the Retread” and “Old Man Time” from his youthful colleagues.

Resuming an old case in which two sisters phone him once a year to talk about the unexplained death of their father on his farm east of Melbourne, Auhl is pulled into another cold case when a body is discovered beneath a concrete slab on a rural property near Pearcedale.

Dubbed Slab Man, the victim was shot and buried in an unmarked grave that was hidden under poured cement, and when Auhl and his partner discover that the original house on the property was apparently torn down and hauled away, potentially destroying evidence related to the murder, the mystery deepens.

Under the Cold Bright Lights is a new standalone novel from Australian author Garry Disher, who has published over 50 books in a range of genres. Fans of his crime fiction know him for his Hal Challis and Wyatt series, and his recent Challis and Destry novel Signal Loss (2016) was an excellent example of his capabilities in the genre.

Cold Bright Lights begins as a typical police procedural, following Auhl and his partner Claire Pascal as they work their cold cases, and Disher does a decent job of keeping the various threads separate to avoid confusion among the investigations.

What’s atypical about the novel, however, is Alan Auhl himself. Separated from his wife, who nonetheless shows up occasionally to stay in a spare room overnight when business calls her to Carlton, Auhl has turned his home into an ad hoc boarding house and temporary shelter for people with hard-luck stories he can’t resist.

Front and center in this regard are Mrs. Neve Fanning and her young daughter Pia. They’ve fled their home to escape Neve’s abusive husband, and Disher develops this storyline into a primary subplot of the novel. As Auhl attempts to help them through each crisis, while offering another spare room to his partner Pascal when her marriage suddenly caves in, he begins to grow on us as a likeable protagonist.

However, Disher eventually takes Auhl in a very different and surprising direction. The author’s decision to introduce a dark side to his central character casts a shadow over Auhl that colors the balance of the story and requires an attitude adjustment from us. Just when we thought we had an accurate reading of his personality, this other thing crops up, and suddenly we’re not so sure.

As a result, Under the Cold Bright Lights is something of a problem novel. Readers expecting another stolid and heroic detective are forewarned that Disher has a somewhat different objective in mind. Fraught with moral ambiguity, the story forces us to decide whether we’re on Auhl’s side at the end or not. It’s a challenge.

Under the Cold Bright Lights is well written. It reads quickly and holds our attention throughout. Disher’s characters, as always, pop from the page.

The bottom line? It’s a Disher crime novel, so don’t you dare miss it.