Under the Bus: How Working Women Are Being Run Over 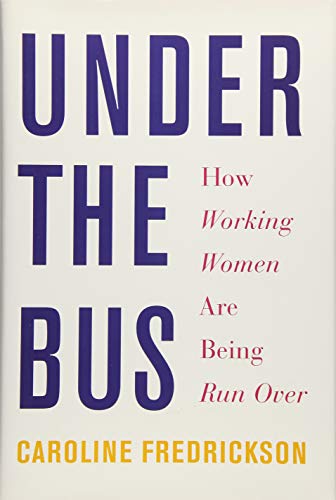 “a difficult read because it is so disheartening.”

Minimum wage issues are an important topic of the day. Caroline Fredrickson’s new book addresses the ongoing wage challenges that women experience in the workplace.

The important thing to remember is that for women, calculating a livable wage is only part of the battle. Most of the labor laws that have been enacted over the past 70 years have excluded segments of the workforce. It is, perhaps, not surprising that most of those segments are comprised of female workers.

Following the Great Depression in the 1930s, the National Recovery Administration deliberately placed women’s wages lower than men’s and often for the same job. The NRA established codes that allowed jobs filled primarily by men to a higher wage than jobs that women performed. This occurred even though there were no additional skills, training or experience required.

Even though job segregation is no longer required by statute, this inequality of wages continues to exist today.

During the Great Depression, women were fired from jobs because it was believed they were taking jobs from men. That errant thinking also continues today. Too many people, who know better, believe that women work for “pin money” and ignore the fact that women are the primary breadwinners in many families.

Ironically, this same argument has not been made when considering African American women working as housekeepers and nannies—after all, men do not want those jobs. A further irony existed when families with black help fired those women because the economy made it cost effective to hire “higher-status white servants.”

“Although newspaper reporters and commentators characterized working women as silly and shallow, the sad reality was that many women desperately needed a job to keep their families from falling off the cliff.”

Congress passed the 1932 Federal Economy Act that required one spouse to resign if both were working for the federal government. Guess which spouse was forced out? The Women’s Bureau’s analysis found that 75% of those resigning because of this law were women.

Fredrickson is excellent in describing how Congress perpetuated discrimination because of its members’ pervasive attitude on race, women, and work. Most members of Congress believed that “women’s work” like housekeeping and caregiving reflected women’s natural role. This justified legislation that gave rights only to those involved in “real work.” And those jobs were almost exclusively filled by men.

Perhaps the most intriguing part of Under the Bus involves the discussion of federal labor legislation and how the laws were drafted to exclude swaths of U.S. workers. For example, the 1935 National Labor Relations Act disqualified any worker “employed as an agricultural laborer, or in the domestic service of any family or person at his home.” President Franklin D. Roosevelt caved into the demands of racist southern Democratic congressmen and threw agricultural and domestic works out.

Initially, the NLRA covered hospital workers. That changed with the passage of the Taft-Hartley Act in 1947. That law was designed to limit the unions. Congress, in its infinite wisdom, excluded hospital workers who were women, poor, and nonwhite. The original NLRA protected these workers. Racist members of Congress decided that could not last. The unions fought Taft-Hartley but, because they believed African American women were unlikely to join a union, failed to fight for their inclusion.

The Fair Labor Standards Act of 1938 established a set number of weekly work hours with overtime for excess hours. When the law was enacted, it covered only 20% of the workforce. It established a minimum wage of $.25 and a 44-hour workweek.

Southern Democrat members of Congress opposed the FLSA because a minimum wage and regulated work hours would disrupt the southern economy. That economy was based on low-wage African American workers.

Fredrickson includes a quote from Congressman James Mark Wilcox (D-FL), “There is another matter of great importance in the South, that is the problem of our Negro labor. There has always been a difference in the wage scale of white and colored labor. So long as Florida people are permitted to handle the matter, this delicate and perplexing problem can be adjusted; but the Federal Government knows no color line and of necessity it cannot make any distinction between the races. We may rest assured, therefore, that . . . it will prescribe the same wage for eh negro that it prescribes for the white man. . . . Those of use who know the true situation know that it just will not work in the South. You cannot put the Negro and the white man on the same basis and get away with it. Not only would such a situation result in grave social and racial conflicts but it would also result in throwing the Negro out of employment and making him a public charge. There just is not any sense in intensifying this racial problem in the South, and this bill cannot help but produce such a result.”

One wonders whether similar sentiments are at play in the current discussion of livable wages in the U.S.

An interesting undercurrent pervades Fredrickson’s book involving her work as counsel for a “Democratic leader.” She does not identify her former boss, but she uses that experience to reflect on her own shortcomings in drafting legislation that excluded U.S. workers.

She helped draft the Genetic Justice Act and the Paycheck Fairness Act. When drafting those laws Fredrickson did not challenge the assumption that small employers should be left out of the legal mandates. She writes, “. . . it is now so much clearer to me how many vulnerable workers are left out of the successful efforts to make the workplace more just. I imaging if I had tried to eliminate the size and other exclusions or even to reduce their impact, the lobbyists for business would have come out of the woodwork and the pushback would have been fierce. But, I didn’t even think to try--that’s what disappoints me the most.”

This is a timely and important book. Fredrickson’s admission of her own shortcomings in drafting protective legislation adds to the integrity of her work. The book is a difficult read because it is so disheartening. Women reading this book will wonder why Congress and presidents gave them such short shrift. Fredrickson raises many issues that continue to be negotiated, discussed, haggled over and discounted today.

Anyone interested in the U.S. labor movement, a living wage, or worker protections needs to read this book. Anyone who opposes protecting U.S. workers from discrimination and unfair labor practices needs to read this book. Fredrickson has presented a coherent look of the impact of past and present actions on real people. Perhaps this book will provide a blueprint to fix what has been wrong for so long. Workers are not the enemy of the U.S. economy or of business. Workers are, in fact, the reason the U.S. has an economy.