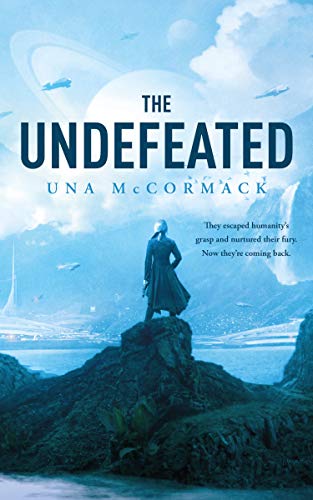 The entire plot of The Undefeated could be summarized as “Woman returns to her hometown and muses about her life.” Focusing on the plot, however, would do this subtle and mesmerizing novella a great injustice. Behind every leisurely description of “houses empty and tumbledown, silent and childless,” or “old people, in old buildings, clinging to old customs as their worlds decayed about them,” there is a mountain of secret horrors only faintly glimpsed. McCormack deftly tells a story of slavery and injustice precisely by not talking about it.

The main character, Monica Greatorex, is a member of a privileged class, born into money and the freedom that comes with it. She uses that freedom to travel to war-torn planets and write about poverty and struggle, and thus is more aware of her privilege than many of her class. Even so, she chooses not to look too closely at the most glaring injustice of her society: the enslavement of the jenjer.

Little is told about the jenjer. Since the book is told from Monica’s perspective, information about them is conveyed only glancingly, in casual asides or references to other things. Despite the fact that she is accompanied for the entire story by her jenjer slave, Gale, the details of the jenjers’ special abilities and the cost of those abilities is never stated outright. Although the mistreatment of the jenjer is the very foundation of the story, Monica avoids thinking about it, so it goes almost unmentioned.

The subtle way in which McCormack tells this story shines a spotlight on the problem of privilege. Monica spends her life writing about injustice and poverty, but she’s still a product of her upbringing. The wrong of her society runs so deep she can’t see it. She barely thinks about the plight of the jenjer because it’s so normal to her. By the time the consequences of their exploitation become too unavoidable to ignore, it’s too late.