Uncounted: The Crisis of Voter Suppression in America 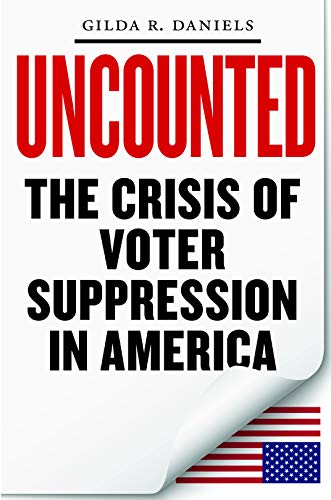 “Uncounted . . . explores methods that take away the right to vote, while we sleep . . . the right to vote is suffering debilitating blows in the courts and legislative houses across this nation.”

In a nutshell, that is why people need to read this book. There is a frontal assault on the right to vote and by extension the democratic experiment that has been the United States for almost 244 years.

Gilda Daniels presents a well-researched, sober discussion of the efforts by politicians, special interest groups, judges, and sundry other forces to undermine the right to vote in the United States.

This is a particularly timely book given the partisanship that runs rampant in society today. However, this is not an easy book. Be prepared to be ashamed, infuriated, exasperated, shocked, surprised, and hopeful. It is that kind of book.

No one talks to anyone anymore; everyone is screaming at each other. People view those with opposite opinions as the enemy. When a politician loses an election the claim is there must have been fraud—or chicanery of some sort. Even when there is a clear winner in an election the losing side rails against the process. This creates an atmosphere of distrust in the electoral process and lays the foundation for attacks on voting rights.

Daniels points out how the United States Supreme Court has succeeded in emasculating the Voting Rights Act of 1965, considered “one of the most important and effective pieces of congressional legislation in United States history.” This law prohibited practices that were once ubiquitous in many states such as poll taxes and literacy tests. The VRA’s goal was to “achieve full participation for all Americans in our democracy . . .” President Lyndon B. Johnson called the Voting Rights Act “a triumph for freedom as huge as any won on any battlefield . . .” It was specifically intended to obliterate voter discrimination.

As Daniels points out the dream of full voter participation that the Voting Rights Act intended to fulfill has itself been obliterated by federal courts and state legislatures. The country is enmeshed in efforts to prevent the “wrong kind of people” from voting and this usually means American citizens who are not white or speak English with an accent, or whose religion is unacceptable to the people intent on disenfranchisement.

The year 2020 celebrates the 100th anniversary of women’s suffrage. One hundred years ago women went to jail, where they were force-fed, for the criminal offense of trying to vote. Women around the world campaigned for the right to have a voice. And, they were not the only ones.

Following the Civil War, the 14th Amendment to the United States Constitution granted former slaves (the men, that is) the right to vote. And that right was viewed by many in the South as a threat to the hidebound practices inherent in those states. Southern politicians, most of whom were Democrats, engaged in a campaign to disenfranchise those men by any and all means necessary.

American citizens died fighting for the right to vote.

Think about that and think about what is happening now.

In Uncounted, the author discusses the poll tax at some length. At the 1890 Mississippi Constitutional Convention, the tax was described as “the most effective instrumentality of Negro disenfranchisement.”

Today, states are implementing voter ID laws because of a fallacious belief that voter fraud was rampant. That lie is promulgated those who are intent on limiting the right to vote to those who will vote the “right way.”

To many people, voter ID requirements are innocuous and common sense but when considered intelligently, the underlying objective becomes clear: they are designed to prevent people from voting. State identification is expensive, and the supporting documents are often impossible to obtain.

Most people do not realize that not everyone born in the United States has a birth certificate. In some states, people of color were denied access to hospitals and were born at home. The city, the county, and the state saw no reason to record those births. Imagine being a living, breathing person and told you do not exist because you do not have a birth certificate. It happens. Frequently.

This book offers readers the opportunity to familiarize themselves with past and present efforts to interfere with elections and the voting process. Gilda Daniels has provided a cogent, well-written roadmap through those efforts to restrict voting rights in the United States.

Daniels writes, “We have the power to ensure that the winds of change blow in the direction of progress and justice. These are critical times, but we are not sleeping. We press forward to our change. It is going to come.”

This is a book intended for all American citizens concerned about the future of the republic, regardless of political beliefs. Only through free and fair elections, with robust protections for the right to vote, will this unique experiment continue to flourish.

And don’t forget to vote.