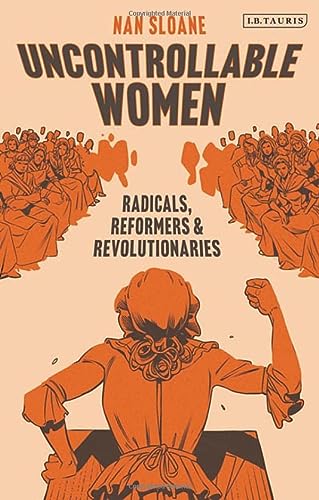 “Uncontrollable Women is a fine piece of history . . . It widens our lens to look beyond the men involved in a wide popular movement, allowing us to see more deeply into the lives of everyday people who mattered, many of whom, not surprisingly, were women.”

Nan Sloane presents a compelling history of radicals and reformers in Britain in the decades following the French Revolution. The English elite closely followed the way the poor and working class rose up in France, overturning a corrupt government with the promise of equality for all. The violence that ensued terrified the British ruling class and they were quick to pass laws to silence and control rabble-rousers.

Sloane’s history is powerful and clear, but the title is a bit misleading. She doesn’t write only, or even primarily, about women. Male revolutionaries feature more than women, in fact. In several cases, it’s the husband who influences the wife to take up his cause. None of which diminishes the importance of finding examples of women willing to fight for social justice and political causes. The book, however, would be better if the title weren’t so misleading. Those who pick it up looking for a series of portraits of revolutionary women will be disappointed. Instead a broader picture is developed, of angry working classes clamoring to have their voices heard only to be brutally repressed and silenced by the forces in power, some of whom were women.

Sloane lays out the purpose of the book in her introduction: “This is a book about radical, reformist and revolutionary women between the outbreak of the French Revolution in 1789 and the passing of the Great Reform Act in 1832. Very few of them are well known today; some were unknown even in their own day. All of them contributed something to the world we now inhabit. At a time when women were supposed to leave politics to men, they spoke, wrote, marched, organized, asked questions, challenged power structures, sometimes went to prison and even died.”

These are good enough reasons to tell the stories of the women she chooses, but the narrative is much more than the contributions of several women. It’s about the groundswell of demands for fairness, for basic human rights. This is a history few Americans know, how the British commons wanted the same rights they saw their American and French brethren enjoying and how Parliament reacted by passing a series of repressive measures. One act, for example, turned a free press into a criminal activity rather than a bedrock of democracy. Thomas Paine’s Rights of Man, the classic argument for human rights, was banned:

“Paine himself was charged with seditious treason but returned to France before he could be arrested. In December 1792 he was tried in London and convicted in absentia. His books went underground but remained seminal texts for reformers and radicals for decades to come. Mary’s [Wollstonecraft] Vindication of the Rights of Men was later eclipsed by the much better-known Rights of Women which in turn has become more a feminist text than a political one. Thus, although her place in feminist history is assured, and merited, her political contribution is obscured. This pattern, of women being required to be either feminist or political, but preferably not both, has been repeated many times during the ensuing centuries, and to some extent still influences expectations about female politicians.”

Sloane successfully shows that many political women were distinctly not feminists and that this doesn’t diminish their value as social and political thinkers. The women she brings to life on these pages are indeed mostly obscure, and Sloane has done a brilliant job of tracking down sources, from letters to the women’s own writing. She’s just as good at showing the harsh measures taken to control them and their male comrades in arms:

“Parliament passed the notorious Six Acts—generally known as the Gagging Acts—banning unauthorized political meetings, outlawing flags and insignia such as the Cap of Liberty [an important revolutionary symbol], giving powers to magistrates to search houses for arms, banning military drill and speeding up trials for political offences. Significantly, the Acts also tightened up the laws on unstamped newspapers and increased the penalties for publishing blasphemy and sedition; this was to have a direct and catastrophic impact on radical publications.”

Men and women together fought for freedom of the press and thought. If their arguments couldn’t be read in newspapers, they were heard in courts when they pled for their causes. Sloane quotes generously from several women who proved themselves as eloquent as men. Susannah Wright, a lace worker, was particularly memorable in her steadfast refusal to be cowed. One of those who saw her wrote:

“never will the impression be effaced from my memory; the firmness she evinced, and her resolution not to be silenced by the repeated interruption of the judge, and the unwarranted interference of the jury. . . .”

Uncontrollable Women is a fine piece of history, the kind left out of the usual mainstream narrative. It widens our lens to look beyond the men involved in a wide popular movement, allowing us to see more deeply into the lives of everyday people who mattered, many of whom, not surprisingly, were women.