The Uncollected Stories of Allan Gurganus 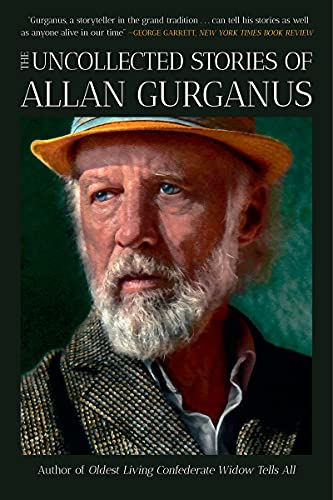 Allan Gurganus planted his flag on the literary landscape in 1989 with The Oldest Living Confederate Widow Tells All. That long debut novel has sold over four million copies; it was on the New York Times bestseller list for eight months, was made into a movie and then a TV and a Broadway show. It told the tale of Lucy Marsden, a 99 year old widow and survivor of the Civil War. Both original and traditional in its mode of telling, the book had wit and verve.

Those characteristics have stayed on display over what’s now a lengthy career. Gurganus has published some seven books since, including Plays Well with Others (1997), a previous collection of short stories, and The Practical Heart (2001), a set of four novellas. All of his subsequent fiction has been briefer than the first and showcase variety. Yet a writer’s work always resembles his or her own other work more than that of anyone else; we leave our fingerprints on every page. And these “uncollected stories” offer, happily, more of the same.

Gurganus makes his home in semi-rural North Carolina, and his accent and inflection belong to the Southern tradition. In his apprenticeship he studied with John Cheever, but there’s nothing clipped or reticent about his adult prose. We have, here, a yarn-spinner with a beguiling drawl, who seeks to entertain us, though his subjects are often macabre. In The Uncollected Stories, he covers a good deal of (mostly Southern) ground. Put Faulkner and O’Connor and a dash of Reynolds Price inside a cocktail mixer; add bitters, a dollop of sugar, shake and pour.

The stories range from “The Wish for a Good Young Country Doctor” to “My Heart Is a Snake Farm”; they have lengthy titles—“The Deluxe $19.95 Walking Tour of Historic Falls (NC)—Light Lunch Inclusive”—and brief as a single word: “Fetch.” Other titles, such as “The Mortician Confesses,” “A Fool for Christmas,” and “Fourteen Feet of Water in My House,” deploy various tonalities. Routinely these are monologues in which one character harangues another at length. Or the narrator begins and ends the story of his or her life without an interlocutor while we, as readers, respond. The mode is Southern gothic, and the humor and the horror fit together hand in glove.

First person is, in this collection, the dominant mode, and in eight first-person narratives the speaker shifts gender and age. In the opening story we hear from an elderly antiques dealer who unburdens herself to a young customer; in the second a shocked policeman arrests a local mortician who violates a corpse. In the third the speaker is the son of a troubled father; in the fourth a grown man remembers how he flew—lifted up by a tornado—as a child.

Sometimes one character speaks to a witness at uninterrupted length; more often the narration is first-person from the opening beat, and we reader-witnesses can overhear what’s told. This strategy is deployed throughout, with greater or lesser success—but always there’s a monologue in an inflected voice. The tale-teller’s tongue is lodged firmly in cheek; it sticks itself out at convention and is often forked. As a character in Dickens’s Our Mutual Friend (and, later, T. S. Eliot’s “The Wasteland”) claims, “He do the police in different voices.”

In only one narrative does Gurganus deploy the third person—and impersonal narration is not his strongest suit. In that story, “Fetch,” much of the action accounts the near-death of a Labrador Retriever who plunges after a stick into roiling northern waters and comes close to being drowned. A Golden Retriever is also rescued in “Fourteen Feet of Water in My House,” but there the narrator is Southern and the circumstance a flood. The second of these stories is the more persuasive, where we both listen and look; since “Fetch” is wholly descriptive, it feels a little forced.

At his best, however, Gurganus is first rate. He has great verbal agility; his stories are both glad and sad. The temptation is to quote at length, and to repeat bons mots. “We set off that Friday full of caffeine and an acquisitive sleekness that sometimes passed for sexy.” Or “Seated on-high, she flaunted her un-assets as a form of deficit flirting.” Or “She’d quit college to tend an ailing mother, who proved demanding, then immortal.” Or “She couldn’t forget the things he couldn’t remember.”

These are one-liners and scattered throughout. More often the discourse is purposively rambling and colloquial: in most cases, retrospective. The characteristic situation is that a speaker unburdens him-or herself for the first time after years of silence—either to a listener or on the private page. Gurganus’ ear is excellent, and his intonation perfectly pitched; a snobbish Southern lady reveals her racism, a devoted son his sorrow, a fat man his ability to act like Santa Claus, and so forth. Entertainment is at a premium here, and even when there’s excess—an aging virgin sucks the venom out of a snake-charmer’s back, a dowager collapses on a bench, still talking—we have been entertained. As the narrator of “A Fool for Christmas” declares, in the story’s last line, “Ain’t people wonderful!” And the punctuation—an exclamation, not a question mark—makes the author’s point.

“Who needs make-believe—given a world constructed so weirdly as ours? I now believe the girders of the mysterious are what really holds us all in place. Those provide limitless horror stories plus surging daily poetry.” These lines come from “Unassisted Human Flight,” but can stand as a summary statement for the whole of Uncollected Stories. There’s “surging daily poetry” and “the girders of the mysterious” throughout.

The last story of the collection is “Vacancy.” But these stories have no vacancy; they are chock-full and fine.