Unbound: Transgender Men and the Remaking of Identity 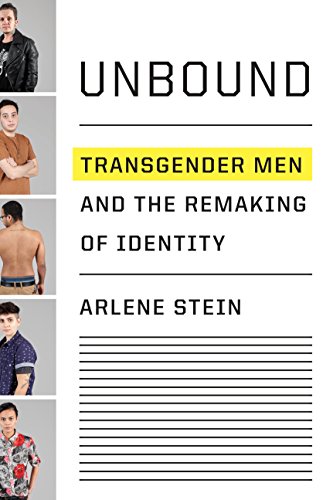 “This book is a catalyst for a thoughtful discussion of . . . complicated and challenging issues.”

“Societies define gendered possibilities, affirming certain ways of living in the world and diminishing others, making some ways of being men and women more acceptable than others. They provide a template for imagining how we should or could live.”

Stein follows the lives of four individuals as they transition, three as transgender men and one as a gender non-conforming individual.

Stein, while focusing on the travails of the people pursuing transition, also discusses the impact transgender issues have in other ways. For example, Stein refers to a theory that the “rise of the transgender movement is part of a broader backlash against the gains of feminism.” One of the people Stein highlights is “Angie.” Angie feels somewhere between male and female. Angie had top surgery (breast removal), wanted to keep their given name but also live as male while using a gender-neutral pronoun (they). Angie stated, “I like the idea of having a female name, and looking gender-neutral or genderqueer.”

This is one aspect confounding the gender binary created by society to describe everyone. A growing number of people are refusing to subscribe to the gender binary and prefer gender non-binary or bi-gender. Angie also requires a reconsideration of gender and language non-conformity.

Stein’s research is comprehensive and expansive. Macauley DeVun is an activist and artist who doesn’t fully identify as male or female. DeVun uses “all pronouns and enforces none,” and believes many transgender men are ambivalent about maleness, preferring gender-nonconforming if given a choice.

This part of Stein’s discussion is the most engaging. The construct of gender, as defined by society, is changing in incremental ways. Younger generations appear to be growing in their acceptance of gender nonconforming, gender neutral, genderqueer, and similar non-binary designations. The words are less important than the identity expressed by an individual. This creates difficulties for others who may be confused, incredulous, or opposed to any changes.

The positions taken by people quoted and referenced by Stein prompts a greater consideration of the deeper meaning of gender. Is it really as simplistic as “male or female” and can an individual be adequately identified using something other than those “normal” terms? Significant opposition remains in effect on any number of levels, yet the movement to a non-binary designation continues to progress.

In many ways, Stein’s inclusion of gender variance takes the book beyond its purported primary premise involving transgender men, body modification, surgical modification, hormone use, and whether people designated female at birth can, in fact, transition to male.

Stein raises far more complicated matters, thereby making this book a more interesting read. Many of the recent books on transgender issues deal with a particular transgender woman and her efforts to live a fully integrated life. That resulted in the books being very similar with only names, dates and places changing.

Stein’s book goes further in its consideration of gender as a universal and controversial topic. The experiences of Ben, Angie, Parker, and Lucas are an integral part of the book. Those people give an insight into their process of deciding to transition that allows the reader to consider, if not identify with, the problems they encounter. However, those experiences, while giving readers a fundamental understand, underlie the more significant discussion involving gender.

Stein provides readers with a well-researched, clearly written book on a difficult subject. Most people know little or nothing about transgender issues, body modification, or gender reassignment surgery. Most people believe they don’t know any transgender persons; most people are wrong in that regard. The political aspects of the transgender movement are dealt with judiciously. As a practical matter, it will be some time before the laws change to incorporate civil rights protection for transgender people.

Civil rights tend to come in at a glacial pace. This may be unfair, but it is fact. Society tends to hold onto its norms with a death-like grip and only reluctantly agrees to change. In the current political climate, with so many refusing to discuss anything with any semblance of civility, the pace of change has been reduced further.

This book is a catalyst for a thoughtful discussion of these complicated and challenging issues. It can be the foundation from which these evolving changes progress.