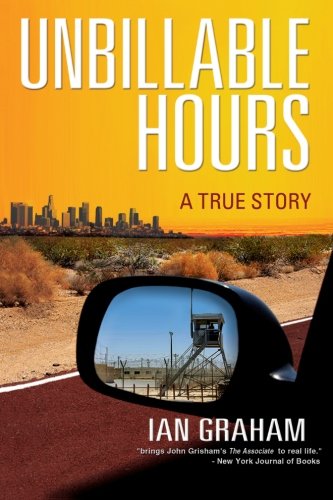 This is a nonfiction story of a person finding freedom. Initially, it appears to be the story of one Mario Rocha, convicted of a murder in the Los Angeles area and sentenced to life in state prison. But it is actually the story of Ian Graham, a lawyer who worked for five years in the white shoe law firm of Latham Watkins. Graham was one of a class of 47 first-year associates hired by the L.A. law firm. Only three of them remained working there after five years.

Graham’s telling of the overwrought work environment at Latham Watkins brings John Grisham’s The Associate to real life. Experienced and new attorneys find themselves pulling all-nighters, sometimes wearing the same clothes for three days. Much of the work involves looking through truckloads of documents and responding to interrogatories in major corporate litigation cases. Graham comes to see that he is “simply unsuited” to working in this environment, where one’s professional life is dedicated to “resolving the problems of, or enriching, corporations.”

To Graham’s good fortune, Latham is committed to pro bono work. “Pro bono public—for the public good—is a tradition of the legal profession founded on the idea that every lawyer should devote at least a portion of his or her time to representing indigent clients or worthy causes for free.” The young attorney Graham volunteers to work with two senior, experienced attorneys on the case of The People vs. Mario Rocha.

At 16, Rocha attended a nighttime party that was crashed by at least two gang members. A young man who was celebrating his college admission was killed that night; this happened at a time when there was pressure from all levels (federal, state, and local) for the City of L.A. to do something about its gang problems. The two shooters are identified pretty quickly, but Rocha is also arrested after being identified in a photo lineup by attendees of the party.

There are multiple problems with the evidence against Rocha, but he is nevertheless arrested and charged with homicide. He is tried with the two known gang members, the presumption being (although Graham claims it was never proven at the trial) that he was also a gang member. Rocha’s family members are confident that he’ll be acquitted, but they hire an attorney with minimal experience who devotes just eight hours of preparation to Mario’s defense. As a result, Rocha is convicted by a jury and sentenced to life behind bars.

This is the background to the events covered in Unbillable Hours. Graham finds himself driving to Calipatria State Prison to meet with Rocha and, surprisingly, discovers that he’s developed a “goddamned conscience.” In other words, he’s found a cause that offer rewards greater than the mega bucks he’s getting at Latham (where the garage houses so many new Mercedes and BMW automobiles that it is said to look like a German car dealership). But overturning a criminal conviction in California is virtually impossible, so Graham’s team is going to have to move Heaven and Earth to do so. They also may need a miracle, which comes in the form of a Catholic nun’s efforts.

It’s no surprise that Mario Rocha is eventually freed, and this telling of how that is accomplished is fascinating. Yet, again, Unbillable Hours is more about Graham than it is about Rocha. When Graham initially visits Rocha at Calipatria he begins to ponder what a “loss of freedom” means. He also comes to see that Rocha is a very intelligent young man who was not privileged to get the same breaks in life as Graham, the son of a lawyer.

This reviewer had just two concerns with this nonfiction account. Although most of the story is told in layman’s terms, there are times when the language will be difficult for an average reader to follow: “It is clear no witness exists who could have proven Petitioner’s innocence as he claimed. The testimony failed to raise credible evidence of Petitioner’s innocence by a preponderance of the evidence.” Yes, this is language from a court document, an order, but it would have been well to translate it into simpler terms.

Graham also fails to ascribe the best of motives to the actions of prosecutors and others in this account. Prosecutors must act on the information gathered and provided to them by law enforcement and/or their own investigators. In general, they are very talented and skilled individuals who do not work to get rich. (Graham, by his own admission, did not know how to draft motions when he became involved in the Rocha case.) It may have been beneficial to have had an addendum giving the assigned prosecutors a chance to express their views and perspectives on the case.

Mario Rocha today is an undergraduate at George Washington University in Washington, D.C. Ian Graham is experiencing a different kind of freedom, speaking at law schools and to defense groups. He no longer makes a six-figure salary, but he is unshackled and able “to see a world and a life beyond the confines” of a large corporate law firm.