Unaccountable: What Hospitals Won't Tell You and How Transparency Can Revolutionize Health Care [Review I] 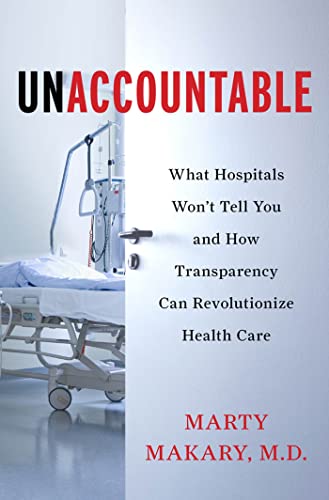 Dr. Marty Makary is a man with a mission: nothing less than to expose and to transform the current broken medical establishment into one that is accountable to its patients. He has impeccable qualifications for the task. As a practicing surgeon for many years, he is an insider who has experienced first hand the inherent abuses in applications of health care.

The author uses a conversational writing style that is clear and concise for the lay reader. Drawing on his experience, he illustrates problems in health care through a wealth of stories. He also discusses studies and surveys done to better gain an understanding of the problem. As the book unfolds, shocking details inspire an urgent call to action.

In the Introduction, Dr. Makary relates his disillusionment with the medical profession that led him to leave medical school. A defining moment was the death of a patient as a result of a procedure the patient did not either need or want.

Dr. Makary enrolled in the Harvard School of Public Health, where he met doctors forming a new discipline in medicine: the science of measuring quality. He became a lifelong advocate for hospital accountability and transparency.

After a year he returned to medical school because he missed patient care.

As Dr. Makary so skilfully relates, the lack of accountability is due to a culture that actually rewards poor performance and increased cost in medical care. The lack of transparency prevents patients from evaluating doctors and hospitals. Dr. Makary provides revealing examples of even prestigious physicians and hospitals that do a poor job of health care.

Part I, Some Random Doctor, sets the current situation in medical care, which includes incompetent surgeons, a system that encourages waste and unnecessary surgeries, and a culture of secrecy that punishes staff when speaking out about safety concerns.

Dr. Makary illustrates where appearances can be deceiving. Dr. Hodad showed impeccable bedside manner and a reassuring demeanor, yet was dangerously incompetent. Dr. Raptor, on the other hand, had an abrasive personality that scared patients and staff, yet demonstrated superior clinical judgement and surgical skill.

Practice makes perfect is an adage particularly relevant with regard to surgical procedures. Dr. Michael DeBakey was an award-winning cardiovascular super surgeon who operated on the Shah of Iran; however, Dr. DeBakey was not skilled in abdominal surgery and disastrous complications ensued.

A recent research study showed a direct relationship between surgical death rates and a surgeon’s experience with that particular operation.

Powerful financial incentives exist against referring a patient to another surgeon, even though another surgeon would be more experienced and competent.

When choosing a hospital to obtain treatment, Dr. Makary advises patients to beware of clever marketing techniques, such as impressive wording on a website or classy new buildings. Dr. Makary relates a story of a young patient who was treated in a “Comprehensive Breast Cancer Center” that was actually grossly inadequate in modern equipment and surgeons’ skill to undertake such procedures. As a result, her reconstructed breast came out permanently disfigured.

A surgeon’s “style” refers to the type of procedure a surgeon prefers to perform on the patient. Advances in modern surgery have led to the adoption of minimally invasive surgery, leading directly to many proven benefits; however, some surgeons may still elect to use more invasive procedures due to financial incentives—or simply because they have never learned the new procedures.

Economists and politicians agree that health care reform requires means of measuring outcomes. Yet hospitals have been reluctant to do so, feeling that outcomes will not be measured in a fair manner. Dr. Makary described two situations that addressed the problem.

Veterans Administration hospitals had such a bad reputation that the U.S. government was threatening to shut them down. A mathematical formula was developed to adjust for preexisting risk factors in veteran patients. Applying the formula showed that the poor performance of VA hospitals was due to treating much sicker patients.

These and other outcome measures were well received by physicians. Many hospitals have applied these measures, but the resultant data are usually kept confidential.

Part II, The Wild West, deals with the issue of who is in charge of accountability in health care. Dr. Makary makes it clear that in the final analysis, currently no one is.

Peer review conferences of surgical complications rarely result in disciplinary action against a physician, since a colleague who speaks up risks hurting his or her career without accomplishing any meaningful change.

State medical boards are responsible for disciplining physicians, but rarely do so. Medical boards usually do not investigate the physicians they license. Once a physician receives a license, he or she can legally do any medical practice, even if it is out of their expertise.

Dr. Makary cites many examples where the overworking of interns and residents has led to medical mistakes.

Financial incentives for physicians and hospitals encourage more tests and procedures. Specialists tend to recommend their procedures even if the patients’ condition does not call for it.

In Part III, Transparency Time, Dr. Makary discusses many developments that promise to improve the outcome of medical care. Mayo Clinic is held up as a standard for a culture that encourages communication, quality, safety, and patient centeredness.

Dr. Makary began a policy of having his notes taken during visits available to patients. This transparency helped to alleviate patients’ concerns and to correct misunderstandings. The use of cameras in the operating room greatly helps to assure compliance with guidelines for surgeons.

Dr. Makary presented his vision of what new accountability would look like by describing specific measures for tracking hospital performance. A consumer would be able to readily access these measures for any hospital. Currently, hospitals are extremely reluctant to divulge this information unless they are compelled to do so.

The book ends in an upbeat manner, noting encouraging changes in attitudes among young physicians, medical schools, and medical societies. Some hospitals are even taking a pledge of transparency.

Dr. Martin Makary calls on readers to be proactive and support this movement toward further transparency.