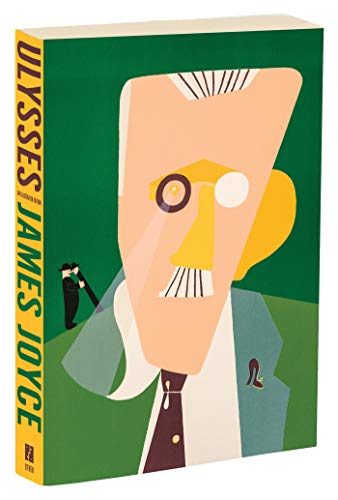 “This is a book to savor, to read slowly, to observe carefully, a book ideal for the insomniac . . .”

With the publication of Eduardo Arroyo’s witty and gorgeously illustrated volume of Ulysses, the seminal modernist masterpiece, Joyce fans will have cause to celebrate the novel’s centenary, even if it costs them $75 to own the iconic new edition. The coffee table book, published by Other Press, is as heavy as a small coffee table and, at 709 pages and 8 ½ inches wide by 13 inches long, nearly as large. But it will be, despite or perhaps for its size and weight deeply cherished by any zealous Joyce fan.

The front cover of the dust jacket alone seems a work of art worth the cost of the book—with its Picasso-esque caricaturist images of the god-like myopic but supremely imaginative writer surrounded by his most famous creations, Leopold Bloom, Stephen Dedalus, and Molly Bloom, signified by a lone yellow-ribboned black high heel, probably tossed off as she slid into bed with her lover, Blazes Boylan.

Most people have heard of Joyce’s Ulysses, even if most have not read it. On Modern Library’s list of the 100 Best Novels, the novel comes in number one. And it’s hard to find a best of the century list that doesn’t include Joyce’s serio-comic magnum opus. For years after its 1922 publication by Sylvia Beach, the owner of Shakespeare and Company in Paris, Ulysses was banned by libraries and school systems, snuck into puritanical America by Hemingway and others, smuggled into priggish English society, and snubbed by the Irish theocracy. Nothing could stop its advance into literary history, though.

June 16 has been celebrated in Ireland as Bloomsday for the past 68 years, since 1954 when writers like Patrick Kavanagh and Flann O’Brien, intoning passages from the novel while sipping pints, visited spots such as the Sandycove Martello Tower (the setting of the opening scene with Buck Mulligan and Stephen Dedalus), 7 Eccles Street (the site of Leopold Bloom’s home), and Davy Byrne’s pub, (where Bloom paused in his odyssey for a gorgonzola sandwich and a glass of wine). Ulysses has become a novel recognized as a world masterpiece, and Bloomsday has grown into a global celebration akin to the running of the bulls in Pamplona.

In the late 1980s, the renowned painter, graphic artist, and set designer Eduardo Arroyo suffered a grave illness, but his recovery was quickened, he said, because he worked on illustrations for Ulysses that would coincide with the 50th anniversary of Joyce’s death. Joyce’s grandson, Stephen, however, would not approve of the collaboration, saying his grandfather never wanted the novel illustrated. To the contrary, biographers claim that Joyce asked both Picasso and Matisse to illustrate the novel. The project continued, and in 2011 (when the novel went into the public domain) Arroyo teamed up with Galaxia Gutenberg. In 2018 (the last year of his life) Arroyo found out that Other Press would publish Joyce’s text with his paintings and drawings.

Arroyo’s playful and inventive artwork, at once cartoonish and mesmerizing, is a perfect match for Joyce’s mind-bending narrative. Both recall the Joycean demand—an ideal reader with the ideal insomnia. This new version of Ulysses compels the reader to linger over words and images alike, from the moment stately, plump Buck Mulligan comes to the stairhead bearing his razor and bowl of lather and the reader gazes from those words to Arroyo’s colorful painting on one side of the text and black-and-white drawings on the other.

This is a true collaboration, where words enhance pictures and pictures illuminate words. Perhaps even more importantly for a novel like Joyce’s Ulysses that requires slow attention to nuances both serious and comic, Arroyo’s strange, compelling artwork forces the reader to pause, to laugh, and to ponder. Arroyo’s images, like Joyce’s narrative, are ribald and riotous, clarifying and disorienting, representational and surreal, simultaneously sexy and sordid. In a word, wonderful.

This is a book to savor, to read slowly, to observe carefully, a book ideal for the insomniac, or a book that will turn the insomniac into an ideal reader.