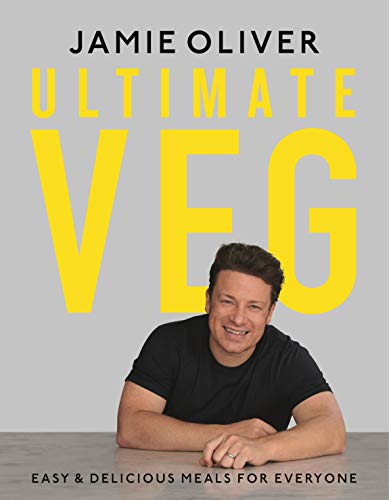 “Plants are the answer, and plant-based eating is our future.”

Jaime Oliver is a prolific cookbook author. His latest creative endeavor is Ultimate Veg, which sounds like an immense undertaking—“ultimate” being the best achievable or imaginable of its kind. There are probably hundreds of vegetarian and vegan cookbook writers who would challenge his claim. To date Oliver has published 32 cookbooks with a variety of titles and subject matter. He has already released a vegetarian book with the shortest title: Veg.

The cookbook Ultimate Veg adds many vegan suggestions to the author’s already copious repertoire of vegetarian options. What exactly is the difference between a vegetarian diet and a vegan diet? Why would there be a necessity to move toward a vegan diet?

It can be difficult to make the transition from a meat- and dairy-based way of eating to a plant-based formulation. One advantage is that transitioning to a vegetarian way of eating first allows one to continue using dairy products, which are often very difficult to eliminate.

A vegan diet is beneficial on many levels. First, since climate change causes much angst and meat and dairy production account for more gas emissions than cars, trucks, airplanes, and ships combined, the destruction of the earth can be reduced with veganism.

Secondly, a vegan diet is beneficial to one’s health, eliminating many diseases that can be controlled by food such as diabetes, heart disease and cancer. The New York Times quotes that “becoming vegan would be the most plant-friendly way to go, followed by going vegetarian.”

In his Ultimate Veg, Jamie Oliver is offering food options that will help not only our health but also the health of our planet. He believes that eating and cooking more “veg” can be achieved by creating “delicious food that just happens to be meat free.”Jamie Oliver gets our attention by creating comforting, delicious, and appealing recipes. His style of cooking has been referred to as “approachable cuisine.” The absence of meat is unnoticeable.Ultimate Veg has many recipes to choose from. A lot reflect the diverse culinary history of the British Empire. The reader would certainly expect to see recipes with an Indian influence like a vegetarian tikka masala.Jamie Oliver is a British chef who uses a variety of ingredients not commonly found in the American kitchen. His first recipe, a crispy cauliflower “katsu,” is popular in England and normally made with chicken. But here Oliver creates a “katsu” made with cauliflower. The reader will discover that “katsu” means cutlet in Japanese. Although roasted cauliflower is a common vegan recipe among plant-based connoisseurs, Oliver’s creation moves “katsu” to a higher plane by being adventurous with the ingredients.

The vegetarian recipes can easily be transformed into vegan varieties by eliminating a few ingredients. Replacing cheese made from cow’s milk with a vegan cheese often made from nuts is an option. Or using coconut milk instead of yogurt creates a vegan dish.

The cookbook ends with hints and tips offering ways to make the transition to a vegetarian lifestyle. The last piece of information is a quick lesson on nutrition. Perhaps added as a second thought and sounding a bit repetitive, the novice might find it particularly worthwhile if they are new to “veg eating.”

The reader should get to know Jamie Oliver. He is a crusader first as well as an author and chef. Search him out and listen; read what he has to say about food. He shares how Americans die as a result of the food that they eat. He admits that he “saves lives in his own way” through food. He concedes that he is only a chef but believes that the “power of food has a primal place in our homes.”

Oliver is an ardent advocate for eating healthfully, especially focusing on the children in our families. “Diet related disease is the biggest killer in the United States right now.”

Jamie Oliver is passionate about his message. He believes that there is a necessity for a “food revolution.” Plants are the answer, and plant-based eating is our future.