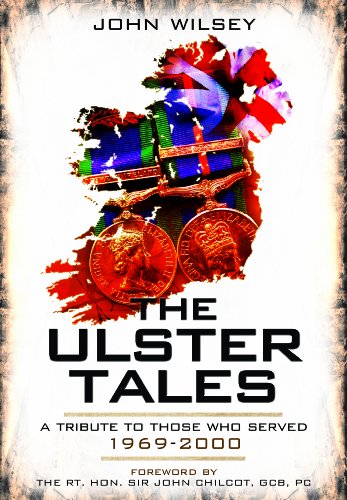 “John Wilsey takes military history a step further, putting us in the many pairs of shoes of those directly involved and effected by the violence and tensions of The Troubles.”

From 1969 to the 2000, Northern Ireland was embroiled in "The Troubles," a conflict predominantly between Loyalist Protestants and Nationalist Catholics. In short, the Loyalists wanted to remain under United Kingdom rule, while the Nationalists wanted to secede from it and unite Ireland. What ensued was a prolonged and messy guerrilla war waged on complicated urban battlegrounds. For more than three decades tensions remained high, paramilitary and military forces clashed, and acts of terrorism took center stage. Almost twenty years on, The Troubles are a fading memory for some. For others, they are as crisp and clear as they were before the turn of the century.

Author John Wilsey remembers those times well. It's no surprise, since he served seven tours in the province with the British Forces in every rank except one, eventually rising to GOC and Director of Operations in Northern Ireland. The Ulster Tales is presented as a tribute to those who served, but it is much more than that. For as complex as The Troubles were, Wilsey's book proves to be a commendable crash course in the various politics, places, and people involved. Ten "tales" make up the chapters, each dedicated to a real-life individual who served in the conflict; reporter, soldier, chief executive, source handler, widow, general, civil servant, secretary of state, spook, and policeman.

Each and every one of these individuals represent countless others in similar positions and predicaments throughout Northern Ireland. Whether it was combat boots on the ground, or intelligence gathering conducted through back channels, the operators had their work cut out for them day and night, 24/7. Politicians, too, tried hard to get a grip on the situation which was like handling a live grenade more often than not; one that always threatened to blow up in their faces. Although the ongoing battle could be black and white between the most hard-line fanatical opponents, for everyone else the conflict was comprised of endless shades of gray that had to be carefully sifted through in order to make progress.

Through the author's impressive knowledge and access to the players in these war games, readers gain valuable insight into all aspects of the conflict. We see journalists struggling to maintain integrity in a highly politicized arena where straight facts were hard to come by and the truth could be bent in any direction.

We learn of the soldiers' tensions when tasked with peacekeeping in the face of constant hostility. We feel the creeping fear of covert operatives worried about blowing their cover. We sense the anxiety and alarm of high-ranking officials trying their damnedest to stop simmering hatred from boiling over. And we feel the pain of those who lost their loved ones to utterly senseless brutality.

Stories of successes and failures, triumphs and tragedies, survivors and those who succumbed—The Ulster Tales has it all. There is much to unpack and absorb in this book: facts, figures, and many detailed accounts of the notable names, locations, and procedures involved in dealing with a nation being pushed closer and closer to the edge. Although some of it can feel overwhelming at times, digesting all the data is integral to understanding a situation that has long been misunderstood by the general public.

John Wilsey takes military history a step further, putting us in the many pairs of shoes of those directly involved and effected by the violence and tensions of The Troubles. The result hits home, leaving us with a clear sense of what it was like for many of the men and women who were there.

J. Kent Messum is a staff reviewer at New York Journal of Books.