The Ugly Game: The Qatari Plot to Buy the World Cup 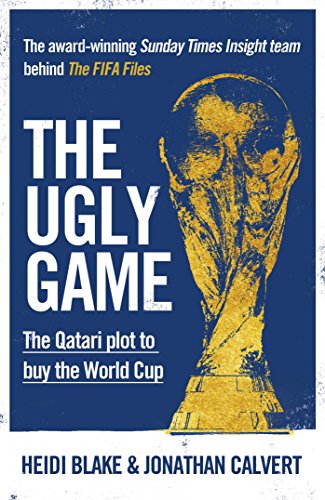 You don’t have to be a soccer fan to find The Ugly Game riveting and insightful as it reveals the truth behind the “selling” of the 2022 FIFA* World Cup to Qatar, surely the biggest corruption scandal of the sporting world.

Coming from multi-award winning journalists, Jonathan Calvert and Heidi Blake, of the British Sunday Times’ Insight team, it is hardly surprising that this book is a precisely documented exposé on the corruption that has stalked the hallowed FIFA corridors for far too long.

What is perhaps surprising is just how successfully it has translated from a series of headline-grabbing news stories into a gripping book. This is in no small part due to the ability of these two writers to switch between their journalistic mandate to accurately report the facts, embellishing the text with just enough contemporaneous detail to give a real flavor of the shady world they are exposing—and the eye-popping sums of money involved.

The reader immediately grasps the high stakes as the gilded sponsorship deals are explained. These are matched by the enormous wealth, prestige and power of Qatari billionaire, Mohamed bin Hammam, the man behind the tiny desert country’s triumphant winning of the race to host the 2022 World Cup.

Bin Hammam grew up in poverty in the quiet town of Doha during the 1950s, before the explosion of oil and energy wealth that transformed his country, and his own personal prosperity. He adored his country and his ruler, and he worshiped soccer, rising to great heights within FIFA and the voting executive committee.

Head of state Sheikh Hamad pumped $32 billion into an ambitious plan to transform Doha into a center for “sports, tourism, business and culture,” part of a long-term strategy to bolster Qatar’s future economy as the country’s oil and gas supplies dwindled. The World Cup would be his “big cake,” the catalyst he needed.

When the head of FIFA, Sepp Blatter, seeded the idea to bin Hammam’s beloved Emir that the 2022 World Cup really could be brought to Qatar, bin Hammam was handed the job of fulfilling Sheik Hamad’s dream, and bring soccer’s highest prize to a desert where summer temperatures meant the teams would be playing in temperatures exceeding 40 degrees Celsius (104 degrees Fahrenheit). With the votes for this and the 2018 tournament to be held simultaneously, the levels of bribery and corruption in the run up period were to be unprecedented, even by FIFA’s standards.

The main thrust of the book now kicks in as, thanks to an unnamed well placed whistle-blower, Blake and Calvert were given access to millions of documents, emails, and transcripts that left a paper trail around the world detailing the corrupt dealings and bribery bin Hammam undertook to achieve his goal.

His first mission was to ensure the continued support of the deviously powerful Blatter; being instrumental in his successful 1998 presidential reelection campaign achieved this. In fact so dedicated was bin Hammam that when he received news in Paris on the eve of the elections that his son lay “horrifically injured” in Doha after a car crash, he chose not to go to the hospital, but stayed at Blatter’s side.

The description of the mountainous task ahead and the potential dangers faced by the two journalists when they were holed up for several months in what they called “the bunker:” a grubby attic above a store, is gripping and peppered with humor. The methods and eye-popping sums of money used by bin Hammam to bribe voting members and effectively “buy” the World Cup for his country are astonishing, as myriad meticulous details the writers pieced together. The discovery that bin Hammam facilitated a massive gas deal between Qatar and Thailand to secure that country’s important vote revealed yet another “tier to the strategy.”

So vast is the whistleblower’s cache of data and bin Hammam’s scheming, the reader can begin to become immune to the revelations. Gradually the sheer scale of the corruption lessens the impact of all this crooked commerce. The next gift of a priceless painting, the all expenses paid junket or few hundred thousand dollars thrown at another FIFA executive ceases to shock. It could be likened to what many charities report encountering; a numbing “compassion fatigue” that switches off potential donors. But the web demanded to be unravelled and unravel it they did!

Despite wading through these toxic waters, the authors appear to harbor a sneaky sense of affection and perhaps a hint of empathy for the man who was ultimately thrown to the wolves by Blatter and abandoned by his Emir for achieving what he had been brought in to do. By the end of the book, many readers probably share these same emotions as bin Hammam comes across as a devoted, ultimately likeable man on a mission.

The scandal has left FIFA in disarray as it struggles to regroup but its house is still far from in order. This book also warns that migrant workers are already dying and thousands more could follow, heaping further shame on the Emir’s “big cake.” These workers, who flocked to the country to build the World Cup city, live in virtual slavery as they “labor all day under the scorching sun, often with no drinking water or food.” Their employers take their passports so “there is no escape, except in a coffin.” This, surely, is the fallout from a corrupt campaign that should command the world’s attention; the blood of these people will be a tragic and permanent stain on our “beautiful game” if it is not addressed.