The Two Hotel Francforts: A Novel 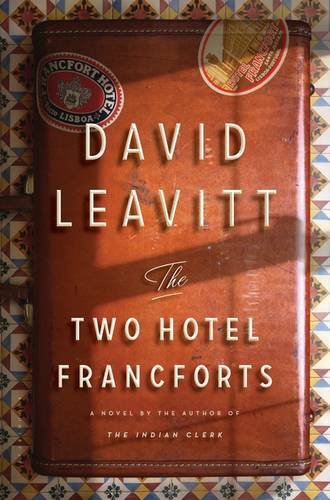 “. . . the first novel in a very long time that this reader actually stayed up late . . . to keep reading and find out What Happens Next.”

There is a splendid sort of lyricism to be found in nearly all of David Leavitt’s writing from the early days of Family Dancing onward. That lyricism, along with a Romanticism worthy of Wordsworth himself, is on hand here in Mr. Leavitt’s new novel The Two Hotel Francforts.

Set in Lisbon at the moment in which the world held its breath still hoping against hope that the oncoming war could still be averted, The Two Hotel Francforts takes advantage of many of the same themes that made Casablanca the classic film that it is. There is the same sense of entrapment—Lisbon, like Casablanca, as a safe place, a city to which many fled on their way to freedom in America, and a city in which many found themselves trapped when the rules of conduct suddenly shifted—the same sense of encroachment on the part of Nazi Germany and its allies, and the same sense of heightened emotion that these twin engines of warfare brought with them.

The Two Hotel Francforts can be likened to other source materials as well. There’s Brideshead Revisited, for one. Each book is set in the same timeline, one in England, the other in Portugal. Both are studies of the British upper class, fretful at the inconveniences of war. Each has its Julia. In Waugh’s novel she is the younger sister of the troubled Sebastian, and the object of love for our hero, Charles Rider. Here, in Leavitt’s tale, Julia is the wife of your hero, Pete Winters, the woman from whom he is estranged.

A character about whom her husband comments:

“I wish Julia hadn’t spent to so much time playing solitaire, but she did, and so it made sense that she should have wanted an expensive, cold, magnificent, austere apartment to play it in.”

Ah, the apartment, the Paris flat, the thing that young Pete had promised Julia to get her to run away from her family in Manhattan and live with him in France. The apartment—it becomes, after a time, like Chekhov’s Cherry Orchard, the thing gone and yearned for, the burden lifted, the beauty lost.

As in the aforementioned Casablanca, Paris here represents all the beauty that has been lost, the freedom that has been stolen, the valor that seems in vain.

There are obvious echoes of the Lost Generation and of Fitzgerald, Gatsby especially, with the whole “the rich are different from you and me” meme that the author played like a lute.

Here the rich are embodied by heirless Iris Freleng and her penniless, charming, neurasthenic husband, Edward. As in Gatsby, the rich know when to flee and do so first class. They also mingle when obliged in the lives of the poor (and more on that in a moment).

And so there are experiences to be had in fine restaurants, in casinos, on European beaches, and, finally on the ship to America. There is also a beloved Daisy in this book as well—although here she is a Jack Russell Terrier.

As in the Tender Is the Night Julia is the stand-in for Zelda—the unattainable young beauty, the delicate rose who turns out to be a bit of a nut job once she is attained. Instead of ballet, she dedicates her life to solitaire, playing game after game with her superlative double deck.

Thus The Two Hotel Francforts has its pages packed with all that a reader could hope for in terms of a well-constructed, perfectly-realized tale. It is the first novel in a very long time that this reader actually stayed up late (even to the point of washing his face in cold water) in order to keep reading and find out What Happens Next.

Rarer still, it is the sort of book that leaves the reader satisfied; a novel that presents an ending worthy of the story—an ending at once inevitable and surprising.

But that ending is still far off when the two couples meet and fall into conversation:

“’Where are you staying?’ Edward said.

“’The Francfort,’ Julia and I said in unison.

“’You must be at the other one,’ Edward said. ‘Otherwise we would have seen you.’

“’There are two—the Hotel Francfort, which is over by the Elevator, and the Francfort Hotel, which is right here, next to the café.’

“’That’s the nicer one. You know, it’s become a running joke among the foreigners. “Just think, here we are fleeing the Germans, and we end up at a hotel called Francfort.”’”

To read any book set in this era when the stakes were so high is to expect that somewhere, somehow, a illicit romance will catch fire. That there will be an Ilsa for each Rick and that the handicap of marriage on one or both parts will only serve to intensify the passion.

Here Mr. Leavitt presents his twist on the old theme, something that readers of his past works might expect even before it happens, when Pete and Edward go for a drive at night and end up at the beach:

“The water stung my ankles. ‘It’s cold,’ I said, stepping back, but Edward wasn’t listening.

“’Where the land ends and the sea begins,’ he said. ‘That’s Camoes, the great Lusitanian poet. He wrote that about Cabo da Roca, at the westernmost point in all Europe. It’s just a little ways to the north. Look.’ He put his hand on my shoulders, pointing me in the direction of some murky cliffs. ‘Can you see it?’

He did not move his hands.

“’I have never in my life been so happy as I am at this moment.’”

The chapter ends shortly thereafter, with Pete once more losing his glasses:

“Very delicately, he took the glasses from my face, folded them and rested them atop his pile of clothes.

“And he said, ‘So you can truthfully say you never saw what was coming.’”

The relationship that follows between the two married men reads like Brief Encounter, if Noel Coward had been more forthcoming about his sexual urges and had allowed this characters to have had contact that albeit brief was more thoroughly an encounter.

What surprises is that by giving the romance to the men, Mr. Leavitt shakes loose the old conventions and makes what easily could have been a tired tale of wartime romance seem like something new. The double-whammy taboo of the married male lovers lifts the narrative, grants urgency, intensifies risk, and, at the same time, gives the author permission to rhapsodize:

“Either I was in the throes of the strangest dream I’d ever dreamed or everything I’d known until now—my entire life—was the dream, and Edward the warm bed in which I had at last awakened from it.”

The Two Hotel Francforts is a full-blown cinematic romance set against an impeccably researched representation of the crush of European refugees into the port of Lisbon early in 1940. The time, the tale, and the tempo all seem right.

It is a worthy companion to anything else that David Leavitt has written in his illustrious career. Furthermore it raises the bar on most of the fiction published so far this year—both compelling and elegant—and highly recommended.