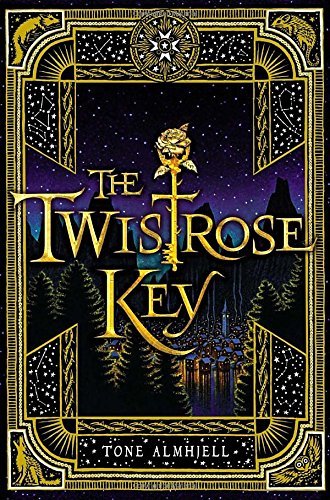 “Nearly every creature who lives here was once loved by a child of Earth, and loved the child in return. That bond was so strong that when the animals died, they woke up here in Sylver to live a second life.”

This quote so aptly captures the magical wonder of The Twistrose Key, the debut novel by Tone Almhiell. If you’ve ever loved a pet that has passed on, and are willing to partake of more than a little adventure, this jewel of a story will capture your heart and your imagination.

Eleven-year-old Lin Rosenquist discovers a mysterious key when an unexpected parcel arrives to her home. She immediately connects with it and wouldn’t you know it, it opens the door of the cellar that’s been locked ever since her family moved into their rented home.

Hidden behind that cellar door lies Sylver, a world that is more amazing than even the creative mind of Lin Rosenquist can dream up. And what makes it the most amazing of all, is the discovery that her beloved Rufus is there. He’s the pet she lost in death and lies buried under the rosebush in the yard . . . or so Lin thought!

Now Rufus and Lin must join forces to save the inhabitants of Sylver, but saying it won’t be easy is an understatement. Malicious forces are doing everything in their power to see that they don’t succeed. Can Lin fulfill her destiny and conquer the evil that threatens to overwhelm her, dearest Rufus and her new compatriots? You’ll have to enter the majestic, magical world of Sylver to find out.

And a magical world it truly is. The author exhibits a rich and fertile imagination, an ability to enchant both young and old. Age is no impediment to enjoying this story.

The tale is as crisp and zesty as the cold and crystalline environ in which it is set. Readers should take their time and read with care to fully grasp and decipher the fresh mythology of the land of Sylver. It’ll leave you gasping, laughing, and maybe shedding a tear or two.