The Twelfth of Never 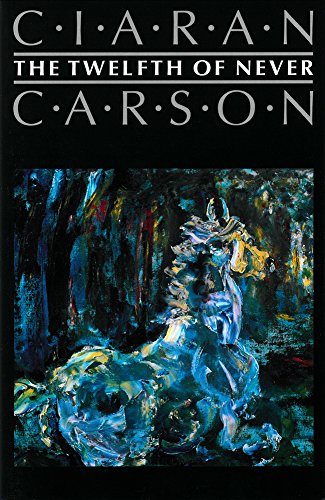 "The collection is a chronicle of practice and refining performance."

This often-overlooked collection of sonnets is what we North Americans might call a grab-bag or catchall of fantastic themes that stray into psychedelia.

Take the recurring poppy flowers. They are “motifs” in the sense of repeating ornaments. We’d say they’re raised to the estate of symbolism when they become vehicles for central themes. They’re the flowers that commemorate soldiers fallen in illustrious wars—and also in dimly recalled failed rebellions, nationalist plots, and foreign mercenary ventures.

The poppy worn on Armistice Day is like Ash Wednesday’s smudges, token of citizens’ communion in the nation-state’s self-sustaining ritual, which sends the young glorious visions before butchering them. Opium is the poppy’s fruit in these poems, dreams their feast.

They are a causeway between Carson’s delirious Ireland and the ancient-modern world of Japan he visited in the late 1980s. But in these poems even Japan cannot sustain its integrity as only itself; it becomes the fabled Tír na nÓg, the fairy kingdom west of the sun. The poppy fuels the native poet’s fancies of other worlds and spurs the emigré’s nostalgia for home. Like many other things in The Twelfth of Never, poppies are exactly what they seem to be, but they’re also much more than they seem.

First published in 1998, the collection appeared at a moment in Irish and international poetry when many poets were moved by enthusiasm for contemporary critical theory to accentuate the problems of language as a guarantor of referentiality. A compatriot like Paul Muldoon saw his work’s international breadth as an object lesson in how the empires of culture and language break down at liminal boundaries.

By contrast, Carson’s poems seem to be enthralled with language and the diffuseness of narratives. Only the most superficial reader would call this confidence in poetic figuration “quaint.”

Carson is polylingual, an esteemed translator of poems in Irish and Italian. He is also a musician and singer. Many extended sequences are linked by the content of traditional ballads referenced as titles. Like the songs and chants of the traditional seanachie or the itinerant busker’s familiar repertoire, Carson recognizes that all his poems’ claims have just as much validity as their performance can persuade.

His work suggests the pointlessness in catastrophizing language breaking down, when performative language remains the water we swim in as well as the air we breathe.

Which is not to suggest that there aren’t treacherous currents and winds laced with opium fumes. Like Seamus Heaney in Lightenings, Carson demonstrates that the “wonderful” medium of language can report the appearance of ships sailing in the air, whose sailors refuse to come down to earth lest they drown.

Carson sees the mysterious dualities in Irish fabulist tradition as another conduit by which the trouble of knowing what’s real from what’s false is shown to be both as insoluble and suspect as Zen meditation on the “necessary” difference between the fish’s swimming and the bird’s flying.

When he reimagines the ninth century monastic poem Pangur Bán, his poet-monk is distracted from scholastic transcriptions by a cat companion until:

“We rolled in serendipity upon the mat.  / I forged a chapter of the Universal Laws.  / Then he became the man, and I became the cat.”

There are “Universal Laws,” and by frequent experience we find those laws negated and obviated by the matters of our lives—language not least among them. Carson’s adherence to sonnet forms is constant but not technically slavish.

It’s a working argument for how traditional forms enable fantastic intuitions. Readers who dislike the banal “old-fashioned” conventions of formal poetry may find mind-changers here if they can learn to breathe the air the poet breathes and navigate some of the waters he swims.

As for readers and poets who are already engaged by contemporary formal poetry, they’ll find an extended body of work that is authentically sustaining. If the poems in The Twelfth of Never are “masterful,” that’s true because they show so much disciplined work and so many chanced risks.

The collection is a chronicle of practice and refining performance. Elements from earlier pieces recur with new roles in succeeding verses. Ideas develop into full arguments that may later dissolve into half-thoughts and ruminations. Some poems are astonishing, unforgettable. Others intrigue but seem to be preliminary themes that only later are given full throat as songs.

Carson sees provisional successes as integral to triumphs. Nor are spectacular poems always the most memorable. A poet absorbed in the work takes the difficulty—even the implausibility—of the goal as intrinsic to the process. He’s a Zen archer, Carson insists.

“When he aims at the bull he closes his eyes. / Sometimes he hits it dead-on with a mighty whizz. / Sometimes he’s way off target, which is no surprise.”

Manny Blacksher was Assistant Editor at the Birmingham Poetry Review. He was designated an “emerging poet” by Poetry Ireland in 2001. Over 50 compositions have appeared in numerous publications in the U.S., Ireland, England, and Scotland. He was an instructor in the English Departments at the University of Alabama at Birmingham, Trinity College, University of Dublin, and McGill University.