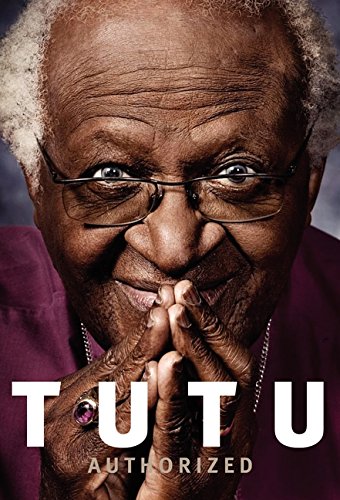 “What Tutu: Authorized reveals, in meticulous and articulate detail, is the little man’s fearless and unflagging determination and his crucial role in the fight against one of the world’s most cruel forms of oppression—apartheid.”

It would be easy to slip into syrupy sentimentality over South Africa’s Archbishop Desmond Tutu. The “Arch” or “Bish,” as the media refer to him, is not exactly gnomish, but he strikes a comical little figure with his very large nose, infectious giggle, and impish grin—perfectly illustrated on the cover of this biography. It’s a package that tends to invoke warm, fuzzy feelings in all who cross his path.

It’s no wonder, then, that this book has a somewhat mawkish beginning. Thankfully, Pulitzer Prize-nominated South African journalist Allister Sparks quickly gets the authorized biography (on which he collaborated with the Arch’s daughter, the Reverend Mpho Tutu), back on track.

What Tutu: Authorized reveals, in meticulous and articulate detail, is the little man’s fearless and unflagging determination and his crucial role in the fight against one of the world’s most cruel forms of oppression—apartheid.

Contained in the next 350 or so pages is a sweeping history of a country in turmoil, moving from the brink of civil war to become the Rainbow Nation, and the former Archbishop of Cape Town’s crucial part in both its struggle and rebirth.

By the end it is obvious that, despite his small stature—and that purple-robed, cute-and-cuddly exterior—the steely Tutu is a very big man indeed.

His role in the liberation struggle was incredible on many levels. While Nelson Mandela was incarcerated on Robben Island by the Afrikaner oppressors, Tutu carried the flame of the fight into black townships, into white churches, to all levels of South African government, and even onto the world stage, making sure the fire could not be doused by those keen to see the status quo continue.
He did not do it singlehandedly, of course, and nowhere do his biographers suggest that he did. But his high profile “theological civil war” ensured attention for the desperate fight for justice.

Tutu never claimed to be a strategist. He operated almost entirely on instinct and deep faith, even in the most volatile situations, often causing waves of conflict even within the South African Council of Churches (SACC).

His instinct stood him in good stead.

Even after the 1977 death in detention of Black Consciousness leader Steve Biko, which sent a wave of fury through the black community, Tutu was able to face a seething, angry crowd of protesters and urge them to believe that being pro-black did not mean being anti-white.

He continued seeing a bloodless path to reconciliation that was alien to others, and he did not bend in his belief, even when he was effectively put on trial at the Eloff Commission, set up by then-Prime Minister PW Botha, the so-called Groot Krokodil (Afrikaans for Great Crocodile), in an attempt to crack down on the SACC in 1982.

During a three-hour testimony, he declared: “I want the government to know now and always that I do not fear them. They are trying to defend the utterly indefensible, and they will fail. They will fail because they are ranging themselves on the side of evil and injustice against the church of God. Like others who have done that in the past—the Neros, the Hitlers, the Idi Amins of this world—they will end up as the flotsam and jetsam of history.”

Mandela said about him: “Sometimes strident, often tender, never afraid, and seldom without humor, Desmond Tutu’s voice will always be the voice of the voiceless.”

Years later, when the fight against apartheid had finally been won, Tutu ensured the “voiceless” were heard at South Africa’s groundbreaking Truth and Reconciliation Commission, set up to probe the human rights violations of the apartheid years.

His tears left an indelible memory on the psyche of the nation as he listened to so many of the horrors kept hidden even from South Africans during years of vicious racial violence.

His traveling confessional heard 31,000 cases of human rights abuses in three years as it laid the foundation for an ongoing process of national reconciliation through forgiveness, amnesty and the African spirit of ubuntu—a linking of respect, helpfulness and trust with a concept of community.
Heading the commission was, by Tutu’s own admission, the most challenging job of his long and illustrious career. He was “buffeted by winds of controversy from all points of the political compass,” writes Mr. Sparks.

“Some on the left thought the process was a cop-out that allowed many who had committed atrocities to get away literally with murder, while others on the right accused it of being an Afrikaner witch-hunt; yet others objected that it was the foot soldiers who caught the flak, while their commanders who handed down the orders got away scot-free.”

To make matters worse for Nobel laureate Tutu, he was diagnosed with prostate cancer in January 1997 and underwent treatment in the United States, forcing his absence from the commission for several months. Later, another of its 17 members, liberal parliamentarian Alex Boraine, a businessman and former president of the Methodist Church in South Africa, wrote: “I think Tutu’s illness affected him very deeply but in a strange way enabled him to guide and direct the work of the commission with ever greater sensitivity.”

The final result of the commission was a “political miracle” that brought sworn enemies together to engage one another face-to-face. “Through a process of acknowledging one another’s pain and tears and recognizing one another’s identity imperatives, they were able to arrive at a compromise deal that was eventually captured in a new constitution.”

Mr. Sparks sums up: “So . . . what kind of person do we have here in this humble high school teacher who became a lukewarm priest and eventually grew into a turbulent peace activist and Nobel laureate and is now entering his octogenarian years not just as a man for all seasons but for all faiths and all humanity? He is, I believe, a man whose expanded worldview is extraordinarily relevant in the bewildering times in which we live. . . .

“In an age where ideological conflict has receded from the world stage, issues of identity, of culture, religion, language groupings, and so on, have come to the fore as rallying points to mobilize people around issues of grievance, real or imagined . . .

“This is where the global relevance of Tutu becomes apparent. The essence of Tutuism, if one may coin such a word, is precisely that need to understand other faiths and cultures and accept their validity.”

Tutu once told a conference of interfaith leaders: “Don’t insult people of other faiths by saying: ‘Oh, actually our God is your God too. In other words, you’re Christians without knowing it.’ Don’t insult people by reducing their faith to that.”

“Surely there is a profound lesson here for our fractious and diverse global village that can trace its origins back to a place not far from where this once sickly Sophiatown street-kid was born.”
The “Arch” finally retired this year but still his tongue does not rest. Fellow Nobel laureate the Dalai Lama once said: “His voice is important. He should stand firm as he has done. He must continue, please, until his last breath.”

And continue he has done—ironically, even taking up the cause of the Dalai Lama himself, who was effectively forced to withdraw a South African visa application to attend Tutu’s 80th birthday in October this year by the dallying African National Congress government, which was trying to keep on the good side of its trade partner China.

If there’s injustice in the world, the Arch will still say “Onward Christian soldiers” and be ready to lead the fight against it.