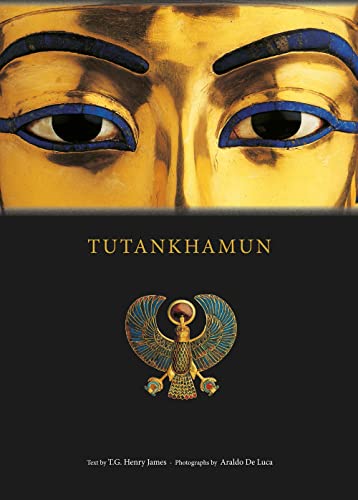 “For those who can’t travel to Egypt, this book is the next best thing.”

Much has been written about the treasures of Tutankhamun and the brief history of the boy king, but this book holds a unique place simply due to its beauty as an object. The pages are heavy and satiny, the layout clean and welcoming to the eye. The large trim size showcases the exquisite photos of each object found in the tomb. The entire production is a reminder of what a book can be and how a digital screen, convenient though it can be, doesn’t measure up to these kinds of standards. The clear text is also a treasure, putting King Tut solidly in the context of his father, Akhenaten, the distinctive 18th Dynasty Pharaoh who introduced and promoted a new religion focusing on Aten:

“Every aspect of life was dominated by the Aten, whose worship became, seemingly, the supreme, even the sole purpose of existence.”

Tut’s link to the Pharaoh isn’t clearcut, but James makes a convincing argument for the prince’s heritage:

“There is only one reference to him from the time of the reign of Akhenaten: on a block from one of the destroyed buildings of Akhenaten [Akhenaten’s new royal city] he is described as ‘king’s son of his body.’ Such a statement establishes royal parentage, but it does not make his mother Nefertiti. It is very likely that Tutankhamun was fathered by Akhenaten, but by a secondary wife. The probable candidate is Kiya, the very existence of whom became known only in fairly recent years.”

The first part of the book provides the ancient history of King Tut and the world he lived in. The second part tells the dramatic story of the tomb’s discovery, including the testimony of Howard Carter, the British archeologist and Egyptologist who found the incredibly intact tomb:

“The decisive moment had arrived. With trembling hands I made a tiny breach in the upper left hand corner. . . . At first I could see nothing . . . but presently as my eyes grew accustomed to the light, details of the room within emerged slowly from the mist, strange animals, statues and gold— everywhere the glint of gold. . . . I was struck dumb with amazement.”

The final part of the book catalogs in gorgeous details the riches of the tomb, leaving the reader amazed much as Carter was. The photographs are stunning, and each object is introduced and explained clearly. This is a book in which words and text work together to create an immersive vision of a unique time and place. For those who can’t travel to Egypt, this book is the next best thing.