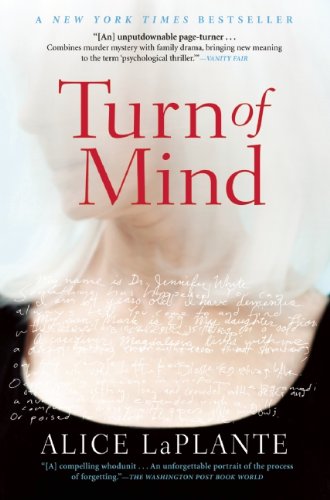 “. . . a unique premise for a murder investigation. . . . compulsively readable. . . . the mystery of the mind has surely been solved.”

Though Turn of Mind revolves around a murder mystery, the real mystery being investigated is what goes on in the mind of someone suffering from Alzheimer’s disease.

Jennifer White was a successful orthopedic surgeon forced to retire in her fifties due to dementia. When the novel opens she is 64 years old and somewhere in the middle stages of the disease. Amanda, her neighbor three doors down and her best friend for decades, has been found dead. Four fingers were surgically removed from the right hand of the dead body but other than that virtually no forensic evidence can be found, making Jennifer the prime person of interest in the case.

Certainly a unique premise for a murder investigation.

How do police investigators get reliable information from a woman who does not recognize her own children some days? If Jennifer had committed the murder, would she even remember doing so? The novel is compulsively readable.

As the shared history of Jennifer and Amanda is revealed, it becomes clear that despite their professional accomplishments, these two women lived in a fraught state of moral ambiguity, playing out many years of crime and punishment. Jennifer was a better surgeon than she was a mother. Amanda was an unyielding and strict schoolteacher with no children of her own. Both were married to eccentric men, and the couples knew more about each other than might be strictly healthy.

Anyone who has cared for or lost a loved one who was in the throes of Alzheimer’s will recognize the day to day states Jennifer exhibits, the techniques used to halt the memory loss, the medications used and the effects of steady deterioration on friends, relatives and caregivers. In fact, the main appeal of Turn of Mind could be its purported inside view of Jennifer’s mind, precisely because no one actually knows what an Alzheimer’s patient is thinking, perceiving, or experiencing except by observing the person’s actions and responses.

Improbably, the novel is written primarily in the first person voice of Jennifer, alternating between her journal entries and the thoughts in her mind as she thinks them. Alice LaPlante, who herself cared for a parent afflicted with Alzheimer’s, imagined her way into the mental workings of dementia.

One of the notable features of family members interacting with the Alzheimer’s victim is the way they will discuss what they think might be going on with that person’s mental and emotional state. What a relief then to read exactly what Jennifer is thinking, feeling, and perceiving as she disrobes in the middle of a grocery store or attempts to ascertain what her son and daughter are trying to tell her.

Some of the most poignant scenes are those where Jennifer recalls incidents from her early life: her mother’s death, her daughter’s birth, falling in love with her husband.

Whether any of it is true or probable, author LaPlante has the literary chops to carry it off. She makes the reader truly care about Jennifer. She gets you on her side. In the end, when the mystery is solved, you are relieved at the outcome, for Jennifer’s sake.

Nearly all the prepublication reviews from both critics and readers have been deliriously positive. A few have mentioned that the murder mystery itself leaves something to be desired. But the mystery of the mind has surely been solved. No one mentions that Alzheimer’s has no known cause or cure. I wonder what Jennifer would think about that.