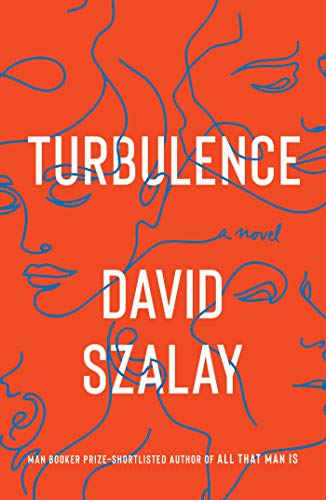 “David Szalay’s art accomplishes what arithmetic can’t: The whole adds up to more than its individual components, and in sum his Turbulence is a tour de force.”

In 1897, Arthur Schnitzler wrote a play, “La Ronde” that had its debut performance in 1912 and has been much copied—adapted, re-imagined, reconfigured—since. The play’s structure is episodic, with pairs of lovers pairing off, then one of the two acquiring another partner until the story comes full circle and the last character meets the first. Set in Vienna in the 1890s, it moves from “The Whore and the Soldier” to “The Soldier and the Parlor Maid,” then “The Parlor Maid and the Young Gentleman” until, in the tenth and final episode, we meet “The Count and (Again) the Whore.” It’s a way of telling self-contained stories in interconnected sequence, and many set-pieces and movies have followed Schnitzler’s form.

The astonishing new novel by David Szalay also borrows from that structure though not the play’s exclusive focus on sexuality. There are quite a few “couplings” between the several couples here, but much of the action has to do with other kinds of desire: to talk to a daughter, to help a needy sister, to keep a marriage stable or a garden irrigated.

There are wealthy travelers, lounging in first-class cabins; and there are those who have to beg permission for a bare-bones flight. Szalay’s last novel, All That Man Is, was short-listed for the Man Booker Prize, and this new book also attempts to have it “all.” Indeed, his 12 episodes cover more or less the entire range of human interaction and, as its title suggests, Turbulence.

A brief book, Turbulence nonetheless circles the globe. Each of the 12 chapters is introduced by airport codes, a flight from London-Gatwick to Madrid (LGW-MAD), a flight from Madrid to Dakar (MAD-DSS), a flight from Dakar to Sào Paolo (DSS-GRU), and so on around the world. There are chapters (DEL-COK, COK-DOH, DOH-BUD) that traffic in unfamiliar and out of the way destinations. In the final episode we travel back to London from Budapest (BUD-LGW), and the circle closes: We meet the daughter of the man whose mother we met at book’s start. Its last encounter, one of the few affirmative moments in the narrative, ends with the father saying, “I’m happy you’re here,” and “‘That’s okay,’ she said.”

For much of the novel, however, the mood is not “okay.” The literal turbulence of the first flight mirrors the sensibility of its characters. The mother fears her son is dying of prostate cancer and her next-seat companion spills a cola all over his good suit. Returned to Dakar, he learns—at episode’s end—that his beloved son has been run over by a taxi and been killed. The passenger in that taxi works as an air-freight cargo pilot and, troubled by the accident, remembers his dead sister, who would have been 33. The 33-year-old woman with whom he sleeps that night gets on a plane to Toronto (GRU-YYZ) in order to interview a novelist who leaves her in the lurch because of a family emergency. The famous writer flies to Seattle (YYZ-SEA) and at the airport meets a fan whose mother is returning to Honk Kong.

All through the book this sort of elliptical meeting-and-parting continues. The novel appears to have originated as a series of brief radio plays for the BBC, and the “serial” aspect of tale-telling is foregrounded here.

We read of an affair between the woman from Hong Kong and a doctor of Indian origin; we learn of that doctor’s trouble with his brother when they meet for a game of golf in Vietnam; we learn of the brother’s indebtedness and scam with his father’s ATM cards; we learn that the old man’s maid catches on to the scheme and uses her knowledge to gain permission to visit her sister in Kochi.

It’s a dizzying performance—12 such tableaux of roughly 10 pages apiece—in which a world is both described and circumscribed. Always, the relations are strained, always the hunt for stability is foredoomed by “turbulence,” and each of the novel’s personae feels at risk.

Yet somehow the mood of the book is cool, dispassionate, as though the writer looks down on human scenery from an airplane’s height. “She woke to the dim stillness of the cabin. This had already happened several times, and each time what she had experienced was less like sleep than like an odd discontinuity in her presence in the world.”

Or, “The captain, sitting next to him, pointed at the nearly dark and disappearing ocean and said something. There was still a faint light where they were, eleven kilometers up. Werner was thinking that it was night already in Dakar. In Frankfurt it was already night. ‘This is where it went down,’ the captain was saying.

“‘What?” Werner asked, his thoughts elsewhere.

Szalay’s prose is lapidary and his range impressive. He seems equally at home describing a wealthy businessman in the back of a chauffeur-driven limousine and a gardener in a hot shack who never once has entered his employer’s house. He describes homosexual yearnings and extramarital affairs; he writes of a husband who leaves his wife because their child is born blind. The slums of Delhi, the neighborhood of Notting Hill Gate, and the Song Be Golf Resort outside “the city he still thought of as Saigon” are equally vivid, and the variety of characters and action would do any novelist proud. What links the dozen episodes is a kind of weary knowingness, a birds’-eye view (or, more properly, a pilot’s vision) of what transpires below.

It’s inescapably the case that each of these stories are truncated, and the reader cannot linger or savor encounters at length. At times the structure feels merely schematic, and it would have been welcome to pause or flesh out the characters. In Euclidean geometry, the whole is always equal to the sum of the parts. But David Szalay’s art accomplishes what arithmetic can’t: The whole adds up to more than its individual components, and in sum his Turbulence is a tour de force.