Tune In Tokyo: The Gaijin Diaries 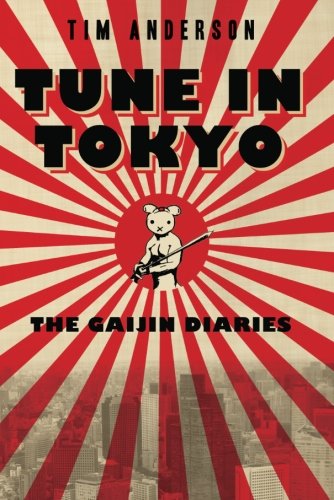 “To have been a piece of literature worthy of resurrection, Tune In Tokyo would have perhaps benefited had the author been able to pierce through his own clambering humor and, from time to time worked more descriptively to give his reader a sense of the place, the time, the culture and the enduring beauty of Japan.”

Apparently no longer satisfied with having pulled off the magic trick of rendering your local bookstore both invisible and irrelevant, Amazon now seems interested in greater acts of prestidigitation by entering the world of publishing itself.

And so we have a new Amazon series of publications in which “AmazonEncore identifies exceptional yet overlooked books and works with the authors to introduce or reintroduce their books to readers.”

Whether Amazon’s latest efforts will culminate in large sections of midtown Manhattan turning invisible and intangible remains to be seen. But among the “overlooked and yet exceptional,” apparently, is Tune In Tokyo: The Gaijin Diaries by Tim Anderson, a book that was published the first time around by the obscure Wayward Mammal Publishing Company in June of 2010. AmazonEncore has just made the book available again.

While not particularly exceptional in either the story it has to tell or the way in which it is told, Tune In Tokyo (a misleading title that perhaps suggests more Tokyo Rose than the tale that will be told) is the story of a young-ish American man, Tim Anderson, who moves to Japan on more or less a whim. Or as the author himself deals with the subject early on in his book:

“Staring out the window at the electric Tokyo sky and the Sapporo beer advertisement on a neighboring building—an ad featuring two be-suited Japanese tough guys looking directly at me and asking the pivotal question in English, ‘Like Beer?’—I come up with a question of my own.

“Why would a college graduate with such impeccable credentials as a BA in English, diabetes, credit card debt, Roman nose, and a fierce and unstoppable homosexuality want to leave the boundless opportunities available to him in the USA (temping, waiting tables, getting shot by high school students) for a tiny, overcrowded island heaving with clever, sensibly proportioned people who make him look fat?”

Reading this question, the reader thinks it spot-on and answers with a question of his own, “Why indeed?”

And then begins to read in earnest, only to find that, in this light and pleasant enough hodgepodge tattle-telling of Asian quirks, including passions for Karaoke, pink hair, and Yaoi Manga—think graphic romance novels that the author likens to all male versions of “The Young and the Restless” printed up not for an audience of homosexuals, but, instead, for teenage girls—Tim Anderson at no point troubles himself to answer his own central question (indeed, the book is pretty light when it comes to any sort of who, what, when, where, why information), save this, the subtitle he gives to his own prologue:

On the other end of his two-year sojourn to the Pacific, he gives the following as a partial reason for needing to return home, something the Gaijins (foreigners) call “Japanger:”

“juh-pan’-gur, n.: The overwhelming feeling of frustration and displeasure, usually of Western people living in Japan, resulting from doing daily battle with the sometimes maddening idiosyncrasies and inscrutable behaviors of the Japanese people.”

So. On the one side of the ocean is boredom, the other, frustration. But in the middle, there is a bit of bliss, which is the subject of our tale, a traditional fish-out-of-water story.

In Tune In Tokyo: The Gaijin Diaries, our hero, who, as one of his three part-time jobs in North Carolina is for an international language school, in which, although he is not versed in Japanese, he finds a job teaching English to Japanese businessmen who, although they already have a smattering of our language, feel the need to become fully conversant in it. Which leads to a job in which Anderson corrects grammar and idiom and gives his students a cultural understanding of not only the vagaries of the American language, but also of the behavior of the American people themselves.

This job leads to an opportunity to perform the same function in Tokyo, an opportunity that Anderson seizes, although he has just had the good fortune to meet his life partner Jimmy, whose visit to Tokyo months later gives the book its funniest and most poignant chapter. (Anderson gives that chapter the smirky title “Jim-zilla Attacks!”—a quip that, unfortunately, is rather typical of the broad sort of humor to be found throughout what could have been a sweet and harmless read had the author not apparently thought that, like a Catskill comic of old, he was to be paid by the joke.)

Yet Jimmy brings out the best in our author:

“Tokyo is a hard sell for Jimmy. At least on the phone. He’s jealous of her. To him she’s nothing more than a home-wrecker. A harlot, a vixen, a temptress in a foreign land with her restless arms all over his boyfriend. He knows that every day I walking her streets, slurping her noodles, shoving my big feet into her tiny bathroom slippers, pushing myself onto her trains, sliding in and out and in and out of her underground tunnels. And, yes, I am doing all of that. But when I get Jimmy over here, he’ll do it too. And he’ll love it. He’ll fall for her just like I have.

“Oh, yes, it will be an epic, sexy disgusting ménage a trois. Two charming men. One hot city.”

In the course of his love affair with that “one hot city,” Anderson endures meals of tonkotsu ramen and moldy vodka, myriad moody (or worse) roommates—including Ron, the traditional drunken, abusive “ugly American” and Ewan, “a thirty-nine-year-old Australian introvert, possibly the only introvert Australia has ever produced and exported”—expensive and hard-to-find gay pornography (a stand-in for Jimmy?), that, our author finds out to his horror, is censored by government officials, who black out all the magazine photographs, and tutoring sessions with wealthy Japanese children whose parents don’t want them to lose their knowledge of English:

“Since they have just returned from spending three years in the U.S., having an American tutor isn’t so exciting for them. In fact, I can say with complete certainty that I am of absolutely no interest to them whatsoever. For three years, they went to school with Americans, lived next to us, ate our food, watched our television, played with our toys, read our books and magazines, and wore our clothes. They went to our ugly strip malls and WalMarts and realized how fat we actually are. To them I am not an entrancing enigma, a handsome stranger from the West. I am just another white guy. So when I try to get them to ask me questions about myself during their respective lessons, a warm-up technique that never fails to work with students who haven’t spent much time away from Japan, it falls flat.

To have been a piece of literature worthy of resurrection, Tune In Tokyo would have perhaps benefited had the author been able to pierce through his own clambering humor and, from time to time worked more descriptively to give his reader a sense of the place, the time, the culture and the enduring beauty of Japan. In rendering it in a series of easy one-liners, he reminds the reader of the critic who is too lazy to thoughtfully grasp the delicate underpinnings of a literary work and, instead, merely dismisses it with a sniff.

But when faced with a work like this, so filled to the brim with potential never reached, the need to sniff grows as overwhelming as it does in a field of goldenrods blooming in the bright September sun.