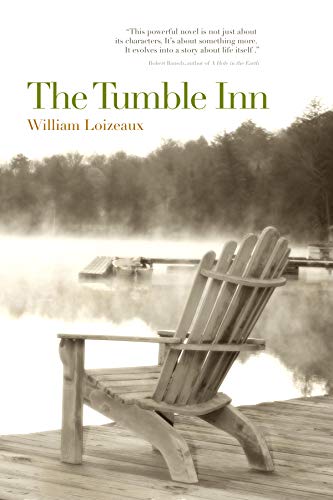 “The ‘everyone’ characters in the book help the central characters weather their personal storms, making the novel heartwarming and inspiring. . . . So if you open this novel expecting Adventures in Innkeeping, be prepared for something deeper as you go along.”

Like many escape-to-the-country stories, this one is heartfelt and eloquently written—so convincing, in fact, that it reads like a memoir instead of a novel. Thus one expects the tale of Jaded Schoolteachers Who Move from the City to the Boonies to be a warm adventure at the aptly named Tumble Inn.

And it begins that way, with Mark and Fran taking the sort of blind leap into the unknown that makes for life-changing drama. (“Fran had a way of doing this sometimes, pushing us forward faster than I could dig in my heels.”)

Totally unqualified as innkeepers, apart from willingness to try, the couple’s first year is a comedy of errors. This includes some laugh-out-loud moments, such as a sex scene featuring black flies.

But, being a literary novel, it takes a tragic turn. The story shifts to a chronicle of grief recovery, and the painful challenge of learning how to reinvent one’s life. Here the Tumble Inn proves itself as a foundation to build upon in more ways than one.

Told from Mark’s point of view, the story varies in scope and pace between close-up and zoom-back, covering life at the inn along with Mark and Fran’s attempts to have a child, and what unravels from that over time. The narrative is so well written that it might best be read twice, first for story, then again just to savor the prose.

Readers familiar with the Adirondack region of upstate New York will recognize the details of place and feel right at home, nodding. Folks who’ve never been there will come to understand just how different the environment and culture are from the metrolands only a few hours south.

Loizeaux captures the inhabitants’ self-sufficient and generous spirit as well as the area’s imposing facts of life, like, isolation and weather. “But winters here have a way of eroding differences. If you’ve ever seen people picking their way through a driving snowstorm, you’ll know what I mean. Bundled up in a facemask, down parka, snow pants, boots, and mittens the size of boxing gloves, all your peculiarity goes out the window. Everyone looks about the same. Everyone’s concerns are about the same. Everyone just wants to get home and warm. Everyone leans into the wind.”

The “everyone” characters in the book help the central characters weather their personal storms, making the novel heartwarming and inspiring. As the author himself says: “Love and loss—love in the face of loss—seem to be at the center of my books. I don’t necessarily intend to write about these things, but they are inevitably what I come around to, and have come around to again in The Tumble Inn.”

So if you open this novel expecting Adventures in Innkeeping, be prepared for something deeper as you go along.