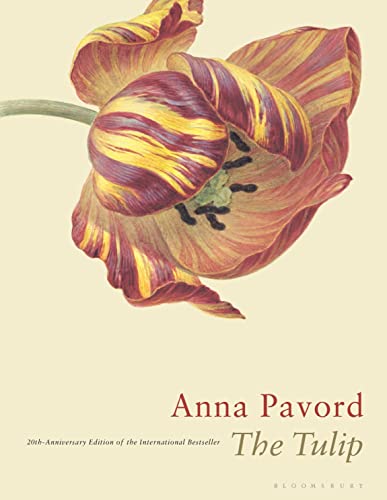 “For those fascinated by the flower, The Tulip, either the original or the 20th Anniversary edition, is a must-have book to add to your library.”

When Anna Pavord’s book The Tulip: The Story of a Flower That Has Made Men Mad was first published in 1999, it was received with great acclaim. Kirkus review described the book as, “A disarming, captivating history of the tulip . . . This floral portrait is alive with wonder . . .” In Smithsonian magazine, John R. Alden wrote, “no reader of Pavord will treat them [tulips] dismissively again.” Publishers Weekly wrote, “this book will give readers a panoramic eyeful of culture, aesthetics, politics and economics—in short, the spectrum of human endeavor as revealed in the passage of the tulip through history.”

Enhancing Pavord’s well-written tales of the tulip, the book was beautiful, replete with historic botanical illustrations and portraits of the key players in the tulip’s history. It became an international bestseller. To celebrate the 20th anniversary of this now-classic volume, Bloomsbury Publishing has issued a new edition.

The latest edition sports a new cover design, and the original descriptive title The Tulip: The Story of a Flower That Has Made Men Mad has been reduced to simply The Tulip.

Other than those changes, the differences between the two volumes are small. Anna Pavord wrote a preface, which was lacking in the original book. In it we learn that her personal tulipmania began when she saw the tulip “Gudoshnik” in bloom. An award winner from the 1950s with a name that means painter in Russian, Pavord waxes lyrical when she describes it. “Here was a jewel flower, a flower of infinite variety a flower to study for the complexity of its markings: the color of the base, the flames that licked up the insides of the petals, the beautiful sheen, like the most expensive satin, on the outside of the bloom, the delicate stamens, the colour of the pollen.”

For the new edition, Pavord also revised the listing of best tulip varieties to include introductions that have come to market since 1999, and updated the tulip species list to reflect changing nomenclature as taxonomists use new scientific techniques, including gene mapping, to more accurately classify the plants.

Among the new entries to the list is “Boa Vista,’’ a double late bloomer introduced in 2011 that has artichoke-like petals that are green with touches of rose-pink at the tips. This botanical wonder will last up to three weeks in a vase. “Dream Torch,” also introduced in 2011, is another double flower Pavord added. It wows with purple petals that are softly edged in white.

“Danceline,” introduced in 2006, has large, puffy, peony-like flowers that open ivory with a yellow glow. The inner petals are accented with variable, vertical raspberry lines, the outer with pale green chevrons.

“Exotic Emperor,” a Fosteriana tulip registered in 2001 redefines what we can expect a tulip to look like. Pavord writes that it is a, “Superbly dramatic tulip, almost double, with an enormously wide flower—14 cm across when fully open—clasped on the outside by strange green-striped narrow claws, like the calyx of a rose. A most unusual formation, instantly eye-catching as it is a completely new configuration.”

Reading about these luscious new introductions makes one want to rush out and buy them all, fomenting a 21st century wave of tulipmania.

Physically the book is slightly different. The pages in the new edition are shorter by about ¼ inch and a hair narrower than the original, and the paper stock is not quite as heavy, making the new volume about ¼ inch less thick. As a result, most of the illustrated plates are smaller in new version.  Generally the details in the larger images in the 1999 edition are easier to see, especially in old prints and tapestries that are intricately drawn.

One of a few exceptions in the trend in the new volume to shrink the plates is the portrait of Charles de ’Ecluse (aka Carolus Clusius), a 16th-century doctor and pioneering botanist who is credited with introducing the tulip to Western Europe and the Netherlands in the late 16th century. He was perhaps the most influential of all the scientific horticulturists of his time.

Twenty years ago the publishers placed a reproduction of Clusius’s signature beneath his portrait. In the new edition the editors eliminated the signature, using the new-found space to enlarge his portrait on the page. It’s a trivial change, but it was quite interesting to see the handwriting of a man who lived more than 400 years ago.

Another insignificant difference is in Chapter Three: “Early British Growers.” For the revised edition, the editors substituted a photograph of a set of four, “writtle-work engraved plates by Daniel Burton of London, c1700,” replacing it with a photograph of a single English pewter plate c1662. It’s another example of the minor changes made for the new edition that don’t affect the overall substance of the book.

For those fascinated by the flower that, as Pavord writes, “has carried more political, social, economic, religious, intellectual and cultural baggage than any other on earth," The Tulip, either the original or the 20th Anniversary edition, is a must-have book to add to your library.