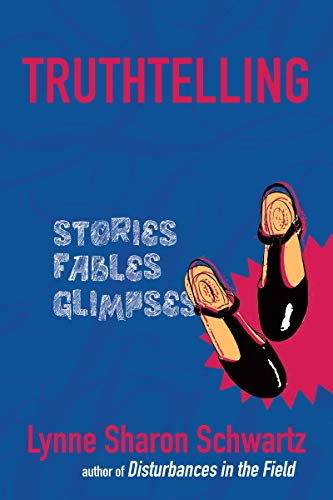 “Word by word, Schwartz chooses her language with a surgeon’s precision. Her craftsmanship is a joy to behold.”

In “But I Digress . . .” one of the many splendid short stories in the new collection Truthtelling: Stories, Fables, Glimpses by award-winning author Lynne Sharon Schwartz, the narrator muses about Maimonides’s Guide for the Perplexed:

“I still haven’t read it, only leafed through it, but I do like having it on my shelf; it reminds me of Uncle Dave and I like to imagine I might read it one day. I think I can count on remaining perplexed, about my father and many other things.”

This passage exemplifies not only in form but also in content the elegant hesitancies of Schwartz’s work. Each clause twists and turns as the sentences snake along, adding new layers of meaning, nuance, and uncertainty.

Likewise, sentence by sentence, paragraph by paragraph, the characters in the various stories of Truthtelling slowly reveal their troubled insides, and in the process Schwartz reminds readers of the perplexing complexities that underlie our relatively brief time on this side of the grave.

Several stories focus on the evolution of romantic relationships over time. For example in the story “Truthtelling,” which gives the book its title, an aging couple make a game of confessing to their various infidelities, an exercise that leads to frustratingly little insight for both players. Tellingly the story’s last line is a question: “Why not?”

Similarly, in “A Taste of Dust,” a woman named Violet visits her former husband, now remarried to Cindy, “once the secret girlfriend and now the anointed wife.” During the visit, Violet engages in an inevitable mental exercise of compare and contrast that leaves the story’s heroine dazed and confused:

“She’d wasted hours pondering why she’d become unloved and still didn’t know; maybe no one ever did.”

This lack of knowing runs all throughout the book. In “I Want My Car,” a man lends his beloved car to his ex-wife who won’t return it, and he can’t quite figure out why he’s so reluctant to force her to give it back. In “Am I a Thief” and “An Impromptu Visit,” the main characters steal objects that don’t belong to them, never quite understanding why.

“Just touching it, wrapped in the nightgown, makes me feel so awful,” says the protagonist of “Visit.” “So ashamed. And as baffled as my victim.”

In the age of Twitter and cable punditry, when easy-to-digest overly simplified messaging is often prized over nuance, Schwartz’s stories are a healthy reminder that life is a dicey business: confusing, mysterious, and ending senselessly in death.

At the same time, this atmosphere of doubt is periodically punctuated by unexpected gestures of kindness. A young woman devotes herself to the care of an aging Italian husband in “Career Choice.” Two grieving parents attempt to comfort each other in light of their daughter’s brush with breast cancer in “The Strong One.” And the owner of a dress shop looks after an eccentric elderly neighbor in “The Golden Rule.”

It’s a tribute to the powers of Schwartz’s prose that despite their weighty themes, these stories have a light, agile feel, perhaps because of the author’s sly, witty humor. Her sentences consistently surprise with a pregnant, suggestive turn of phrase, right up to their often pitch-perfect last lines that don’t so much close the stories as they open new possibilities for further thought. Word by word, Schwartz chooses her language with a surgeon’s precision. Her craftsmanship is a joy to behold.

As is generally the case with collections, not every story lands, and in this book, that’s often the case with the more whimsical and abstract pieces, which feel insubstantial, sometimes twee. The subtitle of the collection is “Stories, Fables, Glimpses,” and perhaps this could have been a tighter book with fewer fables and glimpses.

Still, such quibbling is a small price to pay for such a strong body of work, startling in equal measure for its magnificent prose as for its wise observations on the strange turns human lives can take, especially toward their ends.

Aaron Hamburger's most recent book is Nirvana Is Here: A Novel, winner of a Foreword Indie Book Award Bronze Medal for LGBTQ Fiction. His writing has appeared in The New York Times, The Washington Post, The Chicago Tribune, The Village Voice, Boulevard, Poets & Writers, and other publications.