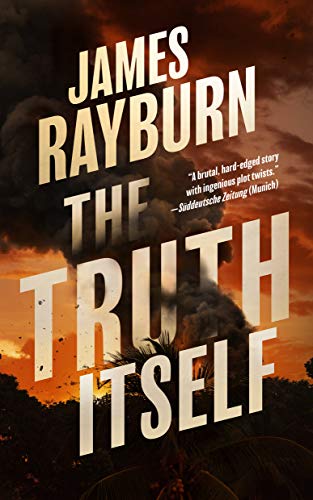 What happens to a CIA agent who turns whistleblower on her own colleagues? Kate Smith, hiding in Vermont with her young daughter Suzie, knows the price: an international-level death threat on her head and her daughter’s, and trying to live an unassuming single mom’s life while her daughter goes to school in an ordinary small town. Way, way under the radar.

Braced for revenge from the man whose power she’d diminished by “squealing,” Kate’s always been ready to run again. Spurred to escape by an accident instead—an invasion of her daughter’s elementary school by a pair of teenage shooters, which Kate takes action to stop—she’s suddenly made visible to Lucien Benway, who’s ready track her down. Oh, she’s still got those skills from being an agent in the field, as she’s just shown with the invading teens:

“Then she was dropping the Bushmaster and reaching in for her daughter, hauling her out the window and finding a crazy strength that allowed her to hold her child close as she sprinted through the snow, driving her legs, lifting her knees, feeling the burn of the cold in her lungs. She raced for her car, hearing the wail of the sirens bearing down on them, knowing she had no more than a minute to get to the Jeep and get away.”

Yes, Kate’s strong and driven, but in James Rayburn’s spy thriller, The Truth Itself, it’s clear that those skills aren’t enough to carve out a permanent escape from Benway and his associates. Let’s face it, they have the same skills, and they’re not subject to international pursuit. So Kate’s effort to track down a famous spy-arena “fixer” of the past makes perfect sense: Only someone like Harry Hook, now hiding from disgrace in a tropical paradise, may be able to end Kate’s life of running and ensure that Suzie can grown up in safety.

Rayburn sets up the book as a race against time, Kate and her team versus Benway and his. The highly effective page-turning speaks to Rayburn’s earlier career as a South African filmmaker (under the name Roger Smith; Rayburn is a pen name), which he followed first with writing crime fiction set in Cape Town. His leap to spy fiction may be unexpected, but his very public Twitter feed shows attachment to the classic writers of the field like Le Carré and Graham Greene. Although the espionage plot twists in The Truth Itself aren’t unusual ones, the force of character that Kate Swift provides gives a new notion of what a woman can accomplish as an agent—and a mom.

Most pressing of all is Kate’s determination to protect her daughter. As she prepares to leave yet another set of allies, to try to get ahead of the team chasing her, she faces her daughter’s pressing question of “why” the latest ally, already part of their family structure, can’t go with them:

“Kate could have said: because I want to get as far away from him as I can. For his own safety.

The child had tears in her eyes. ‘I don’t want to go. As soon as I meet people I like you take me away from them.’”

And that’s the heart of the quandary. Will Kate ever be able to let her daughter bond to people, and in fact, will it ever be safe for Kate to love again? Perhaps only the gifted but worn-out fixer, Harry Hook, could truthfully answer that.

Often violent but not particularly gruesome, The Truth Itself is a classic-style spy and escape adventure. It’s a good read, with engaging characters, and the final scene hints at a possible sequel in the works. That would be excellent news.