The Truth at the Heart of the Lie: How the Catholic Church Lost Its Soul 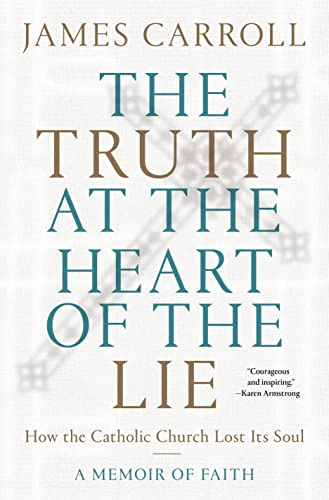 Early on in The Truth at the Heart of the Lie, former Catholic priest James Carroll announces three themes or stories he will tell. While these three are thought-provoking and notable in themselves, Carroll’s most important contribution is articulated primarily in the final chapters.

This book is first of all a memoir of Carroll’s faith journey. From early childhood and throughout his life Carroll has enjoyed a personal sense of the felt presence of Jesus. This seems to be what has kept him in the faith despite many challenges. These include an early ambivalence about his religious calling and a particularly traumatic experience that caused him to leave the priesthood after just five years. As a columnist for The Boston Globe at the time that paper’s Spotlight team broke the Church’s sexual abuse scandal, Carroll was deeply saddened by the refusal of the Church magisterium to accept responsibility for the horrors to which so many young people had been subjected. Further disappointment with the institutional Church and her all too human representatives have further challenged Carroll’s faith throughout his life.

To drive home his disillusionment with the Catholic religion as an institution Carroll delves into church history as his second theme. Laying particularly harsh but perhaps well-deserved accusations against Saint Augustine of Hippo for initiating the Church’s ages-long and trenches-deep obsession with sex back in the fourth century, he stops just short of blaming Augustine for the various priest sex abuse scandals that have emerged in recent decades.

Carroll points another accusatory finger at St. Anselm for his CE 1098 treatise Cur Deus Homo, which forever revised the Christian image of God. Apparently, in the earliest days of Christianity, God had been seen as a God of love. But “Anselm argued that the obedient death of innocent Jesus was the ransom required by God the Father as the price of redemption of sinful humanity . . . [this] assertion overturned a thousand years of Christian understanding,” turning the Christian God into a “legalistic fiend.” Carroll mourns the departure, as the Church solidified into a rigid, hierarchical, rule-bound institution throughout the Middle Ages from the more open-ended, perhaps more mystical faith centered around a God of love that had prevailed before then.

Carroll blames such ills as these and those that followed on a concept called clericalism. Just as racism and sexism claim to justify certain kinds of people considering themselves superior to others, clericalism justifies clerics feeling superior to (and therefore feeling free to abuse their power and impose injustices against) lay people.

The evils of the clericalism rampant in the Catholic Church make up Carroll’s third theme. These horrors were brought to a head most recently by the Church’s lax and irresponsible reaction to the sexual abuses perpetrated by some of her priests. But clericalism has caused, tolerated, and refused responsibility for many other kinds of sin against children, minorities, women, and even laymen down through the ages. “Clericalism is both the root cause and the ongoing enabler of the present Catholic catastrophe . . . [because it] claims nothing less than divine authority for itself.”

Only in the final chapters does the author come clean about the type of spiritual focus he found his way to after all the disappointments. Toward the end of the book, Carroll begins calling himself a “Secular-minded Christian.” In the light of scientific discoveries enjoyed in our current age he says literal belief in supposedly unchanging and unchangeable traditional doctrines is unsatisfying at best. “Science has taught us that intellectual integrity is a matter of morality. There is a morality to belief, too. It is immoral to believe irrationally.”

The culture of fear that early Fathers must have felt necessary to keep Church followers in line works poorly in this scientific age. “The Pope’s role as the keeper of the keys of hell . . . [and] the dread of damnation is [now] mostly gone. . . . what humans long for is not salvation but meaning.” Carroll feels that Pope Francis had a good chance at ushering Catholics toward a more personal, and more evolved kind of faith, but laments that Francis is held back by the chains of clericalism and is therefore unlikely to pull this off.

While not listed as one of Carroll’s themes, the evolution of his spiritual stance could have been developed as one of the most important points in this work. A faith journey through specific stages that may vary greatly in the details, but share commonality in the general trajectory, has been described by scholars from various disciplines and spiritual giants from many faith traditions. The path to spiritual maturity takes a person beyond the literal beliefs taught to them by their tribe, through a period of struggle and doubt as worldly encounters clash with those beliefs, imposing suspicion and disillusionment. Some people eventually see their way through to a more inner-focused, more felt sense of connection to Spirit that renders reliance on the religious institution far less relevant. They may refer to that Spirit as God or Jesus. But they may just as well call it the Ground of Being, or Oneness, or Source or the Universal Consciousness.

As science disproves traditional religious doctrines such as the Genesis story and the existence of heaven and hell as actual geographic locations, literal belief becomes increasingly implausible. Had Carroll developed the story of his faith journey more fully, he could have provided a great service to his readers. A roadmap beyond belief toward a more personal, more inner dwelling spirituality is something that must be offered to people if any form of religion is to survive into the coming age.

Carroll ends this work with a heartfelt manifesto on his vision for a future in which Catholicism can survive. But the Catholic Church is far from the only institution that will have to overcome clericalism—or its equivalents: racism, sexism, nationalism, and exclusivist political ideologies—to remain relevant as information becomes more difficult to suppress and awareness of our global connections expands.