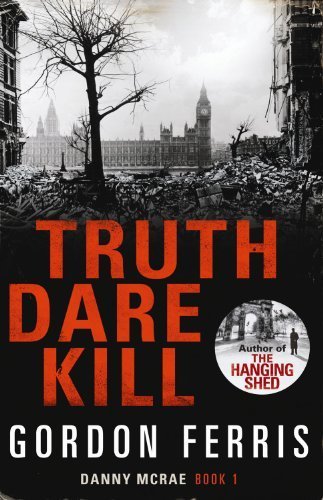 “Taut, atmospherically gritty and cleverly constructed, Truth Dare Kill is a fascinating depiction of a post-war London, capturing accurately the ambiance of that terrible and morally ambiguous time. . . . a gripping, fast-paced read and will undoubtedly be added to the bestseller list, confirming Mr. Ferris as a terrific storyteller and writer.”

Gordon Ferris’ bestselling The Hanging Shed introduced us to ex-policeman Douglas Brodie, a character straight out of a John Buchan novel, winning high praise from critics and fans on both sides of the Atlantic. The Hanging Shed became a phenomenal seller on Kindle, spending many weeks at the number one spot.

In his latest thriller, Truth Dare Kill, he introduces us to Danny McRae, a private investigator suffering from occasional memory lapses caused by horrendous wartime wounds to his head. McRae is no Philip Marlowe but what else is a demobbed SOE agent to do now that the war is over and the world struggles back to normality? Not that anything will be normal for Danny until he fills the void in his memory, which swallowed up an entire mission to France.

But first he has a case to investigate. Elegant, upper class Kate Graveney has made a shocking admission, and Danny needs to get her off the hook. She claims she and her lover were in a flat when a bomb went off. Her lover was killed, and she fears she may have been involved, somehow, in his death. Danny sets off on a hunt through bomb-ravaged London, the bleak cityscape mirroring the ruins of his mind.

The head injury that gouged his memory, also gives him blackouts: hours, sometimes days, are a complete blank. Newspaper headlines about a brutal killer stalking London’s red light district make him uneasy, and a visit from an old adversary awakens dark misgivings. He is assaulted by Inspector Wilson, a mere thug in policeman’s uniform, and befriended by the madam of a cathouse. He is torn between his upper class client and the shop girl who believes in him. The odds stack up against Danny and soon he fears for his life. The only escape is through that gap in his memory.

“I stopped typing and listened to the sound of high heels heading my way. They clipped up each rise on the toes, then clacked across the landings, heel first: Morse code for “this could be your lucky day.” But who needed my services on New Year’s Eve? I hoped they wouldn’t stop at any of the two lower floors. There was a long moment’s hesitation on the second; I thought I’d lost them to the chain-smoking old woman who lives below. Then they came on.

I stopped pretending I was busy. The only person I was fooling was me. For the past couple of hours I’d been stabbing the keys and banging the return as if I hated the battered Imperial. I’d twice reached into my drawer and fingered the neck of the bottle like a lover. I’d twice closed the drawer without taking a swig. If I started I’d never see midnight: a prospect that had grown more tempting by the minute.

“The stairwell is visible through my open door. Her hat appeared first, then she climbed round out of sight and up to the top landing. The tap-dance continued until she stood in the doorway. Her slim shadow flung itself across the lino towards my desk. She was hesitant, as though she’d never done this sort of thing before.

“Mr McRae?” The vowels matched the classy outfit, soft but beautifully shaped. I wanted to hear her say it again.

“Danny McRae. Can I help you?”

Taut, atmospherically gritty and cleverly constructed, Truth Dare Kill is a fascinating depiction of a post-war London, capturing accurately the ambiance of that terrible and morally ambiguous time. Danny McRae is a terrific warts-and-all character, refreshingly original from all the infallible problem-solvers we normally encounter in such tales of murder and intrigue.

It’s easy to understand why Mr. Ferris has more books planned for him in the future. Truth Dare Kill is a gripping, fast-paced read and will undoubtedly be added to the bestseller list, confirming Mr. Ferris as a terrific storyteller and writer. With the dark night quickly approaching, this is the perfect book at bedtime.