The Truth About Delilah Blue: A Novel 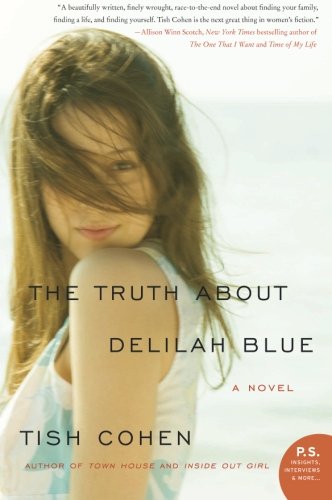 “. . . that was all hindsight, and hindsight wasn’t just twenty-twenty.
Hindsight wrapped everything in sunshine.   It got in your eyes and
made a positive outcome appear inevitable all along.   Made any
impulsive move appear outlandish.”
—Tish Cohen“It’s a long day living in Reseda/
There’s a freeway running through the yard . . .”
—Tom Petty and Jeff Lynne, “Free Falling”

It’s only June, but experienced author Tish Cohen has produced what is likely to be one of the best works of fiction of 2010.   The Truth About Delilah Blue presents the compelling story of what happened to a girl on a milk carton.   Delilah is eight, living in Toronto with her parents, when they decide to separate and engage in a hellish custody fight.   Delilah’s mother Elisabeth is a flirty and flighty almost-artist who has married below her ambitions in life.   Her father Victor is a very serious seller of medical supplies, a man who sees Delilah as his one and only accomplishment in life.

Victor’s attorney tells him that things do not look good in his battle to share custody of Delilah as he’s had a couple of slip-ups that make him appear to be a bad parent.   Victor cannot stand the thought of losing his most treasured possession and so he offers Delilah a trip to Disneyland—knowing that they will not return to Canada.   After the visit to the Magic Kingdom, he moves himself and Delilah to the outskirts of Los Angeles, where they assume new identities and lives.

Delilah, now 20, has ambitions of being an artist but she and Victor live in a crumbling abode and there’s little money.   There will be even less as Victor’s about to be fired from his job selling medical supplies.   Victor was a great salesman but he begins missing appointments with clients.   He refuses to see a doctor but, at just 53, appears to be facing the early onset of Alzheimer’s.

Delilah has grown thinking that her mother abandoned her rather than that her dad abducted her.   As we join the story, Elisabeth is about to find her long-lost-daughter and come face-to-face with Victor.   But Elisabeth is not alone in L.A., she now has another daughter, the grade-school age Kieran.   Kieran may be a child but she sees life through the eyes of a mature adult.   Her oddity is that she obsesses about missing children; keeping a collection of photos of the lost and abandoned (cut from milk cartons) in her bedroom.

“Kieran . . . becomes her own little parent, the exact opposite of her mother.
She takes no risks at all, unless it is to prove she’s worth risking everything for.
. . . Both girls lost out on childhood.   Elisabeth lived it for them.”

Cohen writes with seriousness and humor, pessimism and optimism.   Her style brings to mind a mix of Anne Lamott, Anna Quindlen, Jamie Ford, and John Burnham Schwartz.   She also occasionally takes on the laser-like focus of one of her favorite authors, Joan Didion.   Cohen’s great strength, as with all of these talented writers, is in creating characters that are believable.   In Delilah Blue we come across characters large and small, sane and less so.   Yet each and every one appears to be unique, individual, and well-rounded.

As a result, this novel of 448 pages reads like it is less than half of its length.   And Cohen has some surprises for us.   Victor may be suffering with the brain plaque brought on by Alzheimer’s but he’s still as cunning as a coyote.   He may find a way to get his way.   Elisabeth acts like a child compared to her daughters, but she comes to find her maturity.

“It’s a miracle.   Plain and simple.”  As for Delilah?   Delilah comes to see and accept what’s truly important about her life in her adopted home, the City of the Angels.   As she does so, her free falling comes to an end.