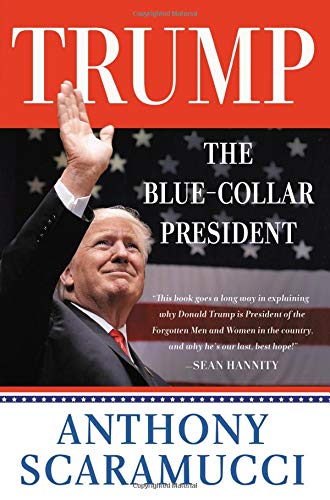 “what saves this book is that the Mooch [Anthony Scaramucci] comes off as an attractive character. There actually is more to him—much more—than his brief tenure at the White House. His journey to millionaire hedge fund manager from humble roots as the son of a blue-collar sand hog from Long Island does make compelling reading.”

President Trump goes through advisors and cabinet members seemingly on a weekly basis, so it’s anyone’s guess the number of books about Trump-world that will eventually come out. Case in point: Anthony Scaramucci’s account of his life and his 11 days as the White House Director of Communication under President Trump.

Scaramucci will be the first to tell you that, in less than two weeks, he went from being a respected Harvard Law School graduate and hedge fund financier to the punch line of tabloid headline writers and talk show hosts. He became “the Mooch” and it’s likely he’ll never live down that nickname or those 11 days.

His tenure ended in spectacular fashion when he had a now-infamous telephone call with a New Yorker reporter and forgot to mention that it was off the record. The writer Ryan Lizza wrote a piece that featured the Mooch’s takedown of Steve Bannon. Scaramucci was shocked. He writes that he thought he was just shooting the breeze with another Italian-American guy from Long Island.

So that’s about it for Scaramucci’s White House days, but what saves this book is that the Mooch comes off as an attractive character. There actually is more to him—much more—than his brief tenure. His journey to millionaire hedge fund manager from humble roots as the son of a blue-collar sand hog from Long Island does make compelling reading. The truth is that guys like “the Mooch” don’t often graduate from Harvard Law School.

As such, he argues persuasively that he is uniquely qualified to understand why Trump is so appealing to America’s rust belt and blue-collar workers. It’s not racism; it’s that Trump is speaking to their hearts, Scaramucci argues.

Scaramucci’s slow understanding of the upwardly mobile began before Harvard back when he entered Tufts University as a freshman. Immediately, he noticed the different attitude that prevailed, one so unlike his street on Long Island where everyone worked hard to become middle class and admired President Reagan.

As he writes: “Some professors railed against the corporate tax cuts Reagan had made in 1981, and they beat up on Wall Street every chance they could. Outside the classrooms, in the bars and residence halls, I was hearing similar pronouncements. Other students told me Ronald Reagan, who’d been a kind of hero to me and my parents in Port Washington, was a lunatic.”

It was the first of many shocks to come as Scaramucci climbed the ladder to become a member of the 1%. Along the way, he met his hero—New York real estate magnate Donald Trump and the two became friendly, which is why he was tapped years later for the White House Communications job.

It’s fascinating to him and to readers how he sometimes became the face of elite America, like the time he was given a what-for by President Obama for defending Wall Street in a televised Town Hall meeting.

The kid who wore his blue-collar on his sleeves could scarcely believe it but it prompted a moment of self-realization: “Screw you, I thought. I’d pulled myself up by the bootstraps and worked like a dog for everything I had. The truth was, however, that that’s exactly what I’d become.”

That moment allowed Scaramucci to look back and double down on his roots. And when Donald Trump finally ran for president, Scaramucci found that his friend, the millionaire from New York, understood the working man better than anyone else in politics.

Oddly enough, however, Scaramucci was committed to other Republican candidates. He began working for Gov. Scott Walker and, if he was knocked out, Scaramucci had promised Jeb Bush he’d work for his campaign.

But Trump wanted Scaramucci’s support. “Trump looked me straight in the eyes. ‘All right,’ he said, ‘After I kill Walker and I kill Jeb, you’re gonna come work for me?’”

He shook hands and said he would and did, until Chief of Staff John Kelly fired him after Scaramucci’s fatal interview with the New Yorker. Reading this book, one wishes he had lasted longer. We’ve all been deprived of a great character who would have made reading the daily reports about Trump a bit more fun.