True Raiders: The Untold Story of the 1909 Expedition to Find the Legendary Ark of the Covenant 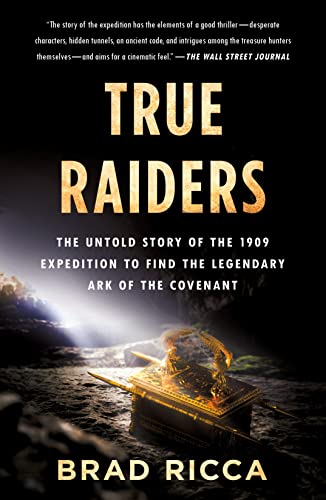 “True Raiders represents the best kind of rollicking adventure true-life tale, lively engaging prose based on what did happen, not wild speculation bordering on fantasy.”

True Raiders is a generational story of legends—archaeological, Biblical, and human, both ancient and relatively modern. Brad Ricca tells the story of how a syndicate of British aristocrats set out to find the Hebrew Ark of the Covenant in the ancient tunnels under Jerusalem in 1908–1911. They intended to sell this world’s greatest missing artifact for profit.

The project involved Finnish scholar Dr. Vaulter Juvelius, who claims to have decoded messages in the Bible’s book of Ezekiel, to locate the Ark within the tunnels. Robin Duff, Cyril Foley, Monty Parker, Clarence Wilson, and others set out to find this “treasure” in an expedition funded by a private subscription.

Explorer Sir Charles Warren had earned fame exploring these tunnels used “for water, for battle, and for worship, by different faiths” decades earlier. His historical finds went ignored, however, but his work in the tunnels became blueprints for treasure hunters and as gateways to Biblical fantasies.

This project involved fraud and politics from the beginning. To hide the intentions of the syndicate, the organizers pretended to travel to Jerusalem to build civic improvements. These “raiders” even invaded the Dome of the Rock, one of the most sacred sites on earth, and consequently created a local riot and an international incident.

“These unholy treasure hunters,” however, carefully negotiated with the Turkish rulers for permission to excavate. They worked with the American Colony and with Jewish leaders. Local archaeologist Father Louis-Hughes Vincent, a Dominican monk, gave this expedition lasting value for discovering historical information through his careful work and his book about what he witnessed during the expedition.

“The city was romantic and ancient . . . but it was also crowded, noisy, and exceedingly filthy.” Any excavations had to consider not only the concerns of the people who lived above the tunnels but also the sensibilities of the world’s three major religions that consider all of Jerusalem sacred. During the expedition’s work, a shooting of tourists occurred at the Dome of the Rock.

Monty Parker and his comrades slogged through mud, rubble, snow, and water without finding treasure by the popular definition. For Parker, the question that must have haunted him throughout is whether it was all nonsense to begin with. Nonetheless, he advanced the knowledge of the tunnels, even through a tunnel to Gehenna (Hell)!

This history touches on many subjects including the Astors, Jack the Ripper, Baron Rothschild, and Tutankhamen, among others. Appropriately, the author cryptically hides references in the text to the dialog in the Indiana Jones movies!

Ricca provides only limited historical background and sometimes not even an explanation for events and places mentioned such as the Jameson Raid and Gehenna. True Raiders really has no real introduction and draws no conclusions. This style gives the book immediacy and mystery. It is a game based on facts but where the reader knows only as little as the characters.

Does the author take too much artistic license with the dialogue? The “factions” (fictions passed off as facts) are only as these people at the time knew them. Ricca clearly identifies the characters throughout the narrative, a blessing compared to other writers who tend to only use the first name once for each individual and then leave the reader to try to sort out which pronoun refers to which person.

True Raiders represents the best kind of rollicking adventure true-life tale, lively, engaging prose based on what did happen, not wild speculation bordering on fantasy. Persons with experiences of this kind can relate to much of what the characters in this true story went through.

These aristocratic treasure hunters and their crypto- and psycho-crackpots included no archeologists, even by the definition of that pioneer science in 1908. They failed to see that whatever treasure by their definition might have been there that the Babylonians, Romans, Arabs, Knights Templar, locals, etc. surely found and took away long before. “There had been grave robbers and thieves . . . for centuries stealing from churches and tombs.” “All that history lost.”

The search for the Ark of the Covenant continues around the world today.

An important, unstated, greater lesson is that the true treasure is the unexpected and unimagined knowledge to uncover, not just loot. The Ark of the Covenant, if it exists or ever existed, will be found unexpectedly, likely by a professional archaeologist seeing something else.

True Raiders was painstakingly researched, despite its adventure-style prose. The book has annotations, illustrations, and a bibliography.