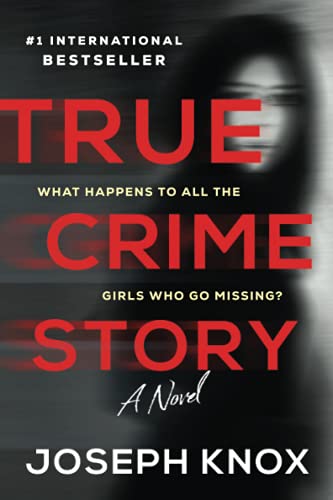 “Knox knows how to spin a great thriller, and in True Crime Story he reveals a new way to entangle the threads while ramping up risk and even a touch of horror. . . . utterly memorable, as a brave new form of drama for the pages.”

This startling stand-alone from British thriller writer Joseph Knox cuts new ground in both crime fiction and literary craft. The current passion for “true crime” investigations, whether on television (abundant shows and re-runs) or in books, has honed new reader skills: an insistence that every clue and voice be examined from multiple viewpoints, and a tolerance for ambiguity, as long as some villain, somewhere, gets fingered along the way.

In a fascinating twist to a college disappearance story, Knox offers close to 400 pages of interviews, personal insights, investigation details, even witness assessments, on the case of Zoe Nolan, age 19, a student at the University of Manchester and resident in a tower of student housing with some very peculiar construction. It looks like everything was working right in her life—success as a music major, popular with other students, even finding a serious boyfriend during her first term on campus.

The only thing that didn’t go the way she wanted, it seems, is that her twin sister Kimberley, got housed with her and two other girls. The sisters had meant to go into college separately. That didn’t happen.

And slowly, one message at a time, one crazy clue at a time, the rest of the problems emerge in True Crime Story, with Knox playing a role inside the book, and another investigator, Evelyn Mitchell, luring Knox into the wicked and increasingly twisted revelations.

Viewpoints include that of “brown boy in Manchester” Jai Mahmood, who compares Zoe’s life to an “epic HBO crime drama” and insists that what people say about Zoe is more about themselves: “Everyone who looked at her saw something different. Some of them saw what they wanted to, some of them saw their worst nightmare.” He fingers her twin, Kim, as an angry rival. Knox’s construction puts Kim’s response on the same page: “I am defined by losing Zoe, absolutely. I just think it’s more accurate to say I was always defined by her, even before she went missing.”

The sense of experimental fiction can make reading this thriller a bit perilous, like a modern-day Canterbury Tales or Ulysses being laid onto the pages. But Knox is clever, and each time there’s a moment when you might want to put the book down, he has another cliff-hanger emerge, another denial of someone’s earlier stance or evidence, another peril.

In a creepy way, it begins to look as though Zoe actually deserved something wrong happening. Or else maybe her twin did, and they got confused? Hold that thought, because it will come back to bite you, as many details in this unexpected mystery will do. Jai Mahmood, bitter from his own losses, nails it again: “Maybe Kim would have always found a reason to back away from taking that big chance in life. . . . Maybe we all could have been somebody, but I doubt it.”

A kidnapping, more twin confusion, more threats—Knox knows how to spin a great thriller, and in True Crime Story he reveals a new way to entangle the threads while ramping up risk and even a touch of horror. For most readers, this won’t be fun or entertaining reading. But it will be compelling, even revelatory. And utterly memorable, as a brave new form of drama for the pages.