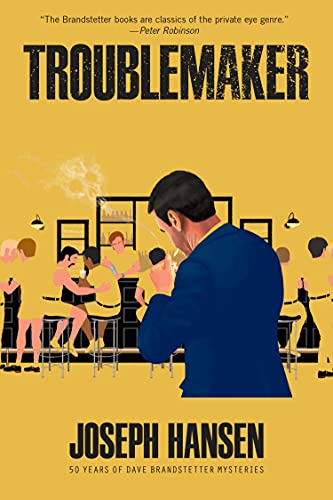 “Troublemaker makes a good bookend to the two preceding titles and shows Hansen’s willingness to paint the whole California gay scene of that moment, not just the kindest and sweetest portions.”

Moody posters with elegant private investigators and the women who fell for them used to adorn movie theaters in the 1970s. When Joseph Hansen’s third Dave Brandstetter crime novel Troublemaker was first published, in 1975, the book mostly fit that mood—except for the essential detail that Brandstetter’s love life, as well as his cases, involved loving other men.

Troublemaker begins with a tangle of passions: Horse rescuer Heather Wendell can’t help needing the life insurance payout that Brandstetter would approve, if he finds the gunshot death of Heather’s son fits the insurance policy his company has sold. But as a seasoned death investigator, he’s got questions. And Heather’s love for her son has mingled with her disgust over the young man’s passions that focus on sweet other men who tend to take all his money. Now Heather’s strapped for horse feed.

Which of course shouldn’t be a motive for the death of her own son, and Brandstetter doesn’t really think that’s what happened. But the son, Rick Wendell, was co-owner of a gay bar, and the further Dave Brandstetter probes, the more money-hungry or jealous men he discovers, with a few women as well. As long as Rick Wendell’s death wasn’t a suicide, Brandstetter’s employer will pay. Yet he can’t say confirm for sure until he nails the shooter.

The investigation tangles him with a wealthy architect, a competition among oceanside gay bars for “Mr. Marvelous” that involves many of Dave’s suspects, and, most poignantly, with what people will do for love.

The Brandstetter series broke fresh ground with its classic “PI” mode shifted into the risky and risqué setting of California’s “almost anything goes.” Readers didn’t have access to much fiction that portrayed gay men as smart and caring—only the versions that showed gay men as lustful and disgraced. Hansen framed them instead with lush language and probing insight into how affection and need can press people toward the edge of society.

When the architect pleads with Brandstetter to exonerate handsome and sweet Larry Johns of the killing, he says, “You can help him, can’t you? . . . You find answers when the police don’t.” In true noir fashion, Brandstetter points out, “Only if the answers are there.” Then he asks, “Is he stable? Emotionally? Does he have hangups?”

Owens, the architect, understands he’s being asked whether young Larry Johns would go “out of his head” and kill another man for making a pass at him. “No. He’s easy and uncomplicated. There was a catch phrase a while back that sums up his attitude pretty accurately: ‘If it feels good, do it.’”

What Brandstetter must figure, through one persistent interview after another, is whether killing someone “felt good” to young Larry—or someone else.

This is the third of the 12-book Brandstetter investigation series being released this year by Soho Syndicate; the other two this month are Fadeout and Death Claims. Of the three, Troublemaker is the least astonishing, and dips the furthest into what horrified onlookers at the time: the casual man-with-man sex scene and the kinds of attraction valued. At times, the profligate characters and affairs distract from the neat plot twists and from Brandstetter’s calm pursuit of truth. Yet Troublemaker makes a good bookend to the two preceding titles and shows Hansen’s willingness to paint the whole California gay scene of that moment, not just the kindest and sweetest portions.

Beyond Brandstetter’s own understanding of love and longing, this re-issue also demonstrates poignantly the changes that mainstream America has experienced over half a century. Love, with all its vulnerability, remains worth pursuing in Hansen’s crime novels, no matter the gender of the beloved. Or the risks involved.