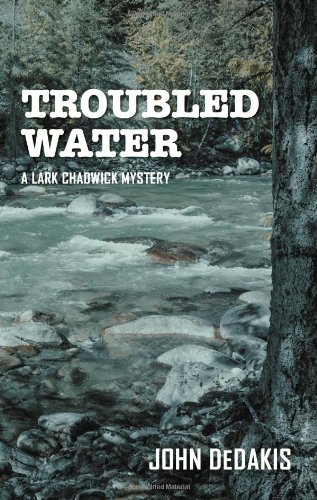 “She may have just gotten to this Podunk town, but this story is hers, dammit! And journalist Lark Chadwick would wrestle Anderson Cooper to the ground to make sure she gets the scoop.”

It seems a no-brainer to make a journalist the detective in a murder mystery.  They find stuff out for a living, have access to databases, and are curious about everything. An author can even choose from some old standards: grizzled cynical veteran, small town editor trying to keep the paper going, or young fresh-faced recent J school grad.

John DeDakis has chosen a hybrid of the last two. Young Lark Chadwick (a byline if ever there was one) is one her way to her new job at a new newspaper: the cops and courts beat in a small town in Georgia, when driving into town she discovers the body of a strangled girl. She calls the paper with her story.

These days reporters blog, often act as photographers, and still worry about the paper shutting down.

One of the joys of having a journalist write a book is that they really do know how to write. Good stuff at the top, recap in the middle, history at the bottom.  Sprinkle lots of detail throughout. That’s not such a bad outline for a mystery novel.

Lark's literally and figuratively on top of the story, the author demonstrates a very nice touch in the discovery of the girl, and this being a small town, there’s no shortage of suspects. A colleague who seems to show up everywhere, a high school boyfriend with anger issues, and the overeducated bag boy at the supermarket. What’s with the old reporter who got fired because the paper can pay Lark less? He’s none too happy.

The newsroom scenes ring true, and the meetings about how to delegate tasks because the story gets bigger by the minute has that frantic we-can’t-miss-anything feeling. Lark has to depend on unpaid but willing interns to do research for her, and they come through with flying colors

Which of the interns likes car stuff? Who’ll check social media—What do the victim’s Facebook friends say? What is tomorrow’s story and what’s for Sunday? Sunday is the big paper (lots of advertisements) so the story can go deep that day. Of course that only works if one has time to write a good story for Sunday in the middle of the daily grin

When Lark feeling frazzled she call on her old boss and mentor Lionel Stone. He’s already won a Pulitzer, so he can keep her focused on the story. When a second body shows up, the governor who is running for the presidency calls a press conference to showcase attention to the rampant violent crime in this country. The national media smells a possible serial killer.

She may have just gotten to this Podunk town, but this story is hers, dammit!

And journalist Lark Chadwick would wrestle Anderson Cooper to the ground to make sure she gets the scoop.