Trouble Is What I Do (Leonid Mcgill) 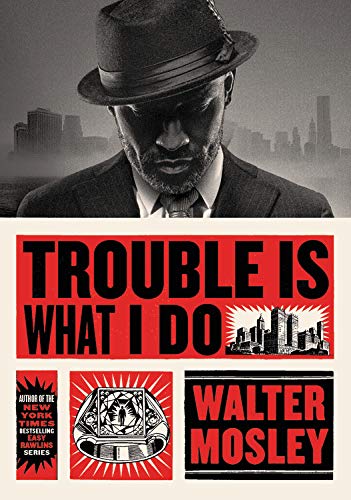 “Beyond the usual detective/PI action, Mosley creates a model for writing that moves off the ‘race card’ and back to true descriptions.”

When Walter Mosley writes a detective novel that’s short, it’s because every word counts, with no padding. Trouble Is What I Do plunges into the important details on the first page, as Leonid McGill explains why Mardi Bitterman works at the front desk of his office: “She’s the detective agency’s secretary-receptionist and also the human barometer that helps maintain my moral bearings in a world where sin is reflex and kindness a quick death.” She and Leonid have a word code that specifies her assessment of a client’s potential threat to Leonid. And this time she’s about to bring the folks back to him, so she’s saying they seem all right, and Leonid should treat them as such.

However, the seasoned detective still pockets his handgun while the clients are on their way: “Mardi’s intuition of human nature and potential was better than mine—but she wasn’t infallible.”

As it turns out, Mardi’s on the money this time, but the clients are bringing both trouble and life-threatening danger with them: All Philip “Catfish” Worry, who’s probably almost 100 years old, wants McGill to do is deliver a letter . . . to Catfish’s own granddaughter, who has no idea that he exists. Or, more importantly, of the color of his skin.

That ought to be routine, but the generation in between Catfish and the young lady, who’s about to get married, definitely doesn’t want the connection to take place. In fact, the young lady’s father has a contract out on Catfish, with one of the most deadly paid assassins that Leonid McGill has ever known about. And Leonid will have to place his own life on the line if he gets involved.

Walter Mosley spins a swift and sweet tale of friendship, family, clever twists, and what it means to be a moral person, even though, as Catfish describes Leonid, he’s “the kind’a brothah-man been on both sides’a the line.” Most of the other characters show their true selves quickly, like the man who took out the contract: “In an interview, he’d called Nigeria a shithole and its president a nigger in a hat. When there were protests, he simply stated, ‘In America, we believe in free speech.’” (Why does that sound familiar?)

Threats and revelations make this slim book—166 pages long in hardcover, but in a format that will fit in a large pocket—one that’s hard to put down. But beyond the usual detective/PI action, Mosley creates a model for writing that moves off the “race card” and back to true descriptions.

Here’s an example from the first appearance of his new client, complete with great-grandson in tow: “Behind the youth, a senior citizen trundled lightly. The young man had chocolate-brown skin. His elder was what they called redbone back in the day. . . . It described a light-skinned Negro. They both wore new blue jeans, checkered blue work shirts, and hard leather shoes that had counted more miles than a Fitbit could imagine.” Mosley extends this color-detail descriptive mode to others in the tale as well, like the dope dealer Patrice Sandoval, who has “fair skin and hair the color of finished maple wood,” and the massive Wolfman Chord: “Wolfman’s skin was a deep brass brown, and his face was that of an intelligent, inquisitive child.”

These stirring descriptions move Trouble Is What I Do from casual PI fiction to a statement of what Mosley’s been known to assert, ponder, and sometimes say from another direction: that we may be in a “postracial” society in America. If that means moving to characters who come in marvelous varieties of skin color and appearance—instead of tagged as “white” or “black”—many a reader and future writer may benefit greatly from this soon-to-be-classic crime investigation.