Trouble on the Books: A Castle Bookshop Mystery 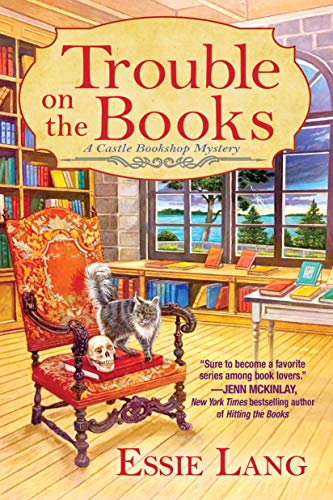 “Trouble on the Books is a charming cozy mystery populated with delightful people.”

Former literary editor Shelby Cox gets the opportunity of a lifetime when her Aunt Edie makes her 50% owner of Bayside Books. Not only that, she's asked to run the store's second shop located in Blye Castle, a prime tourist hot spot in upstate New York's popular Thousand Islands Region.

This is Shelby's first day on the job at the tiny castle bookshop, 300 square feet with newly renovated picture windows casting out on a view of Alexandria Bay. Tourist season is fast approaching, and Shelby is busy dusting and stocking shelves according to a detailed layout Aunt Edie has provided. She's pleased to see included in Aunt Edie's diagram a coffee station and a chocolate section.

But she's anxious, too. Though she's met Matthew Kessler, caretaker of the castle and grounds, she has yet to make the acquaintance of Loreena Swan. Loreena is the difficult to deal with volunteer coordinator of the Alexandria Bay Heritage Society, which is also housed in the castle, and from whom Bayside Books leases its space.

Sure enough Loreena shows up and the first thing she does is complain about the kind of books carried in the bookshop:

"You know, you have to bring in a whole lot more local books. That's what our tourists are looking for. And look at this, you have far too many mysteries."

Loreena is also quick to point out that a guidebook she authored, The Thousand Island Memories, is nowhere in sight. Shelby assures Loreena that her book is on order, and after a bit of impatient foot-tapping in her two-strap wedge sandals, Loreena replies ominously, "It better be," thus setting the stage for a very public and less than cordial verbal exchange.

Shelby stands her ground, but later worries that she's gotten off to a bad start. Aunt Edie assures her she handled the situation in exactly the right way.

After closing the shop, Shelby has time to do a little sightseeing before boarding the riverboat shuttle that takes her back home to the mainland. She heads out on a quick tour of the historic castle.

"The gray stone façade was softened by elegant carvings in the masonry, marking the top of each level. Two turrets rose above the upper corners at the front of the buildings, and each was flanked by two gargoyles . . . The double oak doors, ornately carved and sporting gleaming brass hardware, each had a small window up high and peepholes visible only to those who knew about them . . ."

While visiting Blye Grotto, a local cave where illicit rum trade had taken place during Prohibition, Shelby has a frightening few moments in the dark after which she finds the body of Loreena Swan in the river.

Matthew, the caretaker, hears her scream and comes running with a blanket, two glasses, and a bottle of Johnny Walker. After they calm themselves, the police show up. They conduct a search of the crime scene. They question Shelby and let her go, but they detain Matthew.

Shelby reports back to Aunt Edie, an aging hippie who is recuperating from knee replacement surgery, and tells her what happened. Over a finger's worth of Southern Comfort, Edie tells Shelby that Loreena comes from an old prominent family while Matthew has been a subject of conjecture for some time. Word is he was a former true crime writer and a prime suspect in the unsolved murder of his wife.

And it seems Loreena's body is not the first one to be found in that cave. A former owner of the castle, gangster Joseph Cabana, was also found dead there.

According to Aunt Edie:

"His body was found in the grotto also. They thought at the time it was gang related and that's why his ghost hangs around."

This little tidbit of information prompts Shelby to take up her own investigation which, in turn, keeps handsome Special Agent Zack Griffin of the Coast Guard Investigative Services on his toes making sure she stays safe.

Readers who are sticklers about visualizing the locales of the books they read, and are not familiar with upstate New York may have a bit of trouble picturing where this story takes place. An Internet visit to the Thousand Islands website will help a lot.

Trouble on the Books is a charming cozy mystery populated with delightful people.