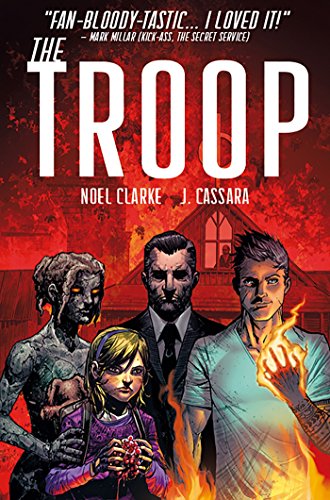 Good guys? Bad guys? Morality? Ethics? Who's to say where any of this plays in to The Troop. This is not the usual superhero fare. Yes, there are teenagers with powers that are beyond human. Yes, there is a nefarious organization hunting them down. Yes, there is a benefactor (that may or may not have the teens' best interest at heart). But that's about as close to X-Men or any other stereotypical mainstream superhero comic that The Troop gets.

The Troop is the story of several teenagers across the globe who have discovered, recently and not so recently, that they have powers. Ranging from being able to turn to pure graphite to pyrokinesis to mind control to inflicting any disease upon a target, the teens are a mutlitalented group brought together by a single man.

This man, Edwards, has an agenda, but that is never revealed completely. Is he building an army? Is he going to use the kids for his own purposes? Is he some deity that needs them contained? Does he actually care for the teens? Murky are the waters where Edwards is concerned. Which creates half of the tension of the narrative.

The other half is the fact that these teens are less than stable. Most come from broken homes, abusive homes, foster homes, and deal with self-cutting, drug addiction, sex addiction, rage issues, and just plain not giving two sh*ts. But even with their problems, they do learn to bond as a team eventually so they can find and help others like them.

And there are others. And the teens are not the only ones looking. Two other shadow factions compete to find kids with powers. One faction wants to capture and contain while another wants to kill and obliterate them from the planet. Who are these factions exactly? That isn't explained fully.

In fact, a lot is left unexplained as the comic series came to the end of its run. The door has been left open with a final panel stating "The End?", but so far this paperback seems to be the last release of the series. It is a shame since the comic book was well written and engaging. One reason was that it is strictly rated R. Nudity, sex, brutal violence, cursing, drug abuse, and domestic abuse probably exclude this series from the kiddies' shelves. Certainly a Mature Audiences read.

A solid series with great art, The Troop paperback is worth adding to any reader's shelves, especially if that reader is a fan of super powers but is tired of the same old, same old.